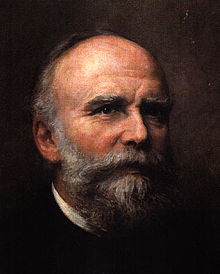 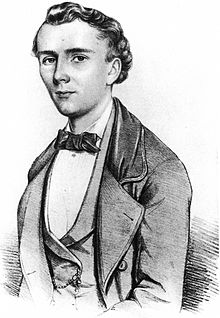 Eugen Langen as a student

Carl Eugen Langen (born October 9, 1833 in Cologne ; † October 2, 1895 near Elsdorf (Rhineland) ) was a German entrepreneur , engineer and inventor . Langen was significantly involved in the development of the gasoline engine and the "suspension railway" , which was first implemented in the form of the Wuppertal suspension railway . In addition, Langen was a member and sponsor of numerous colonial societies .

Eugen Langen is the most important son of the sugar manufacturer Johann Jakob Langen (1794–1869). JJ Langen went into business for himself in 1845 when he took over the Schleußner & Heck sugar factory . He ran the company with his sons Carl Otto, Gustav and Emil as "JJ Langen & Söhne". In 1857 Eugen Langen joined the company for his brother Emil after extensive technical training, among others at the Polytechnic in Karlsruhe . At the Polytechnic in Karlsruhe he had studied with the mechanical engineer Ferdinand Redtenbacher , but without graduating, whereupon Redtenbacher expressed his regret when saying goodbye that something could have become of him (Langen).

In 1864 Eugen Langen became aware of Nicolaus August Otto , a trained businessman who worked in his spare time on improving the atmospheric gas engine invented by the Frenchman Étienne Lenoir . The technically trained Eugen Langen recognized the potential of Otto's development and just a month after the meeting they jointly founded the world's first engine factory, “NA Otto & Cie.”. At the Paris World Exhibition of 1867 , their improved gas engine, the so-called flying piston engine , received the gold medal.

After this first factory went bankrupt, Langen founded a new company for the construction of gas engines in Deutz with outside capital, the Deutz gas engine factory , which later became part of the Klöckner-Humboldt-Deutz (KHD) group , today's Deutz AG . Eugen Langen took over Otto's debts of 18,000 thalers. To secure production, Langen hired the mechanics Gottlieb Daimler and Wilhelm Maybach . Now they were able to bring Alphonse Beau de Rochas' idea of producing a four-stroke engine to maturity.

In 1870, Langen and Emil Pfeifer and his son Valentin founded the company Pfeifer & Langen , a sugar manufacturing group that still exists today . With his technical knowledge he invented new production methods and used the most modern production methods at the time.

Langen was also successful in the field of rail vehicle construction: he was a co-owner and engineer of the Cologne-based van der Zypen & Charlier wagon factory , on whose premises a test track of around 100 m in length was built in the early 1890s. In contrast to the railways in Wuppertal and Dresden that were built and still in operation later, this test vehicle with internal rollers was suspended on two rails mounted within a hollow beam. With this in mind, on December 28, 1894, Langen prevailed over competitors with his suspension railway project and thus became the father of the Wuppertal suspension railway . The technically incorrect designation “suspension railway” comes from Langen himself: “ A system of hanging wagons. I called the thing 'suspension railway'. "(See article overhead conveyor )

Almost at the same time he was responsible for the construction of the Dresden suspension railway . In contrast to the 13.3 km long Wuppertal valley route in Dresden, it is a mountain cable car that is 274 m long. She's still driving today.

Eugen Langen died on October 2, 1895 on his country estate Haus Etzweiler near Elsdorf of the consequences of fish poisoning that he contracted at the opening ceremony of the Kiel Canal . His final resting place is in a family grave in Cologne's Melaten cemetery , location: HWG between lit. E and lit. F. In Elsdorf and in Wuppertal there is a school and a street named after Eugen Langen, as is there in Bergisch Gladbach , Karlsruhe , Schwerin and Cologne one Eugen-Langen-Strasse. The city of Cologne erected a monument to him in 1990 when they immortalized him as a stone figure on the Cologne council tower, with a motor piston in his hands and a sugar crate and a sugar loaf at his feet. The figure was designed by the Cologne sculptor Theo Heiermann . A former name in honor of Langen is or was the place name (Old) Langenburg (today Lumbira ) in German East Africa , which goes back to Langen's son-in-law Hermann von Wissmann . This points to Langen's references to German colonialism. He was chairman and one of the most influential members of the West German Association for Colonization and Export , in the Cologne department of the German Colonial Society , a member of the Colonial Council and the board of the Protestant Africa Association. After all, he was one of the financiers of the German-East African Society . In 1873 and 1880 Langen was chairman of the Association of German Engineers (VDI).

Langen was married twice. His first wife Henriette (1834–1872) was the daughter of the Basel paper manufacturer Andreas Thurneysen. She died giving birth to her tenth child. He then married his niece Hermine Schleicher (1849-1935). Fritz von Langen , Johann Gottlieb von Langen , Hans Rudolph von Langen , Arnold Langen were among his 13 children.