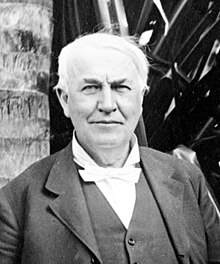 An inventor is a person who, through their own creative work, produces a previously unknown solution or application in the field of technology ( invention ).

The three constitutive characteristics of an inventor are that he:

The fact that problem recognition is an important prerequisite becomes particularly clear at the numerous inventors' fairs , where some very bizarre inventions are presented to trade fair visitors , where the most important achievement is the recognition of a problem that has not yet been solved.

The three mentioned constitutive characteristics of an inventor are also taken into account in the patent . In order to be granted a patent, it is necessary that the inventor describes the problem to be solved and can present a solution. In return for a property right , d. In other words , in order to grant a temporary monopoly of use , the invention must be disclosed. This means that it must be described by the inventor in such detail that a person skilled in the relevant technical field is able to understand the invention. This disclosure was the most important reason for the establishment of the patent offices at the end of the 19th century . It enabled inventors to build on the published inventions of other inventors and led to a technology push in all countries that set up patent offices.

The “problem recognition” of the constitutive definition of an inventor is also taken into account in the patent system: The required level of inventiveness can also be achieved in the patent system by finding previously unknown problems including their technical solution.

Well-known successful "permanent inventors" such as Thomas Alva Edison and Artur Fischer are usually good craftsmen and technicians or engineers .

The inventor is to be distinguished from the developer . Most successful inventors are also good developers because otherwise they would not be able to convert their own invention into a prototype or product.

In some countries, national inventor days are celebrated to honor the achievements of inventors for society .

In the legal systems, only natural persons are recognized as inventors. Legal persons , such as a GmbH , cannot invent anything and are never referred to or seen as inventors in the legal sense. Terms such as “innovative company” are legally meaningless. At best, you mention the fact that a company has many employed inventors.

No freedom of design

The question of whether or not a person is the inventor of an invention in the legal sense does not depend on the wishes or will of any of the actors involved (such as the inventor himself or his superior or his employer ), but is determined solely by the actual circumstances, whether a person has contributed materially to an invention or not. When naming inventors, both the omission of those involved in the invention and the addition of those who are not involved in the invention from or to the list of inventors are incorrect in the legal sense and can be corrected. In some cases, patent law systems provide for severe sanctions if the inventor is incorrectly named.

In all important legal systems around the world, inventions are seen as creations with a “work character”, ie as creations to which the effort and personality of the inventor made a significant contribution. This is why all of the world's major legal systems recognize that an inventor has rights to an invention. These rights go in two directions:

On the one hand, the inventor has the right to be named and published as such. This is an honorable aspect of his rights.

Right to apply for a patent

Often inventions are not made by one inventor alone, but by several people together, e.g. development teams in an industrial company. Then they are all inventors of the invention and are called "co-inventors" in the jargon.

The quality of a person as an inventor can neither initially nor later be legally shaped, but rather is determined by the course of things (factual contribution to the invention) in a similar way as, for example, parenting to a child is determined by the course of things. However, the question of authorization to apply for a patent can certainly be shaped. In this respect, as already mentioned above, the rights usually initially lie with the inventor. But there may be legal successions to this, e.g. B. by law (e.g. employee invention law or inheritance) or by contract (e.g. in the case of research collaborations beforehand or afterwards) or by court ruling. The legal successor is then entitled to apply for a patent, but does not become an inventor in the legal sense, but is referred to as the applicant for a patent application or the owner of a patent.

Register, effect of the entry in the register

The patent registers of practically all patent offices in the world register both the inventor and the applicant (s) = owner of a patent application. However, the entry there is not legally constitutive. Both the inventors and the applicants / proprietors may be different from the registered ones. Even without being mentioned in the register, B. be that there are other inventors who have been forgotten to name.

In Germany , the tension between employed inventors with regard to the rights to the invention is regulated by a separate law, the law on employee inventions .

Problems are often functional fixation (the technical term for "We have always done it this way, why should we do it differently") and a lack of capital or skill to make an invention market-ready, to sell it or to defend it from competitors.

Examples of inventors with inventor destinies are:

State or private inventors who exploit inventions can help avoid the fate of inventors, who are supposed to enable expensive patenting as a first step and exploitation in return for a participation granted in advance.

An inventor competition is a contest or a call for tenders to which companies, corporations, clubs or associations, but also schools, are called. The aim is to stimulate innovative, creative achievements within the framework of a competition on a productive and creative level, which is bound to a certain duration. Binding conditions of participation are set for the competition, to which all participants are bound. Among other things, each participant must own the intellectual property for their submitted invention. An expert jury will decide on the winners of the elimination within a period based on specified criteria after the presentation of each eligible invention. The prizes vary depending on who organizes the inventor's competition and can vary from a voucher to a trade fair weekend to amounts of money or funding for setting up a business. These competitions are an opportunity for inventors to draw attention to their ideas. For those who run these competitions, they are an opportunity to get in direct contact with the genius.

The inventors with the most patents are: