from Wikipedia, the free encyclopedia
This is the spotted version , flagged on August 21, 2020 . There is 1 pending change that has yet to be viewed.

The title of this article is ambiguous. For more people with a similar name, see Alfred Noble .

Nobel is the inventor of dynamite and the founder and namesake of the Nobel Prize . The chemical element nobelium was named after him. The plant genus Nobeliodendron O.C.Schmidt from the family of the laurel family (Lauraceae) is named after him.

Alfred Nobel was born in Stockholm on October 21, 1833. He was the third son of the Swedish engineer and industrialist Immanuel Nobel . He had two older brothers, Robert (1829-1896) and Ludvig (1831-1888), and the younger brother Emil Oskar Nobel (1843-1864). The latter died together with four other people on September 3, 1864 in an accident caused by experiments with nitroglycerin in Helenenborg. Alfred Nobel was not present at the company when the accident occurred.

One of his nephews was the Swedish-Russian oil magnate Emanuel Nobel (1859–1932), the builder of the first diesel motor ship, the Vandal . Nobel was great-great-great-grandson of the polymath Olof Rudbeck the Elder .

In 1841 and 1842 Alfred Nobel attended a school in Stockholm. In 1842 he came to Saint Petersburg , where his father, with the help of the Norwegian government , had founded a number of iron and steel works and supplied the Russian army . Thanks to the wealth of his father, Alfred enjoyed first-class training from private tutors. At the age of 17 he already spoke five languages ​​(Swedish, Russian, German, English and French).

In addition to his chemistry and physics studies, he was particularly interested in English literature. This displeased his father, who thought he was an introvert, which is why he sent him abroad. Nobel visited Sweden, Germany, France and the United States in quick succession. In Paris in 1850 he met Ascanio Sobrero , who had discovered nitroglycerin three years earlier , but considered it unsuitable because of its dangerousness. In 1859 he returned to Stockholm with his father.

Development of the safe ignition of nitroglycerin

Nobel showed great interest in the invention of nitroglycerine and, since 1859, directed his efforts towards introducing it into technology as an explosive . Between 1860 and 1864 he experimented with explosives in mining in the Ruhr area in Dortmund-Dorstfeld at the Dorstfeld colliery there . In order to be able to blow up nitroglycerin with greater certainty, he developed the initial spark in 1863 .

Several accidents occurred during Nobel's experiments with nitroglycerin; in an explosion in 1864 that destroyed his laboratory, his brother Emil and four other people were killed. After this accident, the Swedish authorities banned him from further experiments with nitroglycerin in the vicinity of inhabited areas, so that in 1865 Nobel moved a laboratory and factories at Vinterviken on Mälaren in western Stockholm . He built similar systems in Germany near Krümmel (Schleswig-Holstein) near Hamburg . In the same year he succeeded in mass production of nitroglycerin, which also resulted in a number of serious accidents.

Discovery of the safety of handling nitroglycerin

In order to reduce the danger of nitroglycerine while maintaining the same explosive power, Nobel experimented unsuccessfully with various additives. According to legend, coincidence finally helped: in 1866, during one of the numerous transports of nitroglycerin, an incident occurred in which one of the transport containers leaked and pure nitroglycerin dripped onto the kieselguhr- padded loading area of ​​the transport vehicle. The resulting pulpy mass caught the workers' attention, so they later reported the incident to Nobel. This finally succeeded in the longed-for production of a more safe detonation explosive. Nobel himself always denied that it was a chance discovery. He patented the process, optimized in a mixing ratio of 3: 1, in 1867 and called his product dynamite .

Since the need for a safer yet effective explosive was great at that time, also due to the heyday of the diamond fever, Nobel was able to quickly build a fortune with his invention. His companies supplied nitroglycerin products to Europe, America and Australia. Nobel himself was constantly traveling to sell his products. He owned over 90 dynamite factories around the world.

Relationship and correspondence with Sofie Hess

In 1876 Nobel met Sophie Hess in Baden near Vienna , who worked there in a flower shop . Nobel was 43 at the time, she was 26. Nobel did not marry and Hess became his lover for 15 years, until she became pregnant by another man. Nobel continued to support Hess financially afterwards and considered her in his will . Nobel and Hess wrote several hundred letters to each other during this time. In the letters Nobel et al. a. Expressing chauvinism , gross racism and anti-Semitism . After Nobel's death in 1896, the Nobel Foundation endeavored to keep the letters secret; she bought the letters from Hess for the considerable sum of 12,000 forints (around 300,000 US dollars), and in return Hess complied with the foundation's request not to publish anything about her relationship with Nobel. It was not until 1976 that the Swedish National Archives granted some scholars access to the letters; it was not until 2017 that all correspondence was published.

In addition to his travels, Nobel continued to conduct research with explosives. In 1875 he developed the explosive gelatine , in 1887 he patented ballistite ( low-smoke powder ). Nobel first offered the invention to the French government, which, however, rejected it because it had the prospect of an almost smoke-free powder already in development. Nobel then offered the invention to the Italians, who immediately bought it.

In France, Nobel was then linked in the press with espionage , he was arrested and his permission to conduct experiments was withdrawn. As a result of these events, Nobel moved to Sanremo in 1891 , bought a villa there, built in 1870, and spent the rest of his life there. On December 10, 1896, Alfred Nobel died of a cerebral haemorrhage in Sanremo.

Nobel's father had already achieved prosperity as an armaments contractor, among other things through the production of sea ​​mines that the Russian Empire used in the Crimean War . Alfred Nobel's most important inventions, dynamite and explosive gelatine, were, contrary to popular belief, unsuitable for waging war. The low-smoke ballistite powder was an exception. It revolutionized all firing technology, from pistols to cannons.

When Nobel's brother Ludvig died in 1888, a French newspaper inadvertently printed an obituary for Alfred Nobel. The headline read: Le marchand de la mort est mort ("The merchant of death is dead"). Nobel's wealth was explained by the fact that he had found the means to "kill more people faster than ever before". Alfred Nobel was appalled by this portrayal and began to occupy himself obsessively with the question of how posterity would see him.

He discussed war and peace intensively with Bertha von Suttner . In 1876 she replied to a job advertisement in the Wiener Zeitung Neue Freie Presse and accepted the position of private secretary at Nobel, but gave it up a week later. After years of exile in what is now Georgia , she became an important peace activist and exchanged extensive letters with Nobel. Nobel was keen on her cause from the start and admired her commitment, but considered it more promising to influence governments than to mobilize public opinion, as the peace movement did. The friendly correspondence impressed Nobel and inspired him to donate the Nobel Peace Prize, which Bertha von Suttner was also awarded in 1905.

In 1894 Nobel even bought the Swedish armaments company Bofors - although he actually detested the war. He linked arms production with the hope that one day the armies would refrain from war as soon as the deterrent effect of their arsenals had become large enough. 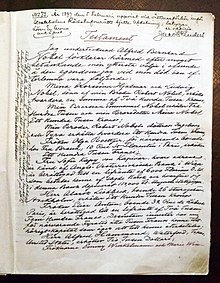 Since Nobel remained childless, he arranged for a foundation to be set up with his fortune of around 31.2 million crowns. A year before his death he drew up his will on November 27, 1895 in the presence of a few friends, but without a lawyer. Most of his fortune, approximately 94% of the total, he donated to the foundation.

Nobel determined that the interest from the Fund should be distributed annually as a prize to those “who have most benefited mankind in the past year,” divided equally to winners in five fields: physics , chemistry , physiology or medicine , Literature and Peace (“a part of those who worked most or best of all to fraternize peoples and to abolish or reduce standing armies, and to hold or promote peace congresses”). Nobel emphasized that nationality should not play a role, rather the most worthy should receive the award.

Nobel also determined who should be responsible for awarding the prizes: the Royal Swedish Academy of Sciences (Nobel had been a member since 1884) awards the awards for physics and chemistry, the Karolinska Institute the Nobel Prize for Physiology or Medicine and the Swedish Academy awarded the Nobel Prize in Literature. While these institutions are scientific, the Norwegian Nobel Prize Committee, a commission appointed by the Norwegian Parliament , is responsible for awarding the Nobel Peace Prize .

The Nobel Foundation was established in 1900. The following year, on the fifth anniversary of Nobel's death, the Nobel Prizes were awarded for the first time.

Nobel as a playwright

In the last year of his life, Alfred Nobel wrote the play Nemesis , a tragedy in four acts about Beatrice Cenci , based on the tragedy The Cenci , written in verse by Percy Bysshe Shelley . It was printed when he was already dying. However, the entire collection was destroyed immediately after his death, except for three copies, as it was perceived as scandalous and blasphemous . The book was not published until 2003, in a bilingual edition in Swedish and Esperanto . There are now translations into Slovenian (2004), Italian (2005), French (2008) and Spanish (2008). 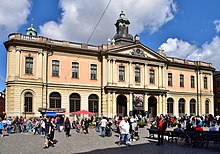 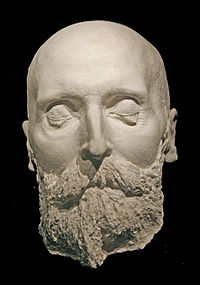