The title of this article is ambiguous. Further meanings are listed under Eisenwerk (definition of terms ) .

An iron , often called metallurgical plant , iron and steel or shortly hut designated, a plant for producing pig iron and steel based on iron ore . Today these are usually industrial plants . The largest iron and steel producing location in Germany is Duisburg . 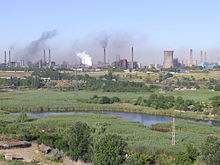 ArcelorMittal in the Romanian Galați

The first evidence of iron ore smelting is known from around 2000–1500 BC. However, these are isolated cases and the everyday use of iron in Europe is only around 800 BC. BC, i.e. with the beginning of the Iron Age , historically tangible. Back then, sponge iron (Eisenluppe) was produced using charcoal as a reducing agent in the so-called racing furnace . From the 13th century onwards, liquid pig iron was occasionally produced and converted into wrought iron . In 1735 the first blast furnace heated with coke was built. From 1864, steel was produced in the Siemens-Martin furnace . Direct iron reduction has been used industrially since 1950.

The basic materials for the production of pig iron are iron ore and coke . Depending on the type of admixture (gangue) in the ore, for example, limestone (in the case of admixtures containing silica ) or feldspar (in the case of admixtures containing lime ) are added as so-called "aggregates". The processing takes place by flotation or magnetic separation . The ore is crushed. Oxidic iron ores are reduced with carbon , resulting in pig iron, a brittle material due to the high carbon content that softens when heated within a small temperature range (see iron-carbon diagram ). Pig iron is mainly extracted in the blast furnace . The still liquid pig iron is then refined to steel in the converter . Nowadays the electric arc furnace is also used for steel production .