When feldspar is a large group of very frequently occurring silicate - minerals of the general chemical composition ( Ba , Ca , Na , K , NH 4 ) ( Al , B , Si ) 4 O 8 respectively. The elements indicated in brackets can represent each other, but are always in the same proportion to the other components of the mineral ( substitution ). Feldspars crystallize either in the monoclinic or in the triclinic crystal system , have an average Mohs hardness of 6 to 6½ and a very variable color that ranges from colorless to white, pink, green, blue and brown. The line color is white.

Feldspars are considered to be the most important rock-forming minerals in the earth's crust . The melting temperature range is 1150-1250 ° C. 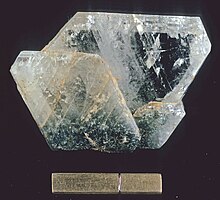 Feldspar is made up of the words field and spat . Both feldspars and feldspars can be found in the specialist literature as plural forms .

For centuries, miners generally referred to minerals and rocks as spars if they had the property of being particularly easy to ( completely ) split . The perfection of the cleavage was often shown by the existing, visible cracks and by the fact that fine leaves ("spades") detached themselves from the mineral or rock body when striking with a hammer.

The term feldspar came up around the middle of the 18th century , when one learned in mineralogy to differentiate between the different types of mineral. However, there are various theories about the exact origin of this name. In 1783 , for example, Urban Brückmann asked himself whether the feldspar could have received its name based on its characteristic type of occurrence in the form of fields or patches in granite and other types of rock (never as whole corridors, rocks or mountains). On the other hand, René-Just Haüy suspected in his work Traité de minéralogie in 1804 that the name could have been chosen based on the fact that fragments of feldspar were often found in the fields. The feldspar should therefore be understood as “spar from the fields” and an indication that feldspar gradually passed into soil due to weathering.

Phase diagram of the feldspar series at 900 ° C

Based on the end links orthoclase , albite and anorthite , the feldspars can be divided into three different groups:

Alkali feldspars are mixed crystals of the Ab-Or mixed crystal series with the end members albite (NaAlSi 3 O 8 ) and potassium feldspar (KAlSi 3 O 8 ) or orthoclase / microcline . They form the mixed crystals anorthoclase, sodium sanidine and sanidine and have a high proportion of potassium and sodium . However, they can only be mixed stably at high temperatures. During cooling, segregation occurs, which is expressed in sodium-rich lamellae in potassium feldspar (perthite) or in potassium-rich lamellae in albite (antiperthite). The process itself is known as perthitic segregation.

Plagioclase (also soda lime feldspar), crystals of the Ab-An mixed crystal series with the end members albite (NaAlSi 3 O 8 ) and anorthite (CaAl 2 Si 2 O 8 ), on the other hand, are characterized by a high content of calcium and sodium . Since no macroscopic differences can be seen, the mixed crystals are subdivided according to the proportion of anorthite: albite (0–10%), oligoclase (10–30%), andesine (30–50%), labradorite (50–70%), bytownite (70-90%) and anorthite (90-100%). This mixed crystal row of the plagioclase also has temperature-dependent segregation, which, however, is less pronounced than with the alkali feldspars and only shows up in microscopically thin lamellae in the crystal. There are three miscibility gaps , which are again differentiated according to the proportion of anorthite and are referred to as peristerite segregation (2–16%), Bøggild segregation (47–58%) and Huttenlocher segregation (67–90%). 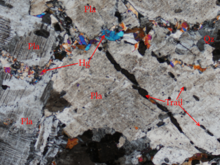 Thin section of an albite-rich plagioclase (Pla) from Lofoten. The polysynthetic twins can be seen well under crossed polarizers. Muscovite (Hg) and quartz (Qz) are also in the picture. Image width 3.3 mm.

Ternary feldspars are located in the interior of the triangle made of potassium feldspar-albite-anorthite with an increasingly large miscibility gap with falling temperatures.

An individual mineral can also be designated by means of percentages: For example, an on-off mixed crystal made of 60% albite and 40% anorthite with from 60 to 40 or even only briefly from 60 to 40 and is called based on this composition as andesine.

Feldspars mostly appear in the form of tabular or columnar, often twinned crystals and are found in igneous as well as metamorphic and sedimentary rocks .

Feldspattyp which is found in a given igneous rock, depends on the chemical composition and temperature of the initial melt from: Kalifeldspate form at comparatively low temperatures in high silica magmas , which upon cooling rocks granite and rhyolite form. If, on the other hand, the melt is rather poor in silicon dioxide and crystallizes at a comparatively high temperature, then plagioclases arise, which are then found in rocks such as gabbro or basalt .

The resulting is a clay mineral.

Some varieties of feldspar such as labradorite or orthoclase are used as gem stones if they are of suitable quality .

Besides kaolin and quartz, feldspar is an important component in porcelain production .

Particularly pure feldspar is used as the starting material for dentures ( inlays , veneers ). The mineral rock is ground, cleaned and burned. Chemical processes play no role here. The ceramic manufactured from it is very similar in its physical properties to the natural tooth substance, which means it fits perfectly into the tooth .

In the manufacture of stoneware tiles and slabs, feldspar is used to sinter the glaze in one operation . Before the body is fired , the glaze is applied and heated to around 1350 ° C in the oven. The feldspar contained in the shards melts and, in addition to the strength and cohesion of the workpiece, also ensures that the glaze is bonded to the finished tile.