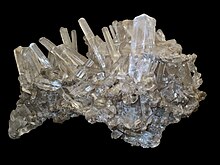 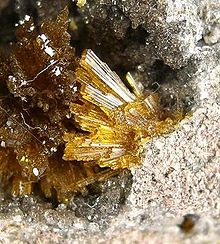 Uranophane -alpha from the Rössing Mine, Erongo, Namibia

The monoclinic crystal system ( ancient Greek μόνος mónos "alone", "only" and κλίνειν klinein "incline", "bow") belongs to the seven crystal systems in crystallography . It includes all point groups that have a twofold rotational or rotational inversion axis in exactly one direction . This is the only direction in this crystal system that has a special symmetry. The word monoclinic simply means inclined and refers to the two mutually inclined axes with an angle other than 90 °.

There are two lists for the position of the monoclinic axis:

The 1st setting is rarely used today. As a result, there are also the conditions for the monoclinic grid system (in the 2nd setting):

The monoclinic grid system is denoted by m.

In monoclinics there is a base-centered Bravais lattice in addition to the primitive one . The axes are chosen by convention so that there is always a C-centering. Different setups, mainly the I-centering, are not uncommon, however. The same applies here that the centering should be selected in which the monoclinic angle is as close as possible to 90 °.

Point groups in the monoclinic crystal system and their physical properties

To describe the monoclinic crystal classes in Hermann-Mauguin symbology , the symmetry operations with respect to given directions (viewing directions) are given in the grid system. In the monoclinic, the three viewing directions are the directions of the a (<100>), b (<010>) and c-axis (<001>) of the grid system. If in the detailed Hermann-Mauguin symbol the directions without a symmetry element are designated with 1, then these directions are omitted in the short form. In this case one can no longer differentiate between 1st and 2nd setting.

Characteristic for the space group symbols of the monoclinic crystal system is exactly one axis with a symmetry other than 1.