Direct piezo effect: mechanical pressure shifts the positive (Q +) and negative center of gravity (Q–). This creates a dipole , an electrical voltage on the element.

The direct piezo effect was discovered in 1880 by the brothers Jacques and Pierre Curie . In experiments with tourmaline crystals , they found that mechanical deformation of the crystals creates electrical charges on the crystal surface , the amount of which is proportional to the stress. Today, PZT ceramics (such as lead-zirconate-titanate ) are mostly used for piezo elements .

Macroscopically , the effect could already be described in the context of continuum mechanics at the beginning of the 20th century. The microscopic description was only possible through a thorough understanding of the discrete structure of condensed matter . A more detailed microscopic treatise was given by Richard M. Martin in 1972.

The first applications were piezoelectric ultrasonic transducers and, soon after, quartz oscillators for frequency stabilization. With the patent on the charge amplifier granted to Walter P. Kistler in 1950 , piezoelectric measurement technology achieved its breakthrough for broad industrial application.

By the directed deformation of a piezoelectric material to form microscopic dipoles within the elementary cells (displacement of the charge areas ). The summation of the associated electrical field in all unit cells of the crystal leads to a macroscopically measurable electrical voltage. Directional deformation means that the applied pressure does not act on the sample from all sides, but (for example) only from opposite sides. Conversely, a deformation of the crystal or the piezoceramic component can be achieved by applying an electrical voltage.

There are essentially three different effects:

All three effects can also be reversed; That is, a force can be generated by the action of a tension by changing the volume.

Like any other solid body, piezoelectric bodies can also perform mechanical vibrations. In piezoelectrics, these vibrations can be excited electrically and in turn cause an electrical voltage. The frequency of the oscillation depends only on the speed of sound (a material constant) and the dimensions of the piezoelectric body. With a suitable attachment, these natural frequencies are hardly influenced by environmental influences, which means that piezoelectric components such as oscillating crystals are very well suited for use in precise oscillators , for example for quartz watches .

In the case of crystals, the crystal symmetry is another criterion for the occurrence of piezoelectricity. The piezoelectric polarization does not occur when the crystal has a center of inversion. Piezoelectricity can occur in all 21 non-centrosymmetric point groups , with the exception of the cubic point group 432 . In other words, a unit cell must not have a point at which a point reflection converts the crystal into itself.

The best known material with piezo properties is quartz (SiO 2 ). Quartz crystals have the non-centrosymmetric point group 32 . Each Si atom sits in the middle of a tetrahedron made up of four oxygen atoms. A force acting in the direction of the base surface (crystallographic direction: [111]) now deforms these tetrahedra in such a way that the compressed tetrahedra are electrically polarized and a net voltage occurs on the surfaces of the crystal (in the [111] direction).

Technically used materials that show a stronger piezo effect than quartz are often derived from the perovskite structure, e.g. E.g .: barium titanate (BaTiO 3 ). The cubic perovskite modification itself has the centrosymmetric point group and is therefore non-piezoelectric, but below a critical temperature - the piezoelectric Curie temperature T C  - the material can change into a non-centrosymmetric perovskite structure (rhombohedral / tetragonal, see lead Zirconate titanate ). It then shows a spontaneous polarization and has ferroelectric properties.

Other piezoelectric crystals are berlinite , minerals of the tourmaline group , seignette salt and all ferroelectrics such as barium titanate (BTO) or lead zirconate titanate (PZT). However, BTO and PZT are normally not used as single crystals, but in polycrystalline form (ceramics).

Perovskite unit cell of piezoceramics. A dipole forms below the Curie temperature.

Industrially produced piezo elements are mostly ceramics . These ceramics are made from synthetic , inorganic , ferroelectric and polycrystalline ceramic materials. Typical base materials for high-voltage actuators are modified lead-zirconate-titanate (PZT) and lead-magnesium-niobate (PMN) for low-voltage actuators .

The composite of the PZT ceramics (Pb, O, Ti / Zr) crystallizes in the perovskite crystal structure. Below the piezoelectric Curie temperature, distortions of the ideal perovskite structure create a dipole moment .

In ceramic piezo elements, the internal dipoles are still disordered after the sintering process , which is why there are no piezoelectric properties. The Weiss districts or domains have an arbitrary spatial orientation and balance each other out. A clearly measurable piezoelectric property can only be impressed by an external constant electric field with a few MV / m, whereby the material is heated to just below the Curie temperature and then cooled again. The imprinted orientation is then largely retained ( remanent polarization ) and is referred to as the polarization direction .

Sintered piezo elements are characterized by efficiencies of 25% - 50% and permittivity numbers ε r around 1000.

The rotation of the Weiss domains by polarization leads to a slight distortion of the material and a macroscopic increase in length in the direction of polarization.

The macroscopic description in the context of continuum mechanics is shown below. Only a linear approximation is taken into account between the sizes considered. Nonlinear effects such as electrostriction are neglected here. 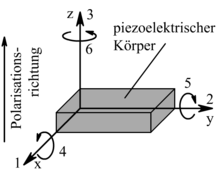 Definition of the axis directions

A coordinate system is selected to describe the spatially different properties . An x, y, z coordinate system is usually used for indexing, the axes of which are denoted by the numbers 1, 2, 3 (axis 3 corresponds to the polarization axis). The shearings on these axes are numbered 4, 5, 6. Based on these axes, the piezoelectric properties are expressed in equations with tensors .

where d, e are the piezoelectric coefficients, E is the electric field strength (V / m) and T is the mechanical stress (N / m²). The first equation describes the direct, the second the inverse piezo effect.

; on the other hand

The two coefficients can be related to the elastic constants :

Example of the structure of the coefficient matrices for the crystal class 4mm , to which PZT also belongs

The tensors given above are usually rewritten in matrix form ( Voigt notation ). This results in matrices with hexavalent components that correspond to the axis definition shown above. The piezoelectric effects are then described by means of two coupled equations in which the dielectric displacement D is used instead of the polarization.

It is common practice to summarize the elements of these equations in the coupling matrix. The most important material parameter for the inverse piezo effect and thus for actuators is the piezoelectric charge constant d. It describes the functional relationship between the applied electric field strength and the strain generated by it. The characteristic sizes of a piezoelectric transducer are different for the different directions of action.

In the area of actuators , two main effects are relevant. For these two effects, the equation for the expansion is simplified as follows

In general, the applications can be divided into three areas:

The occurrence of the piezoelectric charge in the event of mechanical deformation is used in force, pressure and acceleration sensors. The resulting charge can be converted into an electrical voltage with a low source impedance using a charge amplifier . With the other option of charging a capacitor with this charge and measuring its voltage with a voltage measuring device with the highest possible resistance, poor insulation resistances, for example due to moisture, can strongly falsify the result and prevent slow deformations from being recorded. 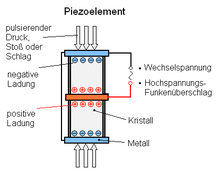 Piezo actuators can be differentiated according to the mode of operation (quasi-static or resonant) or according to the direction of the effect used. The distinction between transverse effect (transverse effect, d31 effect), longitudinal effect (longitudinal effect, d33 effect) and shear effect (d15 effect) results in three different basic elements for piezoelectric actuators. However, the shear effect is used significantly less often than the other two effects in actuators, since d15 actuators are more complex to manufacture. For multi-dimensional movements, several piezo elements have to be combined in such a way that they act in different directions.

Even actuators that operate in the kHz range can be regarded as quasi-static, as long as the operating frequency well below the first resonant frequency is the system. The high accuracy and the great dynamics predestine the piezo actuator for positioning tasks and for active vibration damping. Typical changes in length and thus travel ranges are 0.1% of the actuator length and therefore in the order of 100 µm for the largest actuators available. The electric strength of the material, the high operating voltages and the saturation curve of the material have a limiting effect on the travel ranges. The short travel ranges of piezo actuators can be increased by various means, e.g. B. by lever or by special designs such as the bimorph bending element. This is a combination of two transverse expansion elements. Opposite polarization or control of the elements causes the actuator to bend.

Examples of the quasi-static application of piezo actuators are

Piezo actuators operated resonantly are mainly used to generate ultrasound and in piezo motors such as B. traveling wave motors are used. In piezo motors, the small travel ranges of piezo actuators are added up using various principles, so that very large travel ranges can be achieved. Depending on the motor principle, piezomotors work quasi-statically or resonantly.

In these applications, a mechanical vibration of a piezoelectric solid is electrically excited and again electrically detected. A fundamental distinction is made between two types

The piezoelectric transformer is used as a component as a form of resonance transformer for generating the high voltage in the area of ​​the inverter . It is used to supply fluorescent tubes (CCFL), such as those used as background lighting in liquid crystal displays .

The piezoelectric effect is used in piezo lighters , where a sudden high pressure (hammer) is used in a piezo igniter to generate a brief high electrical voltage. The spark discharge then ignites the gas flame. Impact fuses such as in the warheads of anti-tank weapons (Panzerfaust / RPG-7 ), piezo microphones (crystal microphones ), piezo loudspeakers in headphones, batteryless radio switches, piezo sirens and buzzers are further uses.

A number of micromechanical sensors make use of piezoelectricity, e.g. B. acceleration sensors , yaw rate , pressure and force sensors as well as ultrasonic sensors, microbalances and knock sensors in motor vehicle engines.

Some micromechanical actuators are also based on piezoelectricity: Piezomotors (squigglers), ultrasonic motors , e.g. B. for lens autofocusing or clock drives , in the field of micro and nanopositioning systems are scanning tunneling microscope , scanning electron microscope and the atomic force microscope piezoelectrically driven systems. In valve technology , injection nozzles from cars (series production started in 2000 for diesel engines), proportional pressure regulators and print heads from inkjet printers should be mentioned. Pickups , electroacoustic delay lines as in older PAL or SECAM color televisions, batteryless radio technology (switches) and optical modulators are also piezoelectric components. The feeding technology uses many of the components mentioned. The piezoelectric crystal is also used to generate cold atmospheric pressure plasma, which is mainly used for surface activation , germ reduction and odor reduction in medicine.