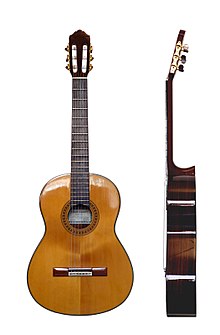 A string instrument , also a chordophone ("Saitenklinger"; from Greek chordē "string", phōnē "voice", "sound") is a musical instrument in which one or more strings are used to generate sound , which are stretched between two points. In most cases the vibration energy is directed to a resonance bodytransmitted and converted into sound energy there. Different pitches are achieved either by dividing the strings or by having (at least) one separate string for each tone. In any case, the shorter, the tighter the tension and the thinner the string, the higher the tone. String instruments include lute instruments (with stem and lyres ), zithers, and harps . The strings are usually plucked ( plucked instrument ) or bowed ( string instrument ).

Idiophones , for example in the form of knocked stones, are considered to be the oldest musical instruments that have existed since humans developed a feeling for rhythm. They were followed by flutes that were probably played from the Aurignacien (40,000–31,000 BP ). String instruments are much younger if their origin is assumed to be the occurrence of bows with one string from the late Upper Palaeolithic or the Mesolithic . It is not known whether these bows were first used as hunting bows or musical bows . The oldest representations of a musical bow can be found on 15,000 year old cave drawings. The simple musical bow with attached resonance body or the mouth bow reinforced by the player's mouth is considered to be the archetype of all chordophones. It consists of a flexible wooden stick, around the ends of which a piece of intestine or a cord is drawn to stretch the stick into a bow. When struck with a small stick or plucked with your fingers, several fundamental and overtones are produced, which can be amplified by a sound box attached to the bow, such as a calabash . A consistent further development leads from musical bows to harps and lyres with also freely stretched strings. For zithers , the strings of which run parallel to a string carrier, an origin from idiochord (string and string carrier are made of the same material) bamboo tube zithers is conceivable (today's examples valiha and chigring ).

The oldest stringed instrument that has survived is multi-stringed: the 4500 year old harp of Queen Puabi of Ur . The Sumerians and Egyptians played harps, the ancient Greeks knew several lyres, the best known were kithara and lyra . Bow harps are in the Egyptian Old Kingdom from around 2500 BC. On wall paintings and are played in modified forms in Africa with a focus on Central Africa ( kundi ) and Uganda ( ennanga ). In contrast, bow harps have practically disappeared in Asia, apart from the Burmese saung gauk , the eastern Afghan waji and the central Indian bin-baja . In India, the vina -called rod zithers and lute instruments developed from the bow harps. In the Middle Kingdom from the 16th century BC. Angled harp that was added in BC has disappeared in Africa except for the Mauritanian ardin . In the Middle East emerged from the Mesopotamian harps to the 17th century, popular in the Middle Ages vertical angle harps chang and Central Asia the smaller harps with horizontal sound ( "Steppe harp").

The further development from a simple bow to a complex modern string instrument has produced a wide variety of types. Most, however, were only in use for a limited period of time, such as the lyres, which were very popular in ancient times. Homer already describes the four-stringed lyre Phorminx . This string instrument consisted of a sound box made of wood, turtle shell or later made of metal, over which several strings were stretched. The strings were guided over bridges (yokes), of which the upper cross yoke held and tensioned the strings. The strings ran parallel to the soundboard. The instrument was played with the fingers or the pick by plucking or scribing. With the second hand, the strings were muted or shortened, thus determining the pitch.

The historical lyres, also called yoke lutes, are among the best-documented instruments of antiquity with numerous ancient finds. The oldest finds point to Mesopotamia in the 3rd millennium BC. In the course of history, the lyre was adapted to requirements and was subject to various changes. This resulted in shapes with up to 15 strings. Since around the 8th century BC BC it is also known on the Iberian Peninsula , later a seven-string lyre can be traced back to the Celts . Today's Arabic lyres are the tanbura in Egypt , the kisir in Nubia , and the simsimiyya on the Red Sea . The lyres in Ethiopia include the krar and the beganna . The mechanically operated hurdy-gurdy has only the name of the old yoke lute, its string arrangement corresponds to a violin.

String instruments can be systematically classified in various ways . A common classification is based on the Hornbostel-Sachs system .

Another approach is to classify according to the method by which the strings are excited to vibrate:

The instrument maker differentiates between three basic forms of stringed instruments , regardless of how they are played, and assumes the type of vibration transmission to the resonance body , which has a direct impact on timbre and development.

The crate Bass belongs to this classification to the class of harps , the chopping board is the Zithern assigned, and the violin is an instrument from the group of sounds .

This purely structural classification is only suitable to a limited extent for the general description of individual instruments because it seems to contradict normal understanding. There are also a large number of mixed forms, i.e. the piano is a zither without a soundboard and the Japanese harp ( Koto ) is a zither from a structural point of view, but its vibrations are transmitted via movable bridges, but without a neck.

In order to create the specific sound of the instrument, as with all acoustic instruments, all permanently installed parts and their specific material properties (wood grain and density, alloy of metal parts, cast or forged, string thickness) are involved in their entirety. In instruments that do not have a sound box, such as electric guitars without a sound box (solid body guitars), only a small part of the vibration energy is converted into sound. In order to be able to hear the vibrations of the strings louder in these cases, they are usually picked up by a pickup and amplified electrically.

Classification of musical instruments according to the type of sound generation