The banjo is a plucked instrument . A round plywood frame, which is covered with a membrane made of fur or plastic, serves as the resonance body of the long-necked lute . The membrane can be tensioned using a metal ring and tensioning screws . The banjo has a long neck with frets , but in its original form it was fretless. Banjos have four to eight strings.

The banjo, which can also be classified as a spit-frame lute, was developed by West African slaves who were shipped to the New World . They brought along narrow wooden pikes of the ngoni type . The related closest African musical instrument is the round gourds -Spießlaute akonting . The first mention of a banjo forerunner in the Antilles with the name banja dates back to 1678.

Design and style of play

With the five-string banjo, the top string ( chanterelle ) does not go the full length of the neck, but rather runs to a tuning peg attached to the fifth fret. This string sounds higher than any other string on the instrument (similar to the ukulele ). Common tunings for 5-string banjos are gDGcd (modal), gCGcd (Double C). The open mood gDGHd is mostly used in bluegrass .

In hillbilly and minstrel music (old-time) , the five-string banjo is usually played in the clawhammer style. The strings are struck with the thumb and the nail of the middle finger (a few players use the index finger instead) in the downward movement. A commercially very successful exponent of this style was Uncle Dave Macon , one of the first stars of the Grand Ole Opry .

Until the middle of the 19th century, the banjo was a folk instrument of the rural population, there were almost no notes, it was learned mainly through tradition. Briggs' Banjo Instructor from 1855 provides information about the tunings, strings and playing technique of the time.

Around 1860 a new style emerged that became popular with urban populations in North America and England: the banjo was now plucked like the guitar, and an extensive literature was created. Banjos with gut strings were used, the standard tuning was gCGHd. In retrospect, this style is now called Classic Banjo. In the 1920s, interest in this music waned.

The guitar style, also called the 3-finger style, was assimilated by folk music in the southern states, Charlie Poole is a prominent example. From the 3-finger style , the Scruggs style developed in the 1940s (see Snuffy Jenkins , Earl Scruggs , Don Reno ).

In bluegrass music, the five-string banjo is mainly played in the so-called scruggs style. Scruggs played arpeggios in which the melody-important notes are emphasized. The strings are plucked with the thumb, index and middle finger. Finger picks are used to increase the volume and brilliance .

Bluegrass banjos have a wooden resonator on the side facing the musician . The resonator reflects the sound towards the listener and, together with the tone ring, creates a higher volume and additional overtones. Old-time banjos are open to the musician (“German model”), which is why they sound less overtone. 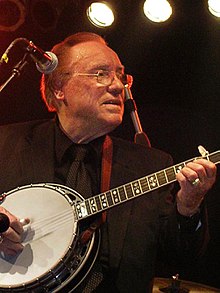 Around 1945 Don Reno and Earl Scruggs independently revolutionized the role of the five-string banjos. Inspired by Snuffy Jenkins , they developed what was later called "bluegrass banjo".

Another exponent was Tony Trischka, who briefly acted as teacher of Béla Fleck .

Internationally known banjo players are or were Derroll Adams , Earl Scruggs , Pete Seeger , who also wrote a textbook on the banjo game, and Béla Fleck, who considerably expanded the stylistic spectrum of the banjo. Other famous banjo players are Bill Keith , Alison Brown and Tim Allan . The American actor Steve Martin is also considered a good banjo player, as well as Les Claypool ( Primus ), Peter Tork ( The Monkees ) and Rod Davis ( The Quarrymen ).

In German-speaking countries, among others, Rüdiger Helbig, who published two German-language textbooks on banjo playing, helped the banjo to gain popularity.

The four-string banjo was mainly used in the early days of jazz ( Dixieland ). One distinguishes

Especially in Ireland is Tenorbanjo played in the mood GdAE '. While the tenor banjo is used as a rhythm instrument in jazz by struck chords , it is mainly used as a melody instrument in Irish music. The tuning of Gdae corresponds to the tuning of a violin , but one octave lower. Since the tuning is a fourth lower than in jazz, stronger strings are drawn (e.g. 0.013 / 0.020 / 0.030 / 0.040 inch).

With the tenor banjo, too, a (German) model open at the bottom is differentiated from one with a wooden floor (English model).

Pieces of music with banjos

One of the few pieces of music with banjos as the main element of the melody that made it into the charts is the instrumental piece Washington Square , published by the Village Stompers in 1963 . It peaked at number two on the Billboard Hot 100 .

The five-string original form of the banjo has undergone a series of further developments and modifications, such as the tenor and plectrum banjo , the six-string guitar banjo and the eight-string mandolin banjo . In the modern banjo, the fur is no longer made of leather, but of plastic, which is more stable against fluctuations in humidity and temperature. The tuning pegs , which were simple wooden dowels in early banjos, have now mostly been replaced by metal pegs with planetary gears , more rarely with worm gears .

Another significant development is the from the company Gibson introduced clay ring. This is a cast metal ring (often advertised as bell bronze) that rests on the wooden frame and over which the membrane is pulled. He is critically responsible for sound education.

In addition to the classic four and five-string banjos, there are other designs in which the top is made of fur or plastic and the necks are borrowed from other instruments. So there are guitar banjos, mandolin banjos and ukulele banjos. Cello and bass banjos, on the other hand, have a longer scale length and a larger frame diameter. Cümbüş, which was developed in Turkey in the 1930s, is considered a cross between the American banjo and the oriental oud .