This article is about the Irish band, see Dubliners for more meanings .

The Dubliners were one of the most famous and influential bands in Irish folk music .

The band was formed in 1962 at O'Donoghue's Pub in Dublin as The Ronnie Drew Folk Group .

Members of the band were:

The changes in the line-up had different reasons: Individual members, such as Kelly, Drew, Lynch and McCann, left the band temporarily or permanently to pursue solo projects, while others withdrew from active musical life. Ciarán Bourke suffered a cerebral haemorrhage during a performance in Bournemouth in 1974, which resulted in his death in 1988. Luke Kelly died in 1984 of complications from a brain tumor. Ronnie Drew died of throat cancer on August 16, 2008 in Dublin. The last of the founding members died on April 5, 2012, Barney McKenna ("Banjo Barney"). Due to his death, John Sheahan announced shortly thereafter that the Dubliners would split up after their 50th anniversary tour and give their last concert on December 31, 2012. Sean Cannon, Eamonn Campbell, Patsy Watchorn and the banjo player Gerry O'Connor, who accompanied the Dubliners on tour after the death of Barney McKenna, have been performing under the name The Dublin Legends since 2013 , as John Sheahan owns the naming rights " The Dubliners ”owns.

There were short-term substitutions in the cast list, for example due to illnesses of band members during the tours. For example, on the 2010 tour, Patsy Watchorn was replaced by Al O'Donnell during the last few weeks and in 2011 by Chris Kavanagh from the performance in Hanover. This plays the banjo, sings and was u. a. known as the interpreter of Luke Kelly songs, especially because of his similarity.

From around 1967 to 1974 the Dubliners were the most prominent Irish folk group and contributed to the popularity and rise of Irish folk music worldwide, a development that was later continued by groups such as The Fureys , The Chieftains , The Pogues and Clannad .

The Dubliners' songs have appeared in countless different compilations over the years with dozens of different record labels, with the same album being (re) released under different titles as well as different albums under the same title. There are also various “best of” and “greatest hits” compilations as well as live albums on the occasion of their tours.

Among other things appeared:

The concert from autumn 1983 is the last recording with Luke Kelly, who was already ill at the time

published in 1988 for the millennium of Dublin, contains only songs from and about Dublin

Album released for the 40th anniversary of the band. It contains partly new, partly old recordings. Every member who has ever played for the Dubliners can be heard on it. For the new recordings, the Dubliners teamed up with the two ex-members Ronnie Drew and Jim McCann, who were still alive.

Double CD recorded at the legendary 40th anniversary concert of the band in Dublin's Gaiety Theater. In addition to the then current line-up, ex-member Jim McCann, who was still alive, and Ronnie Drew, who died in 2008, were on stage. 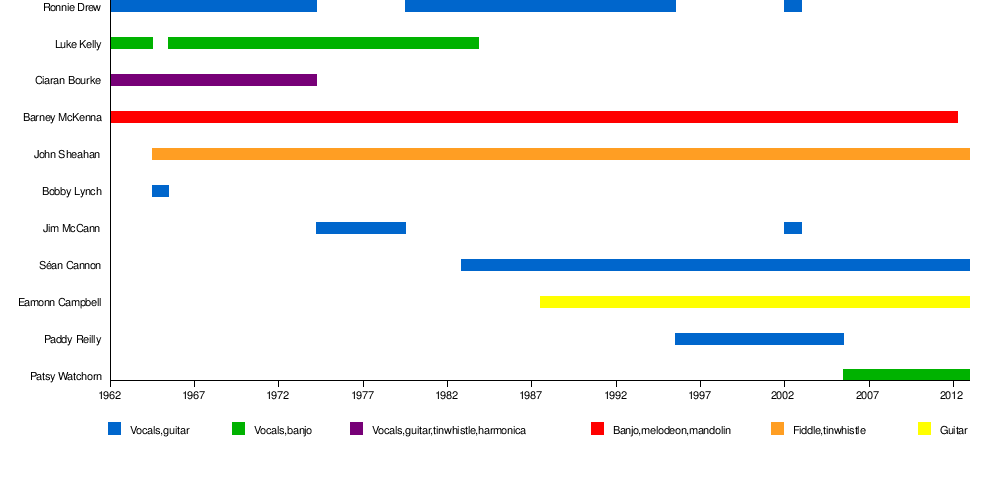 Commons : The Dubliners  - Collection of images, videos and audio files