The title of this article is ambiguous. For the Greek male name see Polydoros .

Polydor ( LC 00309) is the name of a German music label that today belongs to the major label Universal Music of the Vivendi media company .

The following important information is missing from this article or section:
Japan branch is missing (founded in 1927), generally very German-oriented, cf. en: List of Polydor Records artists
Help Wikipedia by researching and pasting it .

Established as an export label

The German Grammophon AG was allowed because of the Treaty of Versailles outside the German Reich her trademark voice of his master , and the name gramophone no longer use. In Europe, the Gramophone Company kept the trademark rights in Hayes, UK . Company boss Emil Berliner sold America rights in 1924 to the Victor Talking Machine Company . In the same year, Deutsche Grammophon AG therefore founded the Polydor brand as an additional label for export . The name was created from the Greek (πολύς polýs "much" and δῶρον dōron "gift") - many gifts . Well-known dance orchestras of the 1920s and early 1930s with this label were Arthur Briggs , Oskar Joost , Ilja Livschakoff and above all Paul Godwin , well-known interpreters including Max Hansen , Lilian Harvey , Johannes Heesters , Theo Lingen , Otto Reutter and Claire Waldoff .

In 1941 Siemens & Halske AG took over Deutsche Grammophon. The shellac records then appeared temporarily under the Siemens-Polydor label . Until production was largely stopped due to a lack of material around 1943, some high-quality pressings were made by Hans Georg Schütz , Friedrich Schröder , Willi Stech and Mimi Thoma, among others . Since the Polydor records were still intended for export, Swing titles were also released .

The Deutsche Grammophon pressing works in Berlin-Tempelhof survived the Second World War largely unscathed. Production was resumed as early as 1946. From then on, the company published almost all recordings of dance and light music under the different colored Polydor labels. In 1949 the uniform red star logo was introduced. The first hit of the post-war period was the song Capri-Fischer , interpreted by Magda Hain in 1943 , which was also recorded by Rudi Schuricke for Siemens-Polydor in the same year, but was only successfully published in its version after the end of the war. Other successful interpreters in the first half of the 1950s included Lale Andersen , Bully Buhlan , Renée Franke , Friedel Hensch and the Cyprys , Evelyn Künneke , Bruce Low , Liselotte Malkowsky , Werner Müller , Jupp Schmitz , Gerhard Wendland and Helmut Zacharias , as well René Carol with the hit red roses, red lips, red wine (first gold record after the war; 1953).

From 1953, the labels with the orange star logo appeared. In 1955 Polydor released individual records in their own covers . The music producer in the studios Hamburg, Cologne and Vienna provided with Peter Alexander , Caterina Valente , Freddy Quinn , Max Greger , Margot Eskens or Lolita numerous successful artists who met exactly the tastes and led the German hit parade. They were particularly successful with operetta recordings. In the 1950s and 1960s, the conductor Franz Marszalek produced a series of operetta cross-sections and so-called composer pictures, which were sold millions of times. When rock 'n' roll became popular in the second half of the decade , Studio Vienna in particular made a name for itself under producer Gerhard Mendelson with cover versions of US hits. Peter Kraus and Ted Herold became the most successful German interpreters of this music genre.

Bill Ramsey , Gus Backus , the Hazy Osterwald Sextet and Bert Kaempfert's orchestra were among the popular Polydor stars of the early 1960s. In 1963 the red logo, which is still used today, was introduced. As more and more English beat titles pushed their way into the German hit lists towards the middle of the decade , sales of German-language music fell significantly. The Polydor also initially had difficulties adapting to the new taste. Indeed, with Roy Black , Karel Gott , Renate Kern , Chris Roberts or Wencke Myhre one could also establish successful pop interpreters. The repertoire was expanded towards the end of the decade with international performers such as the Bee Gees , Jimi Hendrix , The Who or the German protest singer Franz Josef Degenhardt . The most successful LPs now came from James Last .

In the 1970s, Polydor, which has been part of Polygram since 1972 , released records by well-known national and international stars, including Barry Ryan , Neil Sedaka , Daliah Lavi , James Brown , Plácido Domingo , Konstantin Wecker , Ougenweide , Georg Danzer and Barclay James Harvest , Slade and ABBA . Hits by Volker Lechtenbrink , Hubert Kah , Rolf Zuckowski , Haindling , Level 42 and Patricia Kaas followed in the 1980s . Also was Cyndi Lauper and her band Blue Angel with Polydor under contract before they stormed the charts solo. Polydor's chart successes in the 1990s came from Matthias Reim , Rosenstolz , Ronan Keating , Andrea Bocelli and André Rieu , among others . In 1998 Seagram acquired PolyGram and combined it with Universal Music . In 2000, the French conglomerate Vivendi merged with Seagram to create the world's second largest music group Vivendi Universal , headquartered in France. On April 20, 2006, the shareholders decided to change the company's name back to Vivendi . The Polydor label is still present today as its record label. 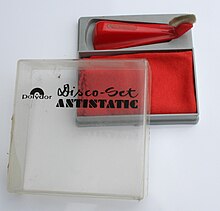 Antistatic cloth and brush for record surface and needle

Piezo rod from Polydor for the static discharge of records

Since an official hit parade in Germany has only existed since 1959 and the company Polydor has only saved data since 1975, the number 1 hits of the years 1951–58 are only determined on the basis of record sales figures that were mentioned in press reports.