Roy Black is the first music album by the German pop singer Roy Black of the same name . Among the total of 14 titles, six of which were ultimately released on singles , three of his previous hits and 11 new releases were. The producer and conductor of all recordings was Hans Bertram , who also worked under the pseudonym Axel Weingarten . The album was released on the German market in the summer of 1966 as a long-playing record on the Polydor label (order number: 249 057). In 2001 it was first re-released on CD on the same label . 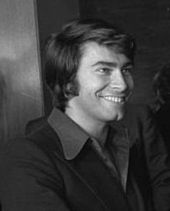 Label of the single Ganz in Weiß , released in 1965

After his breakthrough with the title You are not alone and the number one hit Ganz in Weiß (both 1965), Roy Black was considered one of the most successful up-and-coming stars of the Polydor record company . In the mid-1960s, due to the beat wave, this had to contend with a shrinking market share of domestic music productions. After Roy Black with the title Irgendjemand liebe dich landed in third place at the German Schlager Festival in 1966 , the originally rather wait-and-see Polydor finally wanted to produce a music album by the singer. Among the 14 songs that the producer Hans Bertram selected for this LP project were three that had already appeared on singles: You are not alone , All in white and Put your heart in my hands .

The 11 first releases of the album should also prove the versatility of the young star. Roy Black was able to perform a German-language cover version of the musical melody Hello, Dolly! Made famous by Louis Armstrong . as well as two English-language recordings from the repertoire of Elvis Presley and Trini Lopez . The title Ask only your heart is based on the Brazilian folk song Meu limão, meu limoeiro , which became known in the English-speaking world as Lemon Tree in the version by Trini Lopez, among others. The rest of the titles came mainly from the pen of Roy Black's house composers Rolf Arland and Werner Twardy . Most of the lyrics were written by Lilibert and Kurt Hertha . The 11 new tracks were recorded on June 30th and July 9th, 1966 in the Polydor studio in Cologne-Höhenberg .

The record cover shows a full-body portrait of the casually dressed artist and his signature against a red background. The simple design made it look surprisingly innovative for the time. The same motif was finally used for the cover of the single Frag nur dein Herz (A-side: Good Night My Love ; Polydor 52 728), which stayed in the German single charts for 29 weeks. The cover of the Wencke Myhre LP, released in the same year, was designed in a similar way, only with a blue background . On the back of the record sleeve, in addition to some photos of the dark-haired heartthrob, there was a list of titles and extensive advertising text in which Roy Black was described as the “young man of our time” . In addition, “he is popular with young girls and he gets along with older women.” Otherwise, people pointed to his modesty and natural charm. From a commercial point of view, the album, which was listed at number 2 on the German LP hit parade, was extremely successful. It laid the foundation for the singer to establish himself as an album artist in the course of his career. The 1967 release Rot ist dein Mund / Hallo Dolly was a free advertising single from the ARAG group (Polydor 005 408).