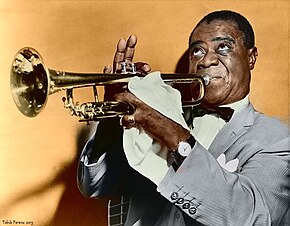 Louis Armstrong always gave July 4th, the Independence Day of the United States , in 1900 as his date of birth. This was particularly common among the African-American part of the United States' population when their own date and circumstances of birth were unknown or did not correspond to social expectations. It also fits that he made himself a year older and brought his birth forward to the turn of the century, which made it easier for him as a teenager to access the establishments of Storyville , the entertainment district of New Orleans . Only from his baptismal certificate , discovered posthumously in 1983, does the actual date of birth - August 4, 1901 - emerge.

He was born in the poorest of circumstances and only grew up temporarily with his mother. As a seven year old he had to sell newspapers. In early 1913 he was admitted to the Colored Waif's Home for Boys, an institution for homeless, African-American youth, for causing troubles, after he shot his uncle's revolver in the air on New Year's Eve. In the strictly organized institution, Armstrong learned the basics of playing cornet . Until 1918 he managed to get by with small jobs and first appearances as a musician in the city's red light district .

Beginnings as a musician

From 1918 to 1919 Armstrong played regularly in the band of Fate Marable on a Mississippi steamer, which entertained the passengers on the long trips upriver. In 1918, 15-year-old Bix Beiderbecke is said to have heard him in Davenport . In 1918 he replaced the trumpeter King Oliver in the band, which he led together with the trombonist Kid Ory . When Oliver moved to Chicago , Armstrong followed him in 1922 and joined King Oliver's Creole Jazz Band as 2nd trumpeter, which played in the Lincoln Gardens Café on the South Side of Chicago. There are already first sound documents from this period (including Chimes Blues ). According to numerous reports from contemporary witnesses, the duo Oliver and Armstrong is said to have made music history with their two-part break improvisations, especially during their live performances. In 1924 Armstrong married Lilian "Lil" Hardin , the band's Memphis- born pianist. Shortly thereafter, on her advice, he switched to the band of Fletcher Henderson , where he quickly became a star soloist and was no longer in the shadow of his teacher Oliver.

The Hot Five and Hot Seven 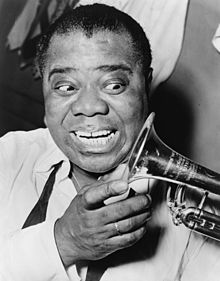 In 1925 Armstrong left the Henderson band. From that year onwards, he and Lil made numerous recordings, mainly with quintet and septet formations called Louis Armstrong and His Hot Five and Hot Seven , respectively . Many of these recordings are now considered milestones in jazz history. Trend-setting recordings such as West End Blues (voted jazz record of the century by jazz critics), Potato Head Blues , Struttin 'with Some Barbecue , Wild Man Blues , Fireworks and Heebie Jeebies were made . In some of these recordings he also demonstrated his talent as a singer, especially scat singing. Also of note is his collaboration with pianist Earl Hines in the late 1920s. In 1927 Armstrong switched from the softer sounding cornet to the harder trumpet following the general trend .

German single Onkel Satchmo's Lullaby in a duet with Gabriele , 1959

In 1926 he had his first hit on the Billboard charts with Kid Orys Muskrat Ramble , which was followed by 78 more by 1966. In February 1932 he had his first number 1 hit with a version of All of Me . Since the early 1930s, during which the new jazz style of swing developed, he appeared following the new fashion mainly in big bands (including the orchestra of Luis Russell ) and quickly became known inside and outside the United States. From 1932 onwards numerous tours took him to Europe and later all over the world. In 1947 he broke up his Big Band and returned to his origins, New Orleans Jazz and small formations (Louis Armstrong and his All Stars feat. Velma Middleton ). In the 1950s and 1960s, it was especially his talent as a singer and entertainer that made him a world star. He achieved a further increase in his popularity through the Hollywood films in which he participated, such as B. The Glenn Miller Story , The Top Ten Thousand and Hello, Dolly! .

Not least because of his worldwide fame, at the height of the Cold War in the 1950s, the US government sent him to the East-West conflict as a musical mobilizer. From 1956 he traveled with artists such as Benny Goodman to the Eastern Bloc as well as the countries in Africa and Asia that were courted by both the United States and the USSR . In 1956, 100,000 people came to a stadium in what is now Ghana to experience it. Together with other jazz stars like Dizzy Gillespie and Duke Ellington , Armstrong also used his popularity on his tours to demand human and civil rights for African Americans . In 1957, for example, he refused to travel to the USSR on behalf of the State Department because of racial segregation in the United States .

His tireless energy and his many appearances took an early toll on his health. In the face of several serious crises, the doctors advised against playing the trumpet in order to protect his health. Committed to the audience and his ambition, he has since then concentrated more on singing. In 1969 he interpreted the song We have all the Time in the World by John Barry and Hal David for the James Bond film On Her Majesty's Secret Service with George Lazenby as 007. During this time, however, with a few exceptions (including the singing duets with Ella Fitzgerald , for example on Ella and Louis ), because of his physical weakness, can no longer build on the groundbreaking achievements of the 1920s and 1930s as a jazz trumpeter and jazz singer.

Louis Armstrong died of a heart attack in New York in 1971 at the age of 69. His grave is in Flushing Cemetery in Queens . 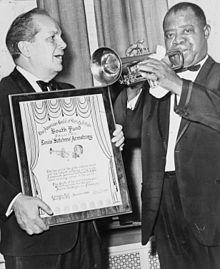 The President of the American Guild of Variety Artists Youth Fund presents Armstrong with an award, 1966 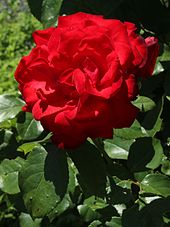 Armstrong had his musical roots in New Orleans jazz. He played a decisive role in the development of this style away from collective improvisation towards the prominent solo and founded the "star soloism" in jazz. He also set technical standards for jazz trumpeters , especially in the 1920s . He is regarded as one of the most important instrumental soloists in jazz.

Stylistically, he influenced almost all of the trumpeters who followed the traditional jazz styles. His influence can still be felt today with younger musicians such as Wynton Marsalis . In addition, Armstrong, whose unmistakable voice established its worldwide popularity, is one of the most famous singers in jazz , alongside Billie Holiday and Ella Fitzgerald.

In 1970 Samuel Darragh McGredy introduced a red floribunda rose , which he named "Satchmo" in honor of Louis Armstrong.

The St. Louis Blues by WC Handy and the romantic What a Wonderful World by George David Weiss and Bob Thiele hardly have any jazz hits anymore. Armstrong also used musical melodies ; Mack the Knife ( Mackie Messer ) from Bertolt Brecht's Threepenny Opera and Hello Dolly are probably played more often in Armstrong's interpretation than in the original version for the theater stage.

Armstrong's nickname "Satchmo" is a shortening (contraction) of Satchel mouth (in German about "Schulranzen-Mund"), an allusion to the size of his mouth. As a child he was also called Gate mouth ("barn door mouth"). Another variant of his nickname in the early days was Dippermouth (about "ladle mouth"). This name inspired the title Dippermouth Blues .

He used to pronounce his first name Louis in English (like Lewis) and not in French.

In 2016, the Louis Armstrong House Museum acquired the hitherto unknown and only film that showed Louis Armstrong in the studio recording of Satchmo plays King Oliver in 1959 . The 33-minute long film was made by music producer Sid Frey according to professional standards, but was not used any further and Frey also concealed its existence.