The red light district of Frankfurt am Main at night 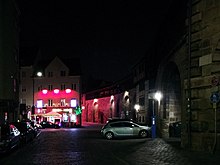 Entrance to the Nuremberg red light district at the Frauentormauer

The Reeperbahn in Hamburg at night

Larger chains in the field of films and accessories, such as the company founded by Beate Uhse with the eponymous Sexversand and Orion , have managed to commercialize sex outside of the red light milieu. In the area of table dance bars , companies like the Hamburg “Dollhouse” are trying to follow the same path in order to develop new groups of customers. By differentiating it from prostitution, the company should appear more serious and thus also appeal to visitors who feel repulsed by the red light district.

The term “red light district” is usually associated with criminal behavior (e.g. drug trafficking , human trafficking , blackmail ). The battle for supremacy is a competition between indigenous groups, ethnic groups, and rocker groups like the Hells Angels . In Germany, by organized crime spoken.

In 2011, Peter F. Müller shot the documentary film We were the Miljö about former Cologne “red light kings” .