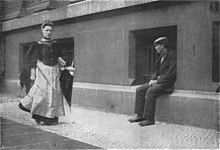 Berlin pimp expects prostitutes in 1890 after a medical check-up

Pimping in the legal sense in German-speaking countries is the exploitation of a person who engages in prostitution and the commercial promotion of prostitution. Pimping is a criminal offense in many countries. A pimping person is called a pimp , among other things .

“Pimp” comes from the expression “to hold (with) you”. Since the 15th century it has meant “keeping a relationship closed”, which originally meant an extramarital relationship between man and woman . In contrast to the meaning of “pimp” as a prostitute , which has been documented since the end of the 15th century, the term “pimp” (probably coined by the police) in the sense of “urban prostitute protector” emerged in the 19th century.

Colloquial terms for pimp are Lude or Loddel , ironically the term Vollkaufmann is used. Euphemistically is the protector of prostitutes spoken. In Austria, a pimp is colloquially called "Strizzi" or Bavarian "Peitscherlbua", using the Viennese dialect. Female pimps are called brothel mothers , often they are former prostitutes. In the late Middle Ages , the pimp was known as a woman host .

Prostitutes often have to cede income to pimps because they are dependent on them or because they fear the use of violence. Especially in countries where prostitution is illegal , cheap places ( street prostitution , contact sauna , red light district ) are usually part of a pimp's “territory”. He defends his area against others with violence and demands money from all prostitutes working within the area under threat of violence (a type of protection racket ), which they cannot defend themselves against, as they are doing an illegal activity themselves. In return, some pimps actively refer clients , protect prostitutes from violent suitors or collect money from unwilling clients . Sometimes, however, pimps also join forces and pursue their "trade" together, sometimes with shared tasks, with other criminal offenses often being added. Well-known groups of this type were, for example, the GMBH or the Nutella gang .

Other types of addiction pimps exploit are drug addiction (the pimp is also a dealer ) and the plight of illegal immigrants (often as part of the criminal trafficking of human beings ).

Emotional instability and general emergencies are also partially exploited to create a relationship of dependency in a targeted manner. For example, the pimp pretends to love an inexperienced young woman (or a ( homosexual ) young man) and even appears to be in a partnership with his victim . As a “proof of love” he then demands of his “partner” to make himself available to third parties sexually. In the Dutch-speaking area, the term loverboy has established itself for this , cf. Loverboy method .

In the German Empire since 1900, pimping was a criminal offense. The so-called Lex Heinze inserted Section 181a into the Reich Criminal Code :

" A male person who receives a livelihood in whole or in part from a woman who is commercially fornication by exploiting her immoral income, or who grants protection to such a woman habitually or out of self-interest in relation to the practice of the indecent trade or is otherwise beneficial (Pimp) is punished with imprisonment for not less than one month. "

If it was the prostitute's husband, if there was threat or violence involved, the prison sentence was at least one year. In addition, along with the prison sentence, the judges could order subsequent workhouse accommodation, which could last up to two years.

Proof of having accepted money from a prostitute was sufficient for a conviction for pimping. The literal naming of a type of offender (“pimp”), which was previously unusual in criminal law, was also questionable.

In the German Reich , the National Socialists increased the sentence to five years in prison in 1934 , and workhouse accommodation was discontinued.

In 1973, the text of the law in the Criminal Code was formulated in a gender-neutral way with regard to perpetrators and victims, so that since then women have also been able to punish themselves for pimping and, in addition, male prostitution is covered by the protective purpose of the norm .

The criminal offense of pimping is regulated today in the Federal Republic of Germany in § 181a StGB as follows:

and in this regard maintains relationships with her that go beyond the individual case.

(2) Anyone who interferes with the personal or economic freedom of movement of another person by promoting the exercise of prostitution by the other person through the mediation of sexual intercourse and with a view to maintaining relationships with them shall be punished with a prison sentence of up to three years or a fine go beyond the individual case.

With the Prostitution Act , which came into force in 2002 , the legal certainty of prostitutes in Germany was improved and paragraph 2 of the criminal law was changed to its current form. Previously it was said

"(2) A prison sentence of up to 3 years or a fine is punished for anyone who commercially promotes the exercise of prostitution by arranging sexual intercourse with another person and maintains relationships with them that go beyond the individual case."

The regulation on pimping in the Austrian Criminal Code :

(1) Whoever takes advantage of that person with the intention of obtaining ongoing income from prostitution for another person shall be punished with imprisonment for up to one year.

(2) Anyone who intends to obtain continued income from prostitution for another person, exploits this person, intimidates them, prescribes the conditions for the practice of prostitution or exploits several such persons at the same time, is punishable by a prison sentence of up to two years to punish.

(3) Anyone who commits the act (paras. 1 and 2) as a member of a criminal organization shall be punished with imprisonment for up to three years.

(4) Anyone who intimidates a person from giving up prostitution must also be punished with a prison sentence of up to three years.

In the Swiss Criminal Code , criminal acts in connection with pimping are described under the term “promotion of prostitution”.

Anyone who brings an underage person to prostitution,

who brings a person to prostitution by taking advantage of their dependency or a financial advantage,

Anyone who interferes with the freedom of action of a person engaged in prostitution by monitoring them during this activity or determining the place, time, extent or other circumstances of prostitution,

who detains a person in prostitution,

is punished with imprisonment of up to ten years or a fine.