This article treats trade as an economic activity. For the technical term "trade" for the joint of pliers see pliers .

A trade is any permitted economic self-employed activity that is carried out on one's own account, on one's own responsibility and for a certain period with the intention of making a profit , with the exception of freelance work and primary production . In a narrower sense, trade is understood to mean the manufacturing and processing trades in industry and craft as well as various service companies . A trade is carried out by a trader in a business enterprise . 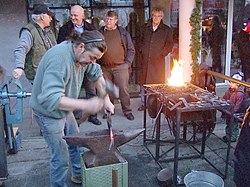 The following definition has prevailed in German trade law : A trade is any permitted, independent, externally recognizable activity that is carried out according to plan, for a certain duration and for the purpose of making a profit and is not a free profession . This results in the following characteristics:

An activity is directed outwards when it is clearly visible to third parties. The intention to operate a business, which is not apparent to third parties, is not sufficient for this.

Self-employed is someone who is essentially free to organize their work and determine their working hours (see Section 84 (1) HGB). Those who are not bound by instructions are therefore self-employed. This must be a legal independence, economic independence alone is not enough.

However, the activity must not belong to the liberal professions. These usually require a higher education and are particularly characterized by the personal management and cooperation of the business owner (for more detailed explanations see the article Freelance occupation ).

Planned for a certain duration

Commercial activity carried out as planned and for a certain period of time means that this may not only be carried out occasionally. According to Karsten Schmidt , the activity must be planned forever and ever . In addition, the actions taken must be aimed at a large number of transactions . However, it is not important if a business is / can only be operated seasonally (e.g. beer tent at the Oktoberfest or beach chair rental). Rather, it is crucial that business is carried out repeatedly and regularly (objective) and that there is a corresponding intention (subjective).

One of the other criteria for the existence of a business is the intention to make a profit, which is still present even if losses occur for some time . Here, however , a distinction must be made between commercial activity and pure hobby . However, there is no officially defined de minimis limit to delimit these two areas. However, two amounts of income tax law can be used as an auxiliary criterion: On the one hand, the profit of € 256 per year or slightly higher stated in Section 22 EStG , and the exemption limit of up to € 410 per year tax-free according to Section 46 (3) EStG.

In Germany, the exercise of a trade is subject to the trade regulations . According to this, every commercial activity must be registered and de-registered with the responsible municipality ; Colloquially one speaks of a "trade license". It should be noted, however, that the start of business does not depend on the time of applying for a trade license, but on the start of self-employment.

Based on the freedom of occupation laid down in Art. 12 of the Basic Law , the freedom of trade was laid down in the trade regulations. According to this, everyone is free, within the framework of other laws, to operate a trade and freely choose their profession , workplace and training facility . Furthermore, the right to the established and exercised business enterprise has been recognized as a property right within the meaning of Art. 14 GG since June 1990 . The legal restrictions on freedom of trade, apart from personal reliability , can be divided into three main groups:

Section 6 GewO removes some activities from its scope, for example fishing , raising children for a fee (such as day care ), teaching and the activities of lawyers and notaries .

Trade is divided into the four groups of industry , craft , trade and other (including services , house trade and publishing ). In 1878, the trade supervisory authority was introduced in Germany , which monitors compliance with labor and pollution control regulations and, based on this, can also close businesses in the event of gross violations.

If a commercially established business operation is necessary for the exercise of the trade, the trader is considered to be an actual merchant and is obliged to keep books . Merchants according to the HGB must prepare balance sheets .

The trade law attaches different requirements to these types of trade, especially with regard to the permit.

Every business enterprise is also subject to trade tax ( Section 2 (1 ) of the Trade Tax Act ). This is a crucial difference in tax treatment compared to freelancers. This disadvantage for the entrepreneur has been alleviated in recent years through higher tax exemptions ( Section 11 (1) No. 1 GewStG) and the crediting of income tax.

In Austria the trade is mainly regulated in the trade regulations 1994 (GewO). According to Section 1 (2) GewO, an activity is carried out commercially if it is carried out independently, regularly and with the intention of generating income or other economic benefit, regardless of the purpose for which it is intended; Here it makes no difference whether the intended income or other economic benefit is to be achieved in connection with an activity falling within the scope of the GewO or in connection with an activity not subject to the GewO. Proof of qualification is a prerequisite for exercising regulated trades and partial trades in accordance with § 16 GewO. Proof of competence is to be understood as proof that the applicant has the technical, including commercial, knowledge, skills and experience to be able to independently carry out the activities peculiar to the trade in question. The regulated trades listed in Section 94 GewO must demonstrate the required reliability.

The Switzerland has no uniform national commercial law, as can be found in the German or Austrian Industrial Code. Certain activities or professions are regulated and require that a license application be submitted. No special qualifications are required for regulated activities . The granting of the license depends on criteria such as reputation, the establishment of a supervision (asset manager) or the existence of an admission restriction (travel trade). For regulated professions (notary, doctor), however, the completion of a special training or proof of professional experience in the area is required. Some activities are regulated at the federal level, others at the cantonal level. Anyone who wants to become self-employed must fill out a registration form that must be submitted to the compensation office . This confers the status of self-employed .