The title of this article is ambiguous. Further meanings are listed under Office (disambiguation) . 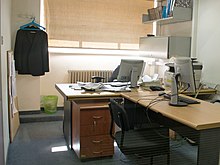 An office (formerly Bureau , loan word to French bureau , depending on context, orderly room , office , business rooms , office rooms , study rooms ) is, in the predominantly a space management activities such as writing , reading , numeracy are exercised and discuss. Today it is mostly referred to as a law firm by authorities and lawyers .

Depending on the task, an office serves as a work space for a single person or for many people ( open-plan office ) . Office furniture such as desks , cupboards and / or shelves as well as means of communication such as telephones and fax machines belong to the equipment of an office . Since around the mid-1980s, most offices have also had computers that are used both for processing files and for communication. The first offices were equipped with computers as early as the late 1970s.

New office concepts take account of the changes in office work due to the reduction of bureaucracy and the developments in information and communication technology .

The digitization allows overclocking and transparency of the office work, and in turn a more precise specification and verification of performance . According to a study by ISF Munich , "intellectual activities are structured and work processes in the office are organized independently of the individual skill of the individual". The office world is changing with digitization in a radical way that is comparable to industrialization in the 19th century. Digitization also creates new forms of work (often grouped under the term " New Work "), which in turn brings new challenges for office design.

A study presented to the World Economic Forum in 2016 and placed at the center of discussion there predicted that automation would eliminate five million jobs over the next five years; this applies above all to office work. However, this view is controversial.

The word office (in the 17th century: “desk”, “office” and “business room ”) is derived from the French bureau (meaning development “cloth, table covered with cloth, office desk, office”), which in turn is derived from the old French bure and its diminutive burel , which translates into German as “coarse wool”, which was later used to cover desks or desks. This old French term has its origin in Latin : There the word burra means “shaggy garment”. The connection to the desk lies in the development of the meaning from “cloth” to “table covered with cloth” to “desk” and finally to “room with desk”, the current meaning. Originally, the French spelling of the bureau or, in the plural, the bureaux was in use in German-speaking countries . In today's French and in some other languages, the word office refers to both furniture and room, but in German only the room.

Different usage of the word

Office is also the name of an authority or a body , for example the Federal Bureau of Investigation (FBI) in the USA, the Bureau International des Poids et des Mesures ( BIPM ) in Paris or the office for the coordination of the chartering of ocean-going vessels in Moscow.