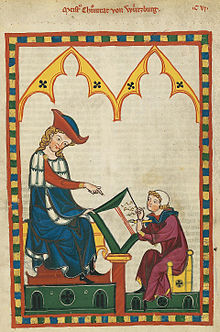 Rembrandt : Titus writing at the table

Writing (from Old High German scriban , from Latin: scribere to scratch with the stylus on a board ) refers to the recording of characters , letters , numbers or musical notes . Its counterpart is reading , the process of absorbing and understanding written information and ideas. Writing is an elementary cultural technique and one of the basic skills . The history of writing is inextricably linked with the history of writing . The lack of literacy anchored in a culture is called illiteracy .

In order to write, a medium and a writing device are required (see manual writing ). Another requirement is the ability to write ( writing skills ).

In the transferred sense, writing also denotes the creative process of writing lyrical and poetic texts. The result of such literary writing is literature . The surface and depth structure of texts can differ from the actual expression; this is the subject of literary studies .

Not only the text , but also the form of the writing can be an expression of artistic creation, in calligraphy . Every scribe has his own, more or less legible handwriting ; this can be the subject of a scriptural comparison . A handwritten work is called a manuscript . The personal character (the handwriting of an artist or author) is called manner . It influences the intelligibility of the text .

→ Main articles : History of writing  and history of the written media

A multitude of techniques were already in use in ancient times, such as chiselling in stone, scratching in clay and writing with ink on palm leaves , papyrus , parchment and paper . Up until the invention of printing , writing was the only way to capture language on a medium. The typewriter and the computer or word processor have revolutionized writing.

In ancient times, the ability to write was so valuable that an entire profession, the scribes , made a living from it. This lasted in many parts of the world until the introduction of elementary schools and compulsory schooling , which made it possible to teach reading and writing to broad sections of the population .

Even in the modern knowledge society , writing is still the most important cultural technique for passing on traditional knowledge and for creating new knowledge.

The process of manual writing has been increasingly replaced by typing since the advent of the typewriter and later the computer .

Writing as a mental process

Research into the writing process , for which Janet Emig laid the foundation in 1971 with her essay The Composing Process of Twelfth Graders, provides information about the complex interaction of different bodies of knowledge when writing . In the early 1980s, Linda Flower and John R. Hayes then published a model in which they represented writing as a cognitive process; the Flower / Hayes model of the writing process is still considered the standard model in writing studies and writing didactic contexts.

The inability to write (and read) is a fundamental obstacle to participation in the knowledge society. Those who cannot are called illiterate . Industrialized nations achieve a literacy rate of 95% and more. A lack of physical prerequisites for writing can be compensated for by technical aids such as dictation systems.

It is more difficult to compensate for psychological causes that make it difficult or impossible to learn to write, including spelling weakness ( dyslexia ) and agrafia . A partial or total inability to write is not necessarily associated with any other intellectual limitation of a person. In any case, significantly more people are not affected by inability to write , but rather by poorly trained writing skills , understood as the ability to independently write a written text and to take into account the reader's expectations of different types of text. A (interdisciplinary) writing pedagogy (see e.g. Bräuer 1998) and a writing didactics (cf. e.g. Fix 2008; Feilke / Pohl ed. 2014) have been researching acquisition processes and concepts since the 1980s developed for how such learners can deal with writing tasks in and outside of the educational institutions and how a more positive script-related self-concept can be conveyed in this context. The use of so-called style primers (e.g. Reiners 2001) is only useful to a limited extent, as their use requires well-developed writing skills.

Symptoms such as writer's block or muscular writer's cramp correspond to a temporary inability to write.

The professionalization of writing schools is gradually gaining ground in the field of academic writing . Where until the 1990s academic proseminars dealt exclusively with formal aspects of writing academic texts (correct citation , footnotes , bibliographies , propaedeutics, etc.), academic work is now also understood as a prose form that can be guided in different ways using creative methods . In addition to Otto Kruse , Lutz von Werder contributed to making it clear that scientific and creative work need and encourage one another.

Other forms of writing

Other writing styles are: