Excursions into the surrounding area were already part of the teaching program of the "elementary schools" in the 19th century.

As compulsory education refers to the legal obligation for children , after a certain age, for young people and adolescents up to a certain age, a school to attend. In the case of the underage of the school- age children, this must be implemented by the legal guardian .

Under Johann I, who converted to Calvinism , the Duchy of Palatinate-Zweibrücken was the first in the world to introduce compulsory schooling for girls and boys in 1592. In Norway , the primary school system was created by an ordinance of January 23, 1739, which, however, had to be modified two years later.

At the beginning of the 20th century, compulsory schooling laws were in force in Germany , Austria-Hungary and Scandinavia , France (since 1882). During the years of National Socialism, a compulsory education law was passed in 1938 . This contains the following formulation:

" § 12. Compulsory schooling. Children and young people who do not meet the obligation to attend elementary or vocational school are forcibly taken to school. The help of the police can be used here. " 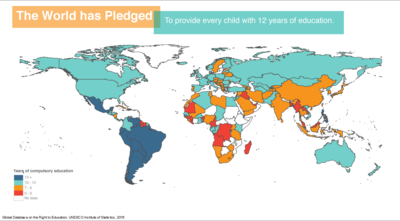 Beginning in the 16th century (Duchy of Pfalz-Zweibrücken 1592, Strasbourg 1598), compulsory education was introduced in the 17th century in Saxe-Gotha (1642), Braunschweig-Wolfenbüttel (1647) and Württemberg (1649). In the 18th century Prussia followed (1717), where until 1918 there was compulsory education, but no schooling. Saxony last introduced compulsory schooling in 1835, and in 1919 it was codified in the Weimar Constitution for all of Germany.

In the German education system , compulsory schooling is regulated in the individual state constitutions due to the cultural sovereignty of the states . Simple laws, the so-called school laws, regulate the implementation. The police are often used in this process.

In Austria's Compulsory Education Act 1985 , a compulsory education set. This begins on September 1st following the completion of the sixth year of life, lasts nine school years and applies to all children who stay in Austria permanently.

The obligation to teach can be fulfilled by attending a public school or school with public rights (the public school types that cover these nine years of compulsory schooling are called compulsory schools ) as well as by participating in an equivalent class (in private schools without public law, in home teaching or in a school located abroad). In Austria, a child can fulfill the obligation to attend school by attending home lessons, provided that this is equivalent to attending a school suitable for compulsory schooling (compulsory school). As with private schools without public rights, the prerequisite is the completion of an external exam at the end of each teaching year before a state commission, which has to check whether the curriculum has been fulfilled. For this reason, compulsory schooling in Austria - as in other countries that allow such opportunities - is also referred to as compulsory education or teaching .

The compulsory education was already generally introduced by Maria Theresa on December 6, 1774 for Austria and the countries under Habsburg rule by signing the "General School Regulations for the German Normal, Secondary and Trivial Schools in all of the Imperial Royal Hereditary Countries" (duration at that time: six years ). With the entry into force of the Reich Primary School Act in 1869, compulsory education was extended from six to eight years.

Since 2016, compulsory education has been followed by compulsory training . Young people who have fulfilled the general compulsory education must pursue an educational or training measure or a preparatory measure up to the age of 18. This is to guarantee that no more young people drop out of the education system at the age of 15 and pursue unskilled work or become unemployed. The training obligation can end prematurely if the young person completes at least a two-year BMS , an apprenticeship training, a health professional training of at least 2500 hours or a partial qualification after the teaching obligation . The compulsory training is suspended during military service, civil service or alternative service (also for women) and for those receiving childcare allowance .

In Switzerland, there is an eleven-year compulsory education, which consists of primary to sixth grade - including a two-year visit to a kindergarten or the first two years of an entry level - and the three or four-year (in Ticino) secondary level. For most children, compulsory education begins at the age of four. Except in two cantons, there is an obligation to provide education or instruction, which can be fulfilled through home tuition or unschooling (independent learning) instead of attending school . According to the interpretation, this also affects people without a regulated residence status (Sans-Papiers) .

Schooling and compulsory education in other countries

Poster of the Ministry of Education of East Timor : "Holidays are over - don't forget - children in school"

UNESCO collects and publishes data on compulsory education in all countries as part of its Education For All program .

Compulsory schooling has been criticized time and again in the course of its history. On the conservative-religious side, social interaction and individual lesson content (such as swimming lessons , religious instruction , physical education , sex education or scientifically controversial theories such as the theory of evolution ) are rejected. Compulsory schooling is rejected by libertarians and anarchists as an impermissible interference with the rights and freedoms of parents and children and criticized as an instrument of the rulers for indoctrination of people.

It is criticized that compulsory schooling dictates how an education should be, although school may not be optimally suited as a form of education for everyone.

Some educational researchers see compulsory schooling as counterproductive and criticize it as a cause for rejection of certain educational content and poor performance. The sociologist Ulrich Oevermann, for example, is in favor of abolishing compulsory schooling because it systematically prevents what it promises. He criticizes the " funnel pedagogy " and conceives a Socratic maeutic pedagogy of understanding.

The German brain researcher Gerald Hüther criticizes compulsory schooling for degrading children as self-determined subjects to incapacitated objects of schooling. In his opinion, the school should be a place that invites as many children as possible and motivates them to go there voluntarily and enthusiastically. It is an indictment of the current school system in Germany and "[...] the most terrible thing that can ever happen to you [...]" when you ask young people why they go to school and their only answer to it The question is "Because I have to".

The German philosopher and child rights activist Bertrand Stern sees it as a fundamental human right to be allowed to educate oneself freely, which is violated by compulsory schooling and criticizes in his books and publications the schooling ideology, which he calls "inhuman", "unconstitutional" and "obsolete" and "[...] no longer have any place in our reality". He thinks it is a scandal that decisions are made beyond the children about what is "best" for them from the point of view of others, and that they are thereby incapacitated and is of the opinion that a state that forces people to go to school, totalitarian and "[...] not worthy of a term such as democratic and free". He believes that the people should not be obliged to the state to attend school, but rather that the state should be obliged to the people to provide schools so that those people who want to attend school can do so. Furthermore, in his view, it is a crime against the German people that intelligent and creative people in Germany who are unable to attend school are “[...] either [abroad] [...]” or “[. ..] break here [in Germany] ”.

The German philosopher Richard David Precht considers it questionable to prescribe to children in a large part of their most formative and most important developmental phase how they should spend it and questions whether what is currently happening in schools and what the school is doing, a justification for this is to "wring off 10,000 hours [of] life" from children. He is of the opinion that schools are faced with completely different pressure to justify themselves than they used to be in times when information can be obtained quickly via the Internet. As the primary mediator of knowledge, the school has become dispensable, which is why, in his opinion, the school's learning objectives should redirect the focus from imparting knowledge to promoting the development of personality, teamwork, creativity, etc. He assumes that in the future more and more parents will ask themselves why they should send their children to school.

The American developmental psychologist Peter Gray describes the school with its compulsion to involuntary attendance as a prison .

In particular, the monopoly position of schools as the only possible form of education through compulsory education is repeatedly criticized, not least because some are of the opinion that certain teaching content is not imparted completely neutrally.

It has been criticized that compulsory schooling simply imputes an unwillingness to educate children and parents widespread educational incapacity.

Proponents of the abolition of compulsory schooling refer in particular to Article 26 (3) of the Universal Declaration of Human Rights , which stipulates: "Parents have a primary right to choose the type of education that their children should be given." on freedom of assembly .

In addition, the abolition of compulsory schooling would remove the school's monopoly on education and thus indirectly ensure that schools are forced in the long term to continuously improve their quality in order to remain attractive as a form of education.

Private or church-owned schools offer an alternative to public schools. Some of the private schools (independent schools) consciously rely on the application of alternative teaching principles, such as Waldorf or Montessori pedagogy . Most independent schools charge school fees to be paid by parents . In this way, the school-specific share of the educational offer that the state does not finance is carried.

In most of the countries outside of Germany there is compulsory education which, in addition to regular school attendance, also includes alternative forms of education such as B. home schooling ( homeschooling ) or independent lessons ( unschooling ) can be fulfilled and represents an alternative to compulsory schooling (see also: home schooling # country comparisons ). This approach is often understood as an ethical commitment on the part of parents and guardians.

Deschooling is one of the anti-school movements directed against compulsory schooling and comparable approaches .