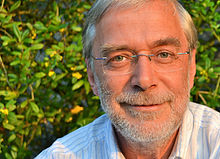 Gerald Hüther (born February 15, 1951 in Emleben ) is a German neurobiologist and author of popular science books and other publications.

Hüther studied biology at the University of Leipzig and received his doctorate there in 1976 while working as a scientific assistant at the University of Jena . At the end of the 1970s he fled the GDR : with the help of forged visa stamps in his passport, he traveled through several Eastern European countries to Yugoslavia and from there to the western part of Germany. From 1979 to 1989 he conducted research in Göttingen at the Max Planck Institute for Experimental Medicine in the field of brain development disorders. In 1988 he completed his habilitation in medicine at the Georg-August University in Göttingen and received a license to teach neurobiology . His cumulative habilitation thesis from 1987 is entitled Brain Development in Hyperphenylalaninaemia (Phenylketonuria) .

From 1990 to 1995 he was a fellow in the Heisenberg program of the DFG and worked in this context in the department for basic neurobiological research at the Psychiatric Clinic of the University Medical Center Göttingen . Hüther then worked as a research assistant at this clinic. In 2016 he finished his university career.

Hüther is a second married and has a son and two daughters.

Hüther worked and published in the field of experimental brain research until 2005. The focus of his scientific work was:

Gerald Hüther calls for a realignment of biology in the 21st century. Assumptions such as that of competition as the driving force behind evolution should be questioned. Breaking down organisms into their individual parts does not lead to an understanding of what life is. It is not enough to see living beings only as objects, but also as subjects with intentions and needs. It is important to put yourself in the shoes of living beings, to see that which connects all life. Common to all life is the ability to organize itself, autopoiesis .

Hüther is known to the public for lectures and interviews on brain research and its application to everyday life.

Hüther has been running the WIN-Future information network in collaboration with the educator Karl Gebauer since 2002 . He initiated the Göttingen Congress for Education , which has taken place annually since November 2000, and was chairman of the scientific advisory board of the Sinn Foundation until May 10, 2013, which, among other things, aims to develop alternative concepts for the treatment of attention deficit / hyperactivity disorder (ADHD ) to develop. In 2010, together with the Swiss social worker Tibor Beregszaszy, he initiated a project in which children with ADHD lived in seclusion on a mountain pasture for two months in order to get rid of the drug Ritalin . So far, no information or studies have been published that can prove the medium or long-term success of this completely drug-free approach.

In February 2013, the sect representative of the Archdiocese of Munich and Freising warned of Hüther and the Sinn Foundation “Development. Learn. Future ” with the note that their points of view are simplistic and would make generalities absolute. Furthermore, doubts about the alleged neuroscientific evidence are mentioned and, among other things, a critical examination of the philosophical requirements with regard to neuroscientific explanatory models of an alleged existence of God is required. As a consequence, the archdiocese forbids all institutions under its control to collaborate with the Sinn Foundation. In 2013, Hüther separated from the Sinn Foundation. Hüther commented on his resignation as follows: “On one of the Alm projects for ADHD children, a boy was sexually assaulted by a pedophile supervisor in 2010. [...] As President of the Sinn Foundation, I had to take responsibility for it. I did that as well as I could. But I don't want to get into such a situation again. ”The supervisor was the Swiss school social worker Tibor B.

Hüther is also a founding member of the following networks:

Hüther works as a scientific consultant for several companies, including

In a study, Hüther, as a member of a psychiatric study group at the University of Göttingen, investigated the effects of SSRIs and methylphenidate (Ritalin) on brain development on rats . In 2002 he expressed the fear that the use of methylphenidate in children with ADHD could trigger “movement disorders similar to those in Parkinson's disease ” as a long-term consequence . This hypothesis was rejected by research colleagues directly involved in the study, such as Aribert Rothenberger , and received with skepticism in 2002 at a congress of the German Society for Child and Adolescent Psychiatry and Psychotherapy . In 2006, the German Medical Association saw no support for Huether's fears in its guideline recommendations on ADHD based on evidence-based medicine .

A more recent work by Veit Rößner with the participation of international ADHD experts, such as Terje Sagvolden , Stephen Faraone and Aribert Rothenberger, was even able to demonstrate rather positive long-term changes due to the use of methylphenidate using an identical method on rats, which are considered model animals for ADHD.