This article describes the weekly magazine. Other meanings of the term focus can be found under focus (disambiguation) . 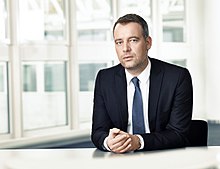 Robert Schneider , editor-in-chief of Focus since 2016

Focus ( own spelling in capital letters ) is a German-language news magazine and illustrated magazine from Hubert Burda Media . It was launched in 1993 as an alternative to Spiegel , and the editorial office has been based in the German capital Berlin since 2015 . Alongside Spiegel and Stern, Focus is one of the three German weekly magazines with the greatest reach. The concept comes from Hubert Burda and Helmut Markwort , who changed from editor-in-chief to editor-in-chief in 2009 and has been the founding editor-in-chief since 2017. Acting editor-in-chief of Focus has been Robert Schneider since March 2016 . The sold circulation is 255,262 copies, a decrease of 67.4 percent since 1998.

Work on the Focus began in the summer of 1991 under the code name "Zugmieze". In October 1992 Hubert Burda Media's plans for a new weekly news magazine became public. Observers initially gave the project little chance. Several attempts by other publishers to compete with the magazines Spiegel and Stern had previously failed. The first edition went on sale on January 18, 1993 and was sold out the next day. The subtitle of Focus was “the modern news magazine”. Helmut Markwort became the first editor-in-chief of the magazine . The cover story about the alleged comeback of Hans-Dietrich Genscher as the successor to Richard von Weizsäcker in the office of Federal President later turned out to be a duck . Positive and negative voices were balanced: Journalists tended to be critical of the Focus, while advertisers were consistently benevolent. Observers saw in Focus primarily an attack on the mirror, while the publisher used American magazines such as Newsweek or Time as a model.

After five issues, the Focus had around 15,000 subscribers, and with a circulation of over 300,000 copies sold, it was economically successful from the start. The magazine contributed significantly to the expansion of Hubert Burda Media's market position. In mid-1994 a Dutch court ruled that the Focus could no longer be sold in Belgium , the Netherlands and Luxembourg due to trademark disputes . Regardless of this, the Focus continued on its course, the magazine at times even marketed more advertisements than the Spiegel. Burda promoted internationalization, for example, through a cooperation with the US media company Ziff Davis . The Internet portal Focus Online was launched in 1996, and the production of TV content began under the name Focus TV . The Focus developed into one of the most important German news magazines. In 1997 his publisher Hubert Burda received awards for the paper's “creative and groundbreaking innovations”.

In the first five years of its existence, the Focus repeatedly caused a stir through interviews with important personalities, for example in 1996 with the building contractor Jürgen Schneider after his arrest or in 1997 with Leo Kirch after the collapse of his media group. The Focus concept was also implemented outside of Europe, for example in the form of the Época magazine from the Brazilian media company Grupo Globo . At the beginning of 1999, Focus reached more readers than Spiegel for the first time, and in the following years it was able to expand its lead. In 2000, an offshoot of the news magazine for economic and financial topics was launched under the name Focus Money . In 2001 a department for Internet topics was created in Focus, and the Internet activities of Focus Digital were brought into the joint venture Tomorrow Focus . Focus Magazin Verlag was again primarily responsible for printed publications, but was involved in Tomorrow Focus.

2004 saw the first personnel changes at Focus: In addition to his work as editor-in-chief, Helmut Markwort also took on the position of publisher. Uli Baur has been promoted from deputy editor-in-chief to editor-in-chief. Under the new management, Focus 2005 and Hörverlag launched the Claudio download portal for audio books . In 2006 the Focus got caught in the journalists' scandal of the Federal Intelligence Service . At the time, several journalists had offered the secret service to collect and pass on information about investigative journalists and their sources in return for cash and non-cash benefits. The secret service again had Focus journalists monitored as informants. Regardless of the public debate about the affair, the Focus continued its development, but like all news magazines had to contend with a falling circulation. At the end of 2009 it was announced that Helmut Markwort would retire as editor-in-chief. Wolfram Weimer , founder of the political magazine Cicero , was appointed his successor . Observers classified the replacement of Markwort as a fundamental "change of direction". Before Weimer took office, the publisher carried out a relaunch of the Focus.

Weimer left Focus again after only one year. His position was not filled again; Baur became the sole editor-in-chief. According to media reports, editors Markwort and Baur had "rejected the new course of the Focus and recently increasingly hindered it". Weimer wanted to position the magazine “more demanding and more political”. The sold circulation of individual issues fell under the leadership of Weimer and Baur “more and more often” below the 100,000 mark. In 2013 Jörg Quoos took over the editor-in-chief of the magazine, Baur became editor. Quoos oriented the focus more politically and in particular reduced the proportion of advice topics. For example, the magazine published Uli Hoeneß's self-disclosure for tax evasion and uncovered the so-called “Nazi treasure” of the art collector Cornelius Gurlitt . In 2014, Ulrich Reitz followed as the new editor-in-chief, as the publisher and Quoos were at odds about the future direction of the magazine. Among other things, he completed the move of Focus from Munich to Berlin, initiated by Quoos, in 2015. Only a small part of the editorial team remained in the Bavarian capital. In 2016 there was another change at the top of the editorial board: Robert Schneider , previously editor-in-chief of Superillu , replaced Reitz, who was responsible for politics and debate until the end of the year.

In 2017, Focus announced the closure of its offices in Munich and Düsseldorf, and the structure of the editorial team was modernized. Since then, the magazine has been created entirely in Berlin. In the further course of the year, Hubert Burda Media started a broad reader campaign entitled “People in Focus”. On January 13, 2018, the anniversary edition "25 Years of Focus" was published with a cover by Ai Weiwei .

The Focus is one of the largest-circulation German news magazines and has a disproportionately large share of the advertising market (as of 2005). However, like its main competitors Spiegel and Stern , the magazine has lost a lot of circulation in recent years . The number of copies sold has fallen by 67.4 percent since 1998. It is currently 255,262 copies. This corresponds to a decrease of 527,423 units. Depending on the title topic, retail sales fluctuate relatively strongly. The share of subscriptions in the circulation sold is 69.1 percent.

The Focus positioned itself as a news magazine next to the mirror. This, in turn, decidedly differentiated itself from the Focus at that time and sometimes disparagingly referred to it as “Münchner Illustrierte”. Both publications differ in their editorial concepts: Der Spiegel focuses on complex political, economic and social analyzes, while Focus, in addition to its political reporting, also covers everyday topics from the areas of family, health, finance and career. However, the Spiegel recently published more utility titles based on the Focus model. Readers are offered information with comparatively shorter texts, lots of graphics, a strong visual language and ranking lists that are quicker to understand. Advice journalism has always been an essential element of Focus. According to their own statement, the target group of the news magazine are people who are “characterized by an active information behavior and in particular by their information intensity in society, in politics and at work”. At the start of the magazine, observers referred to this as the “info elite”. The focus is generally on the bourgeois political spectrum .

A report by Focus about the GSG-9 operation in Bad Kleinen , which in January 1994 led to a search of the offices, attracted more attention . The judiciary investigated the magazine because it had been quoted from confidential sources, such as an evaluation report by the Federal Criminal Police Office and the pocket calendar of the RAF terrorist Wolfgang Grams, who was killed by suicide . According to the Spiegel, the documents found at Focus provided the decisive clue for identifying the informant.

In 1995 the Focus reported on the economic difficulties of the Hamburg private bank Mody. As a result, many customers withdrew their deposits, and one day after the magazine appeared, the bank had to temporarily close. The shareholders made the Focus directly responsible for the insolvency . The press chamber of the Hamburg Regional Court followed their argument and sentenced Focus to compensation. This decision was overturned by the Hanseatic Higher Regional Court in Hamburg on appeal, and the Federal Court of Justice rejected the plaintiffs' appeal. The Focus welcomed the conclusion of the legal disputes as a "victory for freedom of the press".

In a 2014 study by the Technical University of Dresden , the synchronization of news and advertising was examined. The result was that companies were reported more frequently, friendlier and with more product mentions, both in Spiegel and in Focus, the more advertisements these companies placed.

In 2016, the Focus coverage of the sexual assault on New Year's Eve 2015/16 caused a sensation. The title page showed handprints in black paint on a naked white woman, it was partially criticized as a “naked insult” and classified as “racist”. In contrast to the Süddeutsche Zeitung , which had also polarized with a representation, the Focus declined an apology and justified the cover as a symbolic representation of “what happened in Cologne”. The German Press Council received numerous complaints about the Focus, but rejected all of them. The press council decided otherwise for the Focus Money offshoot .