Logo of the German Press Council

The two main organs of the press council are the sponsoring association and the plenum.

The German Press Council has drawn up its journalistic principles as a “press code ”, a kind of code of honor for media representatives that was first published in 1973 and last revised on March 22, 2017 (Section 12.1 - Discrimination). On December 12, 1973, it was presented to Federal President Gustav Heinemann. It is part of the tradition of the press code that every change is passed on to the incumbent Federal President.

If a press company allegedly violates one or more of these journalistic principles in print or online media, anyone can submit a complaint to the press council. This has also been possible online since 2009. In its meetings, the committee decides whether the complaint is well founded. It then has the option of taking the following measures:

Note
sent to the relevant editorial team in the event of minor violations of the code, non-public
disapproval
issued for more serious violations of the code, non-public. According to Section 15 of the Complaints Regulations, there is no obligation to print disapproval in the relevant publications. However, as an expression of fair reporting, the Appeals Committee recommends such an editorial decision.
Reprimand
toughest sanction: the medium is asked to print a "public reprimand". Non-public complaints are issued in the event of serious violations if further publication is prohibited for reasons of victim protection.

The highest number of complaints about a single incident was received in 2015 with around 430 about reports following the accident on Germanwings flight 9525 . After the accident at the Love Parade in 2010 , there were 241 complaints.

When deciding which pictures may be shown, the press council weighs up the readers' interest in information on the one hand and the violation of the protection of minors, human dignity and the protection of individual privacy on the other . When asked whether pictures of the killed Libyan head of state Muammar al-Gaddafi may be shown, he decided that showing such pictures does not automatically violate the principle of human dignity according to Section 1 of the Code. The complaints committee rejected the majority of the complaints as unfounded, as the pictures were "documents of contemporary history". Only two special cases with inappropriate enlargement or special placement on the front page were disapproved.

The political goal of the German Press Council is to prevent the printed media from being monitored by state supervisory bodies through voluntary self-regulation. The Managing Director of the Press Council, Lutz Tillmanns, formulates this principle as follows:

"How successful the Press Council is can also be seen in the reluctance of the legislature to pass laws that define the limits of journalistic work."

- Lutz Tillmanns, Managing Director of the Press Council, quoted from

In 1952, the Federal Minister of the Interior, Robert Lehr, presented a draft law for a federal press law, which provided for the establishment of "state press committees". The draft law was Lehrs' means of political pressure to convince publishers and journalists that self-regulation by the German press was necessary for “internal cleanliness” (Lehr). Since state control was unacceptable for journalists and publishers, the German Press Council was founded on November 20, 1956, following the example of the British "Press Council". Ten publishers and journalists were involved in the organization when it was founded.

In 1958, the press council took action against a draft of an amendment to the penal code that provided for imprisonment for someone who publicly disparages the private life of a foreign head of state and thus disrupts international relations with the Federal Republic of Germany ( Lex Soraya ). The background to the planned novella was the depiction of the divorce of Princess Soraya from Shah Mohammad Reza Pahlavi , which was reported in detail in the German tabloids in the spring of 1958 . The bill was not passed.

In the 1960s and 1970s, the press council pushed for the unification of state press laws. After the Spiegel affair , the press council achieved a reform of the penal code in which the flexible criminal offense of treason was specified. In the discussion about the German emergency laws in 1968, he turned away restrictions on freedom of the press. The German Press Council intervened in the discussion about media concentration by contributing factual information. Since 1976 the Federal Republic has been paying regular subsidies to the Press Council.

In 1986 a sponsoring association for the press council was founded.

Since the German Press Council opposes data retention , it is a co-signatory of the joint declaration of the AK reserve on the corresponding draft law.

The nationwide press pass , which was reintroduced in 2018 , is being overseen by the German Press Council. The ID card bears the signature of the chairman of the conference of interior ministers. A “standing commission” with equal representation and set up at the German Press Council, with two members each appointed by the Press Council and the Conference of Interior Ministers, examines on the basis of an agreement which associations meet the requirements for issuing the national press card. The Federal Association of Digital Publishers and Newspaper Publishers (BDZV), the Association of German Magazine Publishers (VDZ), the German Association of Journalists (DJV), the German Union of Journalists in ver.di (dju) and the Freelens Photographers Association and the Association are currently authorized to issue German sports journalist (VDS). 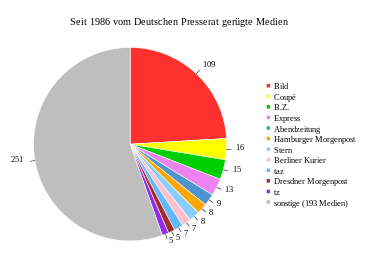 Media criticized by the FREP for the form of reporting since 1986; As of July 2008

When Günter Wallraff discovered controversial working methods of the Bildzeitung in 1977 , the press council reprimanded the newspaper a total of six times. Wallraff himself was reprimanded because undercover investigations violated the press code. The debate about how to deal with Wallraff's research and its results led to a strong division between representatives of publishers and journalists in the press council. When the Express refused to print a reprimand in 1981 , the press council ceased its work until the publishers made a voluntary commitment to reprint the reprimands in 1985.

The media and the complainants assess the effectiveness of the measures taken by the German Press Council differently, since the sanctions have hardly any consequences for the newspaper. Critics therefore refer to the press council as a “toothless tiger” that only has an alibi function.

The press council has been considering a modernization for a long time, because until now the press council has been limited to print media and print media with an online presence. Considerations include a special online code , the regulation of the formats set by users such as blogs, videos and podcasts. This would be the first time bloggers have been recognized as journalistic providers in Germany.

A comparable institution that deals with the assessment of advertising is the German Advertising Council .