The Spiegel affair in 1962 was a political affair in the Federal Republic of Germany in which employees of the news magazine Der Spiegel found themselves exposed to criminal prosecution for alleged treason due to a critical article . It was the first event in post-war history on which the West German public took a spontaneous and committed political stance because it saw it as an attempt to silence an unpopular publication.

The outcome of the affair, in the course of which two state secretaries were dismissed and the then Federal Defense Minister Franz Josef Strauss had to leave the Adenauer cabinet , is now seen as strengthening the freedom of the press in Germany. 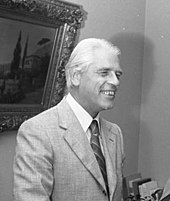 An article on the results of the NATO maneuver Fallex 62 , written by Conrad Ahlers and the Bonn-based Spiegel editor Hans Schmelz , appeared in the Spiegel issue 41/1962 of October 10, under the title Conditionally ready for defense . This was based on the assumption that World War III would begin with a major Soviet attack on Western Europe. The article questions the concept of a nuclear first strike ("pre-emptive strike") and the corresponding armaments policy under Federal Defense Minister Franz Josef Strauss : The Bundeswehr, because of its inadequate equipment, is compared to that of NATO since the inauguration of US President John F. Kennedy in 1961 was unable to prefer conventional forward defense against Warsaw Pact troops . An effective deterrent remains questionable.

The information that led to the article was made available to Spiegel by the head of the command department in the command staff of the Army , Colonel Alfred Martin .

Federal Prosecutor Albin Kuhn suspected treason on October 10, 1962 and asked the Ministry of Defense for an opinion. The Würzburg constitutional lawyer and then Colonel of the Reserve, Friedrich August Freiherr von der Heydte , filed a complaint against the editorial staff of Spiegel on October 11th for treason . After the Federal Prosecutor had obtained an opinion from the Federal Ministry of Defense - Siegfried Buback was in charge of the investigation - the investigating judge at the Federal Court of Justice issued the requested arrest warrants and search orders on October 23 . The arrest warrants concerned several Spiegel editors, including Conrad Ahlers, Claus Jacobi and Johannes K. Engel , as well as the publisher and editor-in-chief Rudolf Augstein .

On the evening of October 26th, a Friday, the police began to occupy and search the Spiegel rooms in the Hamburg press building , and later also the editorial office in what was then the federal capital of Bonn. On the instructions of editor-in-chief Claus Jacobi, the then head of service, Johannes Matthiesen, took over an editorial team that was supposed to continue working on the current issue of Spiegel No. 44. In the end, according to the orders of the First Public Prosecutor Buback, Matthiesen released “the proofs in full with an objection” late in the evening .

The then Hamburg Interior Senator Helmut Schmidt was informed around 8:30 p.m. that an action against the mirror had started. Schmidt immediately put forward "serious political concerns" and saw in this action "an extraordinary burden on the debates about the emergency legislation "; nevertheless he instructed the Hamburg detective director Erhard Land to grant the administrative assistance requested by the Federal Ministry of the Interior.

That night Conrad Ahlers, who was on vacation with his wife in Torremolinos, was arrested by the Spanish police ; The fact that Strauss had initiated this through the Madrid military attaché Achim Oster in Spain, ruled by dictator Franco , aroused particular indignation among the opposition. Two days later, on Sunday, October 28, Rudolf Augstein turned to the police and was in custody taken.

Demonstration of Freiburg students on November 16

These police measures led to protests in sections of the population, especially among students , as well as in the rest of the press , which criticized them as an attack on freedom of the press. Since the search of the Spiegel editorial offices lasted from October 26, 1962 to November 25, 1962, in addition to the Zeit , Stern and Morgenpost also housed in the Hamburg press building , the Springer press also enabled the Spiegel editors to use rooms and resources, see above that the magazine could continue to appear.

During a tumultuous question time in the Bundestag on November 7, 1962, Chancellor Adenauer ( CDU ) defended the measures with the words "We have" (continued heckling from the SPD) "an abyss of treason in the country" (MP Seuffert : "Who says that ?") "I say this."

Parts of the public saw the action as an attack on freedom of the press and reacted with a multitude of resolutions, petitions, demonstrations and editorials . In some cases, events in German history were remembered that were viewed as equally serious. Parallels to the Weltbühne trial have been drawn by the press and well-known lawyers . For example, the BGH Senate President Heinrich Jagusch published the widely acclaimed article Does a new Ossietzky case threaten ? The memory of the Weltbühne trial increased the protests against the cooperation between the government and the judiciary against the mirror .

In the course of November, the Spiegel affair turned into a government crisis within the Adenauer cabinet . Defense Minister Strauss ( CSU ) had initially assured that he had nothing to do with the whole action, but in the course of time came increasingly suspected of having been informed in detail about the actions and of having promoted them himself. The FDP was angry that Justice Minister Wolfgang Stammberger (FDP) had not been informed in the run-up to the action - Strauss was also responsible for this: he had forbidden the State Secretary in the Justice Ministry, Walter Strauss , to inform Stammberger. On November 19, all five FDP ministers announced their resignation in protest against Defense Minister Strauss. On November 30, the latter finally announced his resignation from the office of Defense Minister, whereupon the fifth - and last - Adenauer government was formed on December 14, 1962 , which only lasted until October 11, 1963.

The arrested Spiegel editors were gradually released from pretrial detention - Hans Schmelz, who had done most of the research, after 81 days; finally also Rudolf Augstein after 103 days on February 7th. In January 1963, in the wake of the events, the Federal Prosecutor's Office also investigated Helmut Schmidt, the then Hamburg Interior Senator, for aiding and abetting treason. The background to this was that in the autumn of 1962 Schmidt complied with the request of his college friend Conrad Ahlers to review excerpts from the article "Conditionally ready for defense", which was about to be published, for legal obstacles to publication. This procedure was only discontinued in early 1965.

On May 13, 1965, the 3rd Criminal Division of the Federal Court of Justice ruled that there was no evidence to prove that Conrad Ahlers and Rudolf Augstein had knowingly betrayed state secrets. Rather, most of the military-strategic and weapons-related details mentioned in the article had already been published in other media, including an open report by the Defense Committee of the Bundestag and in the Frankfurter Allgemeine Zeitung . They corresponded to "the state of public information at that time" and did not represent any gain in knowledge for opposing secret services. Thus, the opening of main proceedings against Ahlers and Augstein was rejected. Disciplinary proceedings against Colonel Martin have been dropped. Martin was retired on April 1, 1969 at the age of 54.

In 2012 it became known that the BND had spied on and tried to manipulate the editorial team for years. Even fifty years after the affair, the investigative editors of the Spiegel were refused access to the files from that time.

ARD had the affair filmed for television under the title The Spiegel Affair . The shooting took place in April and May 2013 a. a. in Berlin and Hamburg. Directed by Roland Suso Richter , the film was produced by Sperl Film and Wiedemann & Berg Television for BR , WDR and ARD Degeto . The first broadcast took place on May 2, 2014 on ARTE and on May 7, 2014 on Das Erste . Franziska Augstein , the publisher's daughter, criticized the film as flawed and heavily falsified in an article for the Süddeutsche Zeitung .