Josef Kammhuber (born August 19, 1896 in Burgkirchen am Wald , now Tüßling ; † January 25, 1986 in Munich ) was the first general of the night fighter in the German Air Force in World War II . He built the first successful defense system against night air raids on the German Reich , the so-called " Kammhuber Line ". Kammhuber was also commodore of Kampfgeschwader 51 , which mistakenly bombed Freiburg im Breisgau on May 10, 1940, killing 57 residents.

British secret services managed to get detailed information about the Kammhuber Line. Thanks to this, the Royal Air Force (RAF) was able to neutralize the system. Quarrels between Kammhuber and the Inspector General of the Air Force Erhard Milch finally led to his replacement in 1943. Only shortly before the end of the war was Kammhuber given new tasks in February 1945, but at this stage of the war could no longer achieve anything.

Kammhuber occurred after the war in the newly established Air Force of the Armed Forces one, reached there from 1957 to 1962 was the first to service position Inspector of the Air Force and the only one inspector from the armed force to the rank of general .

Josef Kammhuber was born in Upper Bavaria as the son of a farmer. At the beginning of the First World War , the 18-year-old high school student joined the 3rd Bavarian Pioneer Battalion. He joined the infantry in 1915 and was promoted to lieutenant in 1917. The Reichswehr took Kammhuber after the war, his transfer to Munich took place in 1923. He refused as other officers of his regiment, against the Hitler coup disengage because Ludendorff mitmarschierte.

On April 1, 1925, he was promoted to first lieutenant . 1928-1930 he participated in the USSR at the secret training pilots in part and in 1931 for Captain transported. It was then used in the Reichswehr until 1933 and, with short interruptions, in the Reich Aviation Ministry from 1933 to 1939 . He was on the staff of General Walther Wever , who was busy building a strategic bomber command . This project was abandoned after Wever's death in June 1936. Kammhuber's promotion to colonel took place in early 1939.

After the Reich government realized that the Royal Air Force had embarked on a massive aircraft construction program , Hitler demanded that a construction program be carried out with a budget of 60 billion Reichsmarks . The German aircraft industry, however, was unable to carry out such an upgrade due to a lack of means of production and raw materials, which was finally recognized by the air force command. The chiefs of staff Hans Jeschonnek , Werner Stumpff and Kammhuber therefore pursued Kammhuber's own program with a budget of 20 billion Reichsmarks, which was assumed to be feasible. State Secretary Milch arranged a meeting between the Chiefs of Staff and Hermann Göring , the Commander in Chief of the Air Force . At this meeting, Goering demanded that Hitler's program should be implemented “somehow” as planned.

In February 1939, Kammhuber asked to return to active service. In the course of the general mobilization he became Chief of Staff of Air Fleet 2 in August 1939 under the command of General Hellmuth Felmy . In March 1940 he became a commodore of the Kampfgeschwader (KG) 51 ("Edelweißgeschwader"). During this time, on May 10, 1940, the squadron mistakenly bombed Freiburg im Breisgau , killing 57 residents. Against his better judgment, Kammhuber denied the participation of his unit at the time in 1954.

During the western campaign he was shot down near Paris on June 3, 1940 and was taken prisoner by the French. Freed again after four weeks, he returned to Germany to the Air Force High Command .

In July 1940 he was appointed commander of the 1st Night Fighting Division and assigned to take over joint command of the searchlight batteries, the flak and radar units . Up until that time, all of these units were under separate command. There was no common reporting chain; an exchange of experiences between the units was not regulated. Kammhuber had thus become the coordinator of the entire German air defense. On October 1, 1940, he was promoted to major general and awarded the Knight's Cross of the Iron Cross on April 9, 1941 .

His appointment as general of the night hunting and commanding general of the XII. Fliegerkorps took place in August 1941. All units of the German night air defense were subordinate to it. He moved to his headquarters in Zeist near Utrecht in the Netherlands . 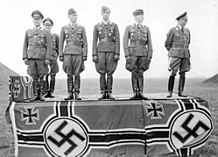 Kammhuber (1st from left) as commanding general of the night hunt, 1942

He organized the night fight in the form of a chain of radar stations with overlapping surveillance zones, known as the Kammhuber Line (also known as the Kammhuber Riegel). This line stretched from Denmark to central France. Each surveillance zone, called the four-poster bed , was approximately 32 km long in a north-south direction and 20 km wide in an east-west direction. The radar stations were initially equipped with a Freya early warning radar device. Searchlights were set up in each four-poster zone and two night fighter planes were stationed. When the radar detected an enemy aircraft, a searchlight coupled to the radar was directed at the target. Hand-operated searchlights followed and night fighters mounted to intercept the now-lit target. The four-poster beds were also equipped with two Würzburg radars each . Unlike the Freyas, these devices could also take an altitude bearing. A Würzburg radar device was fixed on a German fighter pilot as soon as he entered the four-poster zone. After the Freya device had registered an invading enemy bomber, this was pursued by the second Würzburg. This enabled the crew of the radar station to continuously obtain the position of both aircraft and thus guide the fighter to his target. As a trial, individual night fighters were equipped with devices called tensioners to detect heat radiation from the enemy aircraft engines. In practice, however, these proved to be largely useless.

Kammhuber also initiated the establishment of a so-called long-distance night hunting group, the II./NJG 1, later renamed I./NJG 2. He realized that the most effective combat against enemy bombers could take place during take-off and landing. School operations could also be disrupted. Because of his justification "You have to grab the enemy by the roots" he was nicknamed Wurzelsepp by the night hunters.

German radio operators listened to the radio frequencies of the British bombers and were able to determine the beginning of a wave of attacks. The operations began in mid-July 1940 from Düsseldorf, later the operations from Schiphol followed . Despite the successes, Hitler ordered the cessation of operations and the relocation of the squadron to the Mediterranean on October 13, 1941.

The British Enlightenment quickly recognized the function of the Kammhuber Line and looked for ways to overcome it. In addition, the educational work of the British secret services did valuable work. At the time, the British Bomber Command sent planes one at a time to the target area in order to spread the defense forces as far apart as possible, which meant that each plane attracted little concentrated anti-aircraft defense.

However, this also meant that each of the four-poster radar stations were only busy with one or two aircraft at a time, which made their job much easier. At the urging of British intelligence scientist Reginald Victor Jones , the British bomber command changed its tactics and sent all bombers at the same time in the form of a single stream of bombers against a target, carefully making sure that they flew right through the center of a four-poster bed. Now there were hundreds of bombers facing a radar station, which could only be countered with a few combat aircraft. This tactic was so successful that the shooting rate of night fighters went to zero. The Allies achieved an additional, massive obstruction of the German radar by the fact that their aircraft dropped masses of thin aluminum strips (chaffs, code name window) in an attack wave . The radar echoes of the slowly falling metal strips made it impossible to identify the bombers on the radar screen. As a result of these failures, Kammhuber was targeted by Milch and Göring, who spoke of “lazy magic” and “irresponsible rhetoric and fantasies of flimsy defeatists”.

Kammhuber looked for solutions, and the result was the two-part concept of the " Wild Pig " and the " Tame Pig ". The Jagdgeschwader 300 called "Wilde Sau" , set up according to a proposal by Hans-Joachim Herrmann , consisted of day fighters who, in the light of flares, searchlights or fires on the ground, headed for enemy bombers and attacked within sight. The "Wilde Sau" achieved its greatest success during Operation Hydra , the bombing of the Peenemünde Army Research Center on 17/18. August 1943. De Havilland DH98 Mosquito bombers had dropped target marker flares over Berlin . Most of the regular night fighters were sent to meet them. However, it turned out that they were too far away and too slow to intercept the mosquitos. The hunters of the "Wild Pig", however, with their much faster Focke-Wulf Fw 190, were able to intercept the enemy aircraft. About 30 fighters broke into the enemy formation and shot down 29 of the 40 British bombers. However, the "Wilde Sau" attacking on sight was heavily dependent on the weather, so that her successes were limited.

The "Tame Sau" were night hunters who were equipped with radar. They gathered in the air after the penetration of enemy aircraft and searched for their targets with the help of the on-board radar, often over several hundred kilometers. In addition, they were supported from the ground by radio operators from the radar stations of the Kammhuber Line, who relayed bearings from enemy bombers. The greatest success of the "Zahmen Sau" was during the air raid on Nuremberg on March 31, 1944, in which 95 four-engine bombers were shot down.

Further activity until the end of the war

At the same time, Kammhuber is increasingly committed to the construction of a specially developed night fighter. He finally decided on the Heinkel He 219 "Uhu" after witnessing a demonstration of its capabilities in 1942. However, Milch decided against it and there was a dispute between Kammhuber and Milch. As a result, Kammhuber was deported to Air Fleet 5 in Norway in November 1943 , as the commander of a small number of obsolete aircraft. In February 1945 Hitler ordered Kammhuber back to Germany and appointed him "Special Representative for Combating Four-Engine Enemy Aircraft". In view of the military situation of the German Reich at the time, this position was more of a theoretical nature.

After the unconditional surrender, Kammhuber and his staff fell into American captivity, from which he was released in 1948. He started a career as a wine sales representative. In 1952 he became an employee of the US Army Historical Division . On June 6, 1956, he took over the position of Lieutenant General as head of the Air Force Department of the Federal Ministry of Defense . A short time later he became inspector of the Air Force , an office which he held until his retirement on September 30, 1962.

As the only inspector of a branch of the armed forces, he was promoted to general in May 1961 . He had a close friendship with the Federal Minister of Defense, Franz Josef Strauss . The procurement of the Lockheed F-104 by the German Armed Forces, which became known as the Starfighter Affair , was based on Kammhuber's ideas. The formation of the new Air Force was based on the US Air Force. It comprised the main tasks of air defense and air strikes, including support for land war operations and participation in deterrence with nuclear weapons. The Luftwaffe played a central role in the strategy of massive retaliation that was in effect until 1967/68 .

In July 1960 he gave the eulogy for Albert Kesselring .

Josef Kammhuber died on January 25, 1986 at the age of 89 in Munich. He is buried in the forest cemetery there . The Kammhuber barracks in Karlsruhe was named after him. In July 2011, the Federal Constitutional Court moved into the barracks that had been abandoned by the Bundeswehr, which then lost its name, while its headquarters were renovated from 2011 to 2014.