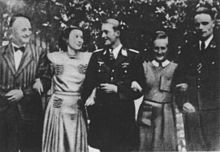 Johannes Steinhoff (born September 15, 1913 in Bottendorf , Querfurt district ; † February 21, 1994 in Wachtberg-Pech ) was a German officer in the Wehrmacht and Bundeswehr , most recently in the rank of General in the Air Force. In World War II he served as a fighter pilot, u. a. he was a highly decorated commodore of Jagdgeschwader 77 and jet fighter squadron JG 7 . As an officer of the Hunting Association 44he suffered a start-up accident in April 1945 and suffered burns on his face, which caused significant scars. From 1966 to 1970 he was Inspector of the Air Force and from 1971 to 1974 Chairman of the NATO Military Committee .

As the son of a mill owner and grain merchant, Steinhoff completed his Abitur at the Roßleben monastery school and then studied philology at the University of Jena . In Jena he became a member of the academic country team Suevia (today academic country team Saxo-Suevia Erlangen ). After he had to give up his studies for financial reasons, he joined the Navy and was trained as a sea pilot for a year . After 1936 the newly established Air Force had changed, he was in 1938 as a first lieutenant squadron commander in the first season of the Lehrgeschwader 1 (1./LG 1). In 1939 he switched to the 11./LG 2 as a squadron captain , which specialized in night hunting. As a squadron captain of 10./JG 26 he flew on December 18, 1939 in an aerial battle over the German Bight . He experienced both the western campaign in 1940 and the Battle of Britain as a squadron captain of the 10./JG 2 . In 1942 he was in the war against the Soviet Union as a captain group commander of the II. Group of Fighter Squadron 52 (II./JG 52). Then he was deployed in 1943 - as commodore of Jagdgeschwader 77 "Herz As" - in southern Italy in Operation Husky and towards the end of the war in the "Reich Defense" against the Allied bombing raids . From October 1944, he was retrained to the Messerschmitt Me 262 jet fighter (presumably in the Rechlin test center ), and converted the 7th Fighter Wing in Brandenburg to this aircraft.

Most recently he was in the rank of colonel simple fighter pilot and "Einsatzstabsoffizier" (a comparatively current term for his occupation at the time) in Jagdverband 44 , an improvised squadron with numerous highly decorated pilots under the leadership of Lieutenant General Adolf Galland . During the war he flew over 900 sorties and was involved in dogfights in over 200 of them. He got 176 kills, making him 22nd among the fighter pilots of all nations involved in World War II; he himself was shot down around a dozen times. During a start on April 18, 1945 in Munich-Riem , he had an accident with his Me 262 and was seriously wounded ; Burn scars on his face marked him for the rest of his life. Steinhoff was the bearer of the Knight's Cross of the Iron Cross with Oak Leaves and Swords .

He took part in the “ mutiny of the fighter pilots ”, in which some fighter pilots wanted to depose the Commander in Chief of the Air Force Hermann Göring . Together with Adolf Galland and other aviators such as Günther Lützow and Johannes Trautloft , he wanted to get Göring to be replaced by Robert Ritter von Greim , but this failed due to a lack of determination and the lack of support in the Air Force. As a result, Steinhoff, along with Günther Lützow, was relieved of his post and a little later assigned to Jagdverband 44 as a flight instructor.

There are different evaluations of Steinhoff's role in this “conspiracy”. Wolfgang Falck , at that time First General Staff Officer (Ia) in the Reich Defense, takes the view that Steinhoff's role was less important than he himself claimed in his book Conspiracy of Fighter Pilots. Kurt Braatz outlines this situation in the biography of Günther Lützow (1912–1945) that Lützow and Trautloft alone dared to stand against Göring. Even Galland had given up the resistance because he no longer had any support from Goering. The failure of this "revolt" must be seen against the background of the complete loss of confidence in the fighter pilots who were given all the privileges at the beginning of the war. Due to the quantitative and qualitative superiority of the Allied air forces, they had not been able to do anything against the Allied bombing attacks and therefore lost all credit to the leadership of the “Third Reich”. At the same time, the fighter pilots lost the power struggle within the Air Force to use the Me 262 as a fighter or lightning bomber. It was only later that the fighter pilots were able to win over others to use the Me 262 as hunters.

Between 1945 and 1947, Steinhoff was under constant medical treatment. After he was released from the hospitals, he learned to paint a ceramic in a majolica . In 1950 he joined the Gabler advertising agency in Munich, which he left again in June 1952 to work as an expert on issues relating to aerial warfare in the Blank office. He also took part as a consultant in the negotiations on the European Defense Community in Paris.

On November 1, 1955, Steinhoff joined the German Armed Forces as an "aptitude trainee" . He then took part in a retraining for US jet fighter aircraft in the United States until March 1956 , before being appointed a professional soldier on March 1, 1956 . As early as 1954, he was one of the main people responsible for building up the Bundeswehr's air force . After his return from the USA, Steinhoff took over the planning subdivision in Department VI in the Federal Ministry of Defense in Bonn as Brigadier General , from which the Luftwaffe (Fü L) command staff emerged in 1957 . In the course of this reclassification, he was also Deputy Chief of Staff of the Air Force as Head of Staff Department III in Fü L. After a preparatory period, he served from September 1, 1960 as German Military Representative (DMV) at the NATO Military Committee in Washington DC, and from 1962 as Major General . During this time he experienced the beginnings of NATO's strategy change from the MC 14/2 " Massive Retaliation " to the MC 14/3 " Flexible Response ".

From October 1, 1963, he was in command of the 4th Air Force Division in Aurich , which he handed over to his successor Brigadier General Dietrich Hrabak on April 14, 1965 . In 1965 he was employed as Chief of Staff and Deputy Commander-in-Chief of the Allied Air Forces Central Europe (English. Allied Air Forces Central Europe = AAFCE, in colloquial AIRCENT) in the rank of Lieutenant General . On September 2, 1966, at the height of the “ Starfighter Crisis ” , Steinhoff became the Air Force inspector .

At the beginning of his term of office he had gained the competencies that he considered necessary to resolve the crisis in a tough dispute with the political leadership of the Federal Ministry of Defense (BMVg). The conflict between the Luftwaffe leadership and the political leadership in the Federal Ministry of Defense intensified against the background of the crisis surrounding the demarcation between political leadership and military leadership, which Minister Kai-Uwe von Hassel and his representative, State Secretary Karl Gumbel , under close observation by the Mass media had to lead. Federal Defense Minister Kai-Uwe von Hassel increasingly lacked political support in the federal government due to the amateurish behavior of his ministry in the Starfighter crisis. In addition, there were sharp attacks by the opposition in the Bundestag as well as media coverage that called for a change in methods and management staff. This made it easier for Steinhoff to enforce those powers that were necessary for the operation of the F-104G Starfighter weapon system . When in the meantime there was resistance to his demands in the ministry, he threatened Minister von Hassel at least twice with immediate resignation, whereupon the latter gave in to Steinhoff's demands. This was also presented extensively in the media.

In addition to coping with the Starfighter crisis, an essential part of his tenure as inspector of the Air Force was its restructuring, which was reflected primarily in the air force structure that came into force in 1970. With it, the air force received the organizational framework necessary for this time, which included a “specialist command solution”. In addition, Steinhoff proved to be a modernizer of the air force in many fields, for example when he called for soldiers to be anchored in the competitive society and repeatedly asked how the performance of the German armed forces could be increased with regard to numerous developments.

At the top of NATO

In September 1970 he was elected Chairman of the NATO Military Committee - an office which he assumed on April 1, 1971. He was promoted to general and for the next three years served as chairman of the highest military and military-political decision- making body of the NATO armed forces. In 1974 he retired from active service. His nomination for this task was evidently supported by various aspects: while Der Spiegel still saw Steinhoff as a possible future Inspector General in 1968, Steinhoff's age spoke against it - he was only one year younger than the then acting Inspector General, General Ulrich de Maizière . At least the Department Head Personnel in the Ministry of Defense, Lieutenant General Werner Haag , favored Steinhoff's funding for this NATO assignment from 1968 onwards. It can be safely assumed that the then Defense Minister, Helmut Schmidt, preferred the more diplomatic Ulrich de Maizière to the more pointed thinking Steinhoff.

As chairman of the Military Committee, the military policy advisory body to NATO's chiefs of staff, he was the most senior soldier in the alliance. He distinguished himself as an accomplished analyst of military developments and the effects of conflicts, such as the 1973 Yom Kippur War , and repeatedly developed critical statements on the military performance of the Alliance.

After his retirement, Steinhoff joined the Dornier Supervisory Board on June 28, 1974 . This seamless transition from the military to the armaments industry met with criticism, especially because Dornier was a major contractor for the Air Force. Defense Minister Georg Leber announced that General Steinhoff was not a member of the Bundeswehr but of NATO and that he was therefore not subject to the regulations that prohibited such a transfer for Bundeswehr soldiers. On December 16, 1977 he became Chairman of the Supervisory Board at Dornier and held this position until July 1, 1983.

Chairman of the "Steinhoff Commission"

On January 16, 1989, the expert commission, headed by Johannes Steinhoff, presented its report on the Ramstein air conference accident . Steinhoff's personal remarks on the future prevention of “ acrobatics and a little macho” in flight demonstrations were broadcast on the Tagesschau on the same day .

The committee members recommended tightening the rules for planning and holding flight events and air shows . The commission called for the establishment of a central body to approve and control all civil and military - including allied - flight events.

Johannes Steinhoff died in 1994 in the Pech district of the Wachtberg community near Bonn.

Steinhoff has received numerous awards for his work both in building up the air force and in integrating the Bundeswehr into NATO.

The Jagdgeschwader 73 received the nickname Steinhoff in his honor on September 18, 1997 . In addition, the barracks at Gatow airfield taken over by the Bundeswehr , the former Luftwaffe School II of the Wehrmacht , was named General Steinhoff barracks on October 6, 1994 .