Adolf Galland was born in Westerholt (now part of Herten ) as the second of four sons of a land manager belonging to Count von Westerholt . He attended the Hindenburg high school in Gelsenkirchen-Buer. He made his first flying experiences in 1928 at the Borkenberge airfield near Dülmen with gliders and planes belonging to the Gelsenkirchen Aviation Association. Two of his brothers, Paul and Wilhelm-Ferdinand , also became fighter pilots. Paul fell after 17 victories in the air on October 31, 1942 while serving with Jagdgeschwader 26 ; Wilhelm Ferdinand (born October 23, 1914) fell after 55 aerial victories on August 17, 1943 near Liège when he attacked US bombers from Operation Double Strike .

In February 1932 - at that time over six million people were unemployed in the German Reich (see also Great Depression ) - Galland applied to the commercial aviation school in Broitzem near Braunschweig . He received one of 20 apprenticeships for which around 4,000 men had applied. In 1933 he completed a fighter pilot training course in Italy . This was top secret, as the German Reich was not allowed to maintain air forces since 1919 ( Versailles Treaty ) . In February 1934 he joined the 10th (Saxon) Infantry Regiment in Dresden and was appointed lieutenant after graduating from war school at the end of 1934 . The armament of the Wehrmacht had a positive effect on Galland's further career. In March 1935, Galland was transferred to the 1st Group of the Richthofen Jagdgeschwader of the newly established Air Force at Döberitz airfield . During aerobatics training in October 1935, he crashed, with his nose deformed and his eyesight severely impaired, so that the troop doctor classified him as " unfit to fly ". The medical report was withheld by a superior so that Galland could still fly on.

From May 1937 Galland took part in the Spanish Civil War in the Condor Legion on the side of Franco's troops as a squadron captain of the 3rd squadron of J 88 (3rd / J 88) . After 15 months he was replaced by Werner Mölders . He was not involved in the bombing of Guernica , the first major violation by the German Air Force of international martial law ; after the war he defended it as a failed tactical attack by the Luftwaffe. The attack was actually aimed at a road bridge near the village, which served the Spanish Republicans and international brigades as a supply route. In his 1953 book The First and the Last, Galland pointed out the primitive target optics of bombers and the poor visibility caused by clouds of smoke and explosions. 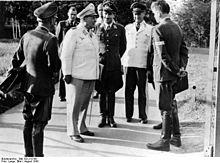 Galland initially led a squadron of Henschel Hs 123 during the attack on Poland and then became captain of the 4th squadron of Group II of Lehrgeschwader 2 ( attack aircraft ) in Heinsberg - Dremmen . On October 1, 1939, Galland was promoted to captain. The group was moved to Braunschweig for a refresher course and a preliminary exercise with the paratroopers . Since Galland did not like battle aviation, he carried out his transfer to Jagdgeschwader 27 in Krefeld . On May 12, 1940 (the third day of the Western Campaign ) Galland scored his first three kills against Hawker Hurricanes of the Royal Air Force over France. In June 1940 Galland came as commander of the III. Group to Jagdgeschwader 26 "Schlageter". On July 18, Galland was promoted to major . A short time later he was appointed commodore of JG 26.

On September 24th (about six weeks earlier the Battle of Britain had begun) Galland reported his 40th kill. On November 17, 1940, he succeeded in shooting down the hurricane of Squadron Leader Manfred Czernin , who was injured in the process.

Galland contributed significantly to the reputation of the "canal hunters" through his behavior. During this time he met the shot down and captured Allied fighter pilots Douglas Bader and Robert Stanford Tuck, both of whom he invited to his base in Saint-Omer .

On November 22, 1941, Galland was entrusted with the function of General der Jagdflieger (formerly Inspector of Fighter Pilots ) to replace Werner Mölders who had died in the accident . Among other things, he succeeded in protecting the hunt for the passage of the battleships Scharnhorst and Gneisenau and the heavy cruiser Prinz Eugen through the English Channel against the attacks of the Royal Air Force ( Cerberus company ).

After his 94th victory in the air, on January 28, 1942, he was the second Wehrmacht soldier to receive the diamonds for the Knight's Cross of the Iron Cross (see list here ).

Galland was appointed major general on November 19, 1942, making him the youngest general in the German Wehrmacht at the age of 30.

In April 1943 the prototype of the Messerschmitt Me 262 jet fighter was successfully tested. After a test flight on May 22, 1943, Galland described the power of the jet fighter as "as if an angel was pushing". Like many other officers with frontline experience, Galland was convinced that this aircraft was urgently needed to defend against the increasingly massive attacks by the 8th Air Force of the USAAF with its " flying fortresses ". However, Hitler wanted to use the Me 262 as a lightning bomber against the expected Allied invasion in the west. With a threat of resignation, Galland enforced the " Nowotny Command " to test the jet fighter as a fighter in the front line.

On April 11, 1944, he was appointed lieutenant general for his services as commander of the fighter pilot forces.

The pressure on Galland grew increasingly stronger. He was accused of not advocating unjustified court martial proceedings against young comrades with Goering, although he was aware of them.

At the end of January 1945, after " insurmountable differences " between Galland and Hermann Göring , he was replaced as general of the fighter pilots. However, at Hitler's insistence, Galland received the order to set up the " Jagdverband 44 ", which should be equipped with Me 262. Many of the most successful German fighter pilots signed up for this elite unit shortly before the foreseeable defeat.

Galland in a glider in Argentina around 1950

Galland experienced the end of the war in a military hospital in Bavaria after he was injured in the leg by the shelling of a US fighter P-51 Mustang . He was transferred to England by the Americans and spent two years as a prisoner of war there.

From 1948 Galland was hired as an advisor to the Argentine Air Force under the then President Juan Perón . Six years later he returned to Germany and became an industrial consultant and also chairman of the board of three general aviation companies and a major helicopter operator. Due to the intervention of the Commander-in-Chief of the United States Air Forces in Europe , Galland was not appointed as the first inspector of the Air Force - although advisers from the Blank office had requested it . Reasons for this intervention lay mainly in the concerns of the USAFE regarding the qualification of Galland, since he only had tasks during the war that never went beyond the squadron level. Even as a general of the fighter pilots he had only a very small share, if at all, in the operational air defense of the Reich territory. In addition, he was certified by the USAFE as having “strong neo-Nazi leanings” (“strong neo-Nazi tendencies”).

In 1953 Galland published his autobiography under the title Die Erste und die Lesten , which was a bestseller with over two million copies sold and was also published in weekly sequels in the "Deutsche Illustrierte".

For the 1969 movie Battle of Britain , Galland was hired by United Artists as a historical advisor and was there during the shooting. In 1973 he was seen in several episodes of the British television series The World at War as a witness.