This article covers the city of Gernika / Guernica; for the picture of the same name by Pablo Picasso see Guernica (picture) , for the film by Emir Kusturica (1978) see Guernica (film) .

Gernika [ geɾˈnika ] (officially Basque Gernika-Lumo , Castilian Guernica y Luno ) is a city of specific historical-political importance in the Spanish autonomous region of the Basque Country (Basque Euskadi ). From the 14th to the 16th centuries, the Castilian kings traveled to Gernika in the first year after taking power to take an oath to uphold the Basque civil liberties, the Fueros . As a result, Gernika was not only the administrative center of Bizkaia , but also became the holy city of the Basques with the "Tree of Gernika" as a symbol of freedom.

On April 26, 1937, during the Spanish Civil War , fighter planes of the German Condor Legion and the Italian Corpo Troop Volontarie flew the air raid on Guernica with explosive , fragmentation and incendiary bombs . Several hundred people, almost exclusively civilians, were killed in the large fires that followed. In the same year, Pablo Picasso created the painting Guernica or The Horrors of War for the Paris World Exhibition , which has made Gernika's destruction a symbol of war ostracism known worldwide. In Spain and Germany, on the other hand, it was not until after the end of Francisco Franco's dictatorship in the late 1970s that historical processing and steps towards reconciliation took place. Gernika's Peace Museum, opened in 2003, is also a Peace Research Center.

Trunk of the old "Tree of Gernika" set as a memorial

Gernika is located northeast of Bilbao (Bilbo) and belongs to the province of Bizkaia . The municipality of Gernika-Lumo consists of the town of Gernika and the suburb of San Pedro de Luno, 1.5 km away . The convenient location on the Oka River made Gernika a regional trading center in earlier centuries. With just over 16,000 inhabitants, the city on the Camino de la Costa (Way of St. James on the coast) is not one of the larger Basque metropolises today. 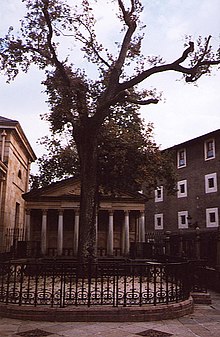 As early as the Middle Ages, says Michael Kasper, the representatives of the province gathered under the sacred tree, the oak of Gernika, to discuss all economic, social and political issues. The Castilian rulers, who in turn guaranteed the Basque civil liberties there, were assured of allegiance to the province. After the 16th century, the rulers refrained from this journey, but continued to ensure that the fueros would be observed through their deputies. In addition to the provincial government and the deputy of the crown, other important public figures also settled in Gernika, which thus developed "into an elegant small town with a metropolitan flair".

Even Wilhelm von Humboldt saw in Gernika in 1801 the administrative center of Bizkaia, "because all public business always with the words: so el arbol de Guernica , under the tree of Guernica, lift." About the conditions encountered on site tree expressed Humboldt: "You wish to see a deciduous oak, venerable for its age, in a beautiful, open, rural place, in order to be able to recall more vividly those times in which the affairs of a nation were decided more simply than those of a family. But you can find a fairly large holm oak, but nothing less than a painful holm oak, with a twisted trunk twisted by the wind, and a few dried up branches, a picture, if you like, of the constitution, which has defied some storms, but also inferior to some, and has degenerated from its original shape in more than one piece. A few younger trees have been planted next to the actual tree to replace the one immediately if it should go out. ”Even Jean-Jacques Rousseau noted after a visit to the city:“ The happiest people live in Guernica. They manage their affairs through a corporation of farmers under an oak tree, and they always behave wisely. " 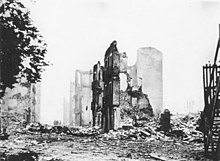 The Gernika destroyed by the Condor Legion 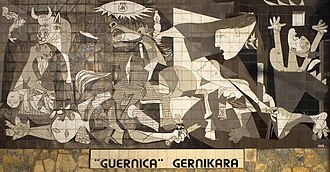 According to Michael Kasper, the high symbolic value the Basques attached to their spiritual center Gernika was certainly one of the reasons for the destructive air attack by the German Condor Legion and the Italian Corpo troops Volontarie on the side of Franco in the Spanish Civil War on April 26, 1937. Contrary to the official target - Destruction of the bridge over the Oka to make it difficult for the Basque army to retreat - the bombs fell on the city center and the civilian population, who suffered hundreds of deaths, while the bridge and the nearby arms factories were not hit. Wolfgang Wippermann sees the result of this air attack on Gernika as a Holocaust in the sense of "completely burned". The dimension of destruction, however, was denied and tabooed under the Franco dictatorship. It was denied that the bombing took place at all. Instead, “the Reds” and the Basque nationalists were accused of setting fire to the city themselves when they withdrew.

In the German public - regardless of the worldwide attention paid to Picasso's Gernica painting - the destruction of Gernika by the National Socialist propaganda was also suppressed . The nature of the procedure made it clear beyond the fascist domains that a strategy for future warfare was being tried out here. In the Nuremberg trials, Hermann Göring described the attack as “a kind of test bench for the air force”. The civilian victims are to be regretted; but you had no other option: "At that time you couldn't get this experience anywhere else."

A place of reconciliation and peace research 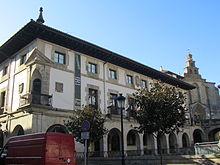 Only after the death of the dictator Francesco Franco in 1975 could the residents of Gernika officially celebrate the anniversary of the bombing of their city as a day of remembrance. However, they subsequently showed that they were ready for reconciliation with Germany. But the German reaction was initially ambivalent: While there were those Germans who tried to suppress the Nazi past in order to build a future without guilt complexes, there were those who insisted on remembering in order to create a better future, Advocate of a gesture of reconciliation towards Gernika. But this did not happen for a long time under various pretexts.

In the run-up to the 50th anniversary of the bombing of Gernika, Petra Kelly and Gert Bastian laid a wreath on the holy tree of Gernika on April 18, 1987 on their own initiative . They then proposed German support for the peace research center in Gernika, which is currently being planned, in the Bundestag , but were unsuccessful. In November 1988, the Bundestag issued a recommendation for a resolution in which a town twinning between Gernika and Pforzheim , which was also almost completely destroyed by bombing during World War II , was welcomed. After the town twinning took effect on April 29, 1989, the mayor of Pforzheim said: “Germans have brought a lot of suffering and misery to their town. So I personally ask your forgiveness for this grave injustice that was done to your city by Germans. "

Meanwhile, Gernika has a museum of peace , which is attached to the peace research center Gernika Gogoratuz (Basque for "remembering Gernika") founded in 1987 . The UNESCO has Gernika as an international city of peace excellent. 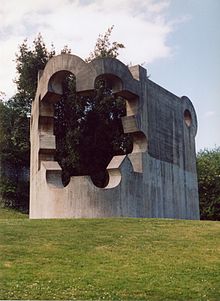 Chillida in the park: Gure aitaren etxea (Our father's house) 1988

In the mid-1990s, a reconciliation gesture promoted by Pforzheim, which provided for Germany's financial participation in the creation of a vocational training center in Gernika, failed. It was not until November 1996 that the Bundestag Committee for Education and Science decided on funds for the construction of a sports facility in Gernika amounting to one million DM each for the next three years.

In 1997, an initiative by the Gernika Gogoratuz Peace Research Center finally led Federal President Roman Herzog to officially address the survivors of the air strike on Gernika and have the German ambassador read a greeting saying, among other things: “I want to face the past and I expressly confess to the culpable involvement of German airmen. [...] I mourn the dead and injured with you. I offer my hand to you, who still bear the wounds of the past, with a plea for reconciliation. ”On April 24, 1998, the Bundestag endorsed the words of the Federal President in a declaration on the occasion of the 61st anniversary of the bombing.

Municipalities in the province of Bizkaia