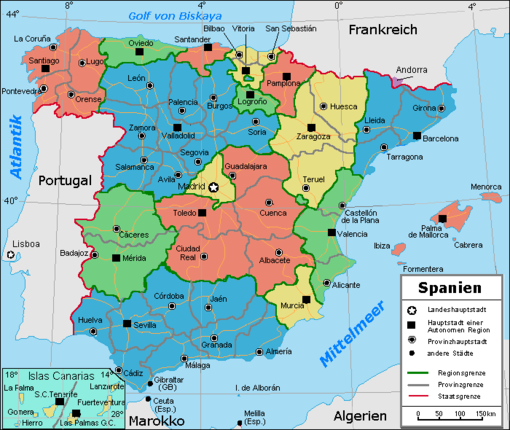 Division of Spain into regions and provinces

Many of the Spanish provinces are named after their respective capital. Only two cities, Mérida in Extremadura and Santiago de Compostela in Galicia , are capital of an autonomous region, but not capital of a province.

Seven autonomous regions are made up of a single province: Asturias , Balearic Islands , Cantabria , La Rioja , Madrid , Murcia and Navarra .

In those Autonomous Communities that consist of several provinces, the provinces each have a Diputación Provincial as a self-governing body between the region and municipalities ( municipios ). The Canary Islands are an exception. Here the Cabildos take the place of the Diputaciones.

In addition, the division into provinces is used by the Spanish central administration and for statistical purposes.

In the elections to the Spanish parliament, the provinces and the two autonomous cities of Ceuta and Melilla, which do not belong to any province, serve as constituencies. In each province, a number of representatives corresponding to the number of inhabitants is elected according to proportional representation.

The 50 provinces are divided into the autonomous communities as follows:

The present Spanish provinces were created in 1833 by the administrative reform of Javier de Burgos . The larger historical territorial units were dissolved and the Spanish territory was divided into provinces of roughly equal size based on the model of the French departments , each named after their capital. Only the Basque provinces of Vizcaya , Guipúzcoa and Álava as well as Navarra retained their traditional tax autonomy and their old names.

The division into provinces remained the basis of the territorial division of Spain until the adoption of the new Spanish constitution of 1978 . Only during the second Spanish republic did Catalonia (from 1931) and the Basque Country (from 1936) have autonomous regional governments.

The 1978 constitution made it possible to form autonomous regions ( Comunidades Autónomas ) from one or more provinces. In the seven autonomous regions, which consist of only one province ( Asturias , Balearic Islands , Cantabria , La Rioja , Madrid , Murcia and Navarra ), the self-government functions of the provinces were transferred to the newly created regions. The provinces of Oviedo (Asturias), Palma de Mallorca ( Balearic Islands ), Santander (Cantabria) and Logroño ( La Rioja ) also adopted the name of the respective region instead of the name of the capital. In the other regions, the provinces continue to exist as a separate level of self-government. Especially in Catalonia, however, the provincial division is seen as artificial. Since 2010, a regional law has provided for the previous four provinces to be replaced by seven vegueríes .