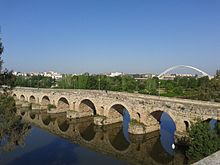 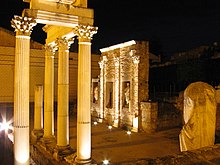 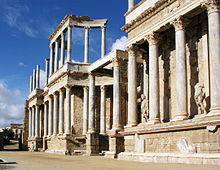 Mérida [ ˈmeɾiða ] is the capital of the Autonomous Region of Extremadura in southwest Spain . The city belongs to the province of Badajoz and has about 59,335 inhabitants (as of January 1, 2019).

The city is located in southwest Spain in the middle of Extremadura in the Guadiana Valley , south of Cáceres , west of Don Benito and north of Zafra (Tierra de Barros). To the west in the same valley are Montijo and Badajoz . The Albarregas flows here from the northeast . After Madrid (northeast) there are about 340 km away. The height above the sea is 217 m.

In the Roman Empire , the city was the capital of the province of Lusitania under the name Emerita Augusta . It was born in 25 BC. Founded by Emperor Augustus as a colony for veterans of Roman legions . Numerous representative buildings were erected over the years: theaters , amphitheaters , circuses , temples , bridges and aqueducts . For centuries, until the fall of the Roman Empire, Mérida was an important economic, military and cultural center.

Mérida later had to withstand several invasions by the Vandals until the Visigoths made it the capital of their kingdom. In the 6th and 7th centuries, an area that included almost all of today's Spain and Portugal was ruled from Mérida.

In the 6th century Christianity spread strongly among the population - the Bishop Mausona in particular contributed to this. For example, the martyr Santa Eulalia , the patron saint of the city, comes from the popular beliefs of this time .

In 713 the Arabs under Musa ibn Nusair conquered the city and ravaged it. Even under Islamic rule, Mérida remained the bishopric until it was moved to Santiago de Compostela in 1119 .

In 1230 the Christian troops under Alfonso IX conquered . of León Mérida in the course of the Reconquista .

In the 20th century, Mérida became a railway hub and center of industry . In addition, the international archeology interest in the numerous preserved ancient buildings in the city increased. During the Spanish Civil War , Republican forces tried to stop the advance of the nationalists in front of Mérida during the Battle of Mérida .

After the democratization of Spain in the 1970s, it was decided to make the city the capital of the Autonomous Region of Extremadura, given its historical importance and its central location.

The archaeological sites, including the Lácara dolmen , were added to the UNESCO World Heritage List in December 1993 .

An annual cultural festival has been held in the Roman Theater every summer since 1933.

The monuments from Roman times include:

Municipalities in the Badajoz Province