This article describes the autonomous community and province in northern Spain; for other meanings, see Navarre (disambiguation) .

Navarra ( Spanish Navarra , Basque Nafarroa ; officially: Spanish Comunidad Foral de Navarra , Basque Nafarroako Foru Komunitatea , German Foralgemeinschaft Navarra ) is an autonomous community and province in northern Spain . It encompasses the part of the historical kingdom of Navarre located south of the Pyrenees , which also comprised areas of land on the northern slope of the Pyrenees (now part of France). The capital is Pamplona (Basque Iruña ). The population of Navarre is 654,214 (as of 2019).

With a score of 0.905, Navarre ranks 3rd among the 17 autonomous communities in Spain in the Human Development Index .

Today's Navarre within the boundaries of the historical Upper Navarre stretches from the western Pyrenees to the upper Ebro Valley and is one of the smallest autonomous communities in Spain. In the north, the main ridge of the Pyrenees forms the border with France , in the west Navarre borders the provinces of Gipuzkoa and Álava , which are part of the Basque Autonomous Community , in the south it borders on the La Rioja region and in the east on Aragon . The Petilla de Aragón exclave , which is surrounded by Aragon, also belongs to Navarre.

In the region lies the wine-growing region of Navarre . There is also the Bardenas Reales desert in the southeast .

The Kingdom of Navarre came into being in 824 with the victory of Iñigo Aristas over the Moors. After their capital, Pamplona , the medieval kings had the title of “King of Pamplona”, which was first given by Sancho VI. In 1162 it was changed to "King of Navarre". The dispute between the aristocratic parties of the Agramonteses and the Beaumonteses led to the decline of the kingdom. In 1512 the kingdom was split into a part oriented towards Spain ( Upper Navarra , Spanish: Alta Navarra ) and one towards France ( Lower Navarra , French: Basse-Navarre ), whereby both parts were initially able to retain their state autonomy. Lower Navarre was institutionally united with France in 1620, while the Navarre Cortes and Fuero were finally abolished after the Carlist Wars in 1841. Upper Navarra became a province in the Spanish central state. Only a special financial autonomy remained, which was not abolished in Navarre even by dictator Franco .

The autonomy of Navarre is based not only on the provisions of the Spanish Constitution of 1978 on the possible creation of Autonomous Communities , but also on the historical rights of the territories with fueros , expressly recognized by the Spanish Constitution and, in the case of Navarre, on the former Kingdom of Navarre , which retained its independent internal institutions until the mid-19th century. This provision is the basis of Navarre's full financial autonomy. As a result, the Autonomous Community collects the taxes on its own territory and only pays a sum to the Spanish central government that is determined by a bilateral agreement ( convenio económico ). According to the Spanish constitution, Navarre could have joined the Basque Country autonomy process, but it did not.

Rather, Navarre decided to reform its formal order (von Fueros ), which was based on two laws from 1839 and 1841 . The “constitution process” differs significantly from that of the other 16 Autonomous Communities. The “Statute of Autonomy” of Navarre is the Ley Orgánica 13/1982, de 10 de agosto, de Reintegración y Amejoramiento del Régimen Foral de Navarra (LORAFNA). The title itself emphasizes historical continuity more than with the other Autonomous Communities; it is not a completely new foundation, but merely the reform of something that already exists. The law of 1839 stipulated that any change to the Fueros (i.e. the regional special law) would require the approval of the central state and the Navarre region, i.e. it would have the character of a treaty to a certain extent. The law of 1841 based on it is also known as Ley Paccionada ("the negotiated law"). This treaty character can also be found in the legislative procedure for the LORAFNA: First, the central government and the Diputación Foral (the regional government) agreed on a joint draft, which was published by the regional parliament and the two chambers of the Spanish parliament ( Cortes Generales ) in just one reading was dealt with without the possibility of amendments, which corresponds more to the ratification of an international treaty than to the usual legislative procedure. The LORAFNA also provides this procedure for subsequent changes to its text.

With the Policía Foral, Navarra, like the Autonomous Community of the Basque Country and Catalonia, has its own police force, which is not subordinate to the Spanish Ministry of the Interior, but to the regional government. 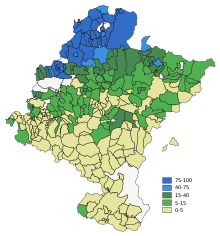 Proportion of Basque-speaking population in Navarre 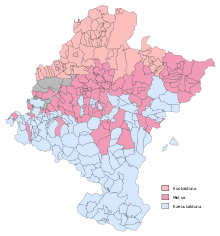 Municipalities in the Basque-speaking, mixed and Spanish-speaking zones

Village in the zona vascófona

After Madrid and the Basque Country , Navarre is the third wealthiest region in Spain . Compared with the GDP of the EU expressed in purchasing power standards Navarra reached an index of 113 (EU-28: 100) ( 2015 ). In 2019, the unemployment rate was 8.2%, making it the lowest in the country.

Important employers include a Volkswagen plant in Pamplona , where the VW Polo model is manufactured, the wind turbine manufacturer Gamesa Eólica , a subsidiary of Gamesa Corporación Tecnológica , a Liebherr plant (production of tower cranes and truck mixers), as well as BSH Bosch and Siemens home appliances plants in Estella and Esquiroz and the headquarters of the Spanish company BSH Electrodomésticos España Sa in Huarte .

The hotel group NH Hoteles was founded in Navarra in 1978 and is now the third largest operator of hotels for business trips in Europe.

Population development of the province