Vizcaya is a redirect to this article. See also: Vizcaya (disambiguation) . 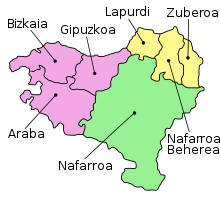 Division of the Basque Country
(in a broader sense): 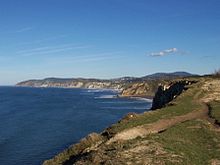 The province of Bizkaia is located on the north coast of the Iberian Peninsula .

It borders on Cantabria in the northwest , the province of Burgos in the southwest , Araba / Álava in the south and Gipuzkoa / Guipúzcoa in the east . The land border with the other provinces is 167 km long, the coastline to the Bay of Biscay , for which the Basque province is named, is 80 km; the province also includes some small, uninhabited islands such as B. Aketze . The highest point is Mount Gorbea at 1,480 m.

The climate is maritime with cool summers and mild winters. As in the other regions on the north coast of Spain, the annual rainfall is quite high. 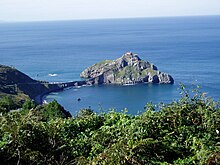 In addition to the international trading port in Bilbao, there are also the well-known fishing ports of Armintza, Bermeo , Elantxobe, Getxo , Lekeitio , Mundaka , Ondarroa , Plentzia, Portugalete , Santurtzi and Zierbana on the coast of the province of Bizkaia .

Population development of the province

In the Middle Ages, Bizkaia was a sovereign part of the Kingdom of Asturias and, from the 11th century, Castile . The Lords of Biscay, who initially referred to themselves as "Counts and Sovereigns of Biscay" ( Conde y Soberano de Vizcaya ), were among the most powerful nobles in the country, especially since they were also entrusted with the office of Alférez Mayor (royal standard bearer) of Castile for a long time which was usually associated with the office of commander of the royal army. The connection of the family (which later took the name Haro ) in the middle of the 14th century with a branch line of the ruling house of Burgundy-Ivrea , which had inherited the property of the house of Lara , was established for the Castilian kings Alfonso XI. and Peter the Cruel ( Pedro el Cruel ) became a permanent threat: the last members of the count's family were among the victims who were murdered during Peter's reign. Biskaya came to a not blood-related cousin who was also the wife of Henry of Trastamara , whereby Biskaya fell to the royal family after Henry had won the throne in 1369.