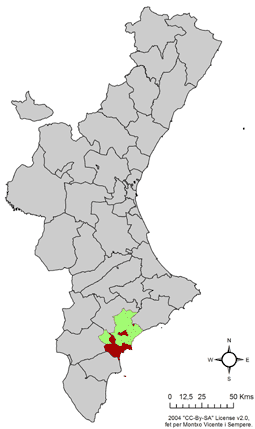 Alicante ( Spanish ) or Alacant ( Valencian ) is a Spanish port city on the Costa Blanca with 334,887 inhabitants (as of January 1, 2019). Alicante is the capital of the province of the same name and, after Valencia, the most important city in the autonomous Valencian Community .

Their economy is mainly based on tourism and wine production . In addition to wine, olive oil and fruit are also exported. There are also light industries such as food processing as well as leather , textile and stoneware industries . In addition, Alicante has been the seat of the European Union Intellectual Property Office since 1994 .

The oldest evidence of human settlement in the urban area can be found in the "Cova del Fum" in Fontcalent from the third millennium BC. South of Alicante airport, at the mouth of the Rio Segura, lies the oldest settlement in the area, the Phoenician foundation La Fonteta from the 9th century BC. Alicante was only founded 500 years later, around the year 325 BC. BC, founded by Greek settlers from Marseille as Akra Leuke ( Greek : Ἄκρα Λευκή = "white mountain" or "white point"). Hamilkar Barkas built a fortress 3 km north of today's city center. His son Hannibal is said to have dumped his elephants here. 201 BC It was conquered by the Romans who called it Lucentum . Between 718 and 1249 AD, the city was ruled by the Moors , who renamed it Al Lucant . In 1265 the city was recaptured by James I and incorporated into the Kingdom of Aragon . The city coat of arms shows a fortress, above it a label with the coat of arms of the Kingdom of Valencia. The chain of the Order of the Golden Fleece and the initials are reminiscent of Charles I.

At the beginning of the 20th century, Alicante was a predominantly Catalan-speaking city. The attractiveness of the location also brought Spanish-speaking people to the city at the end of the 19th century . To this day it is controversial whether the Valencian language is to be regarded as an independent language or "only" a regional variant of Catalan (see also the comparable case of Balearic ). During the Franco dictatorship , the use of the regional language was severely suppressed, and so the Spanish language gained an even stronger foothold. The city's Catalan name, Alacant , was also no longer allowed to be used. Today both languages ​​(Spanish and Valencian) are official languages . The Valencian / Catalan is experiencing a renaissance, not least due to the intensive support of the regional government of the Valencia region . So the name Alacant , next to the Spanish name Alicante , is official again.

For the year 2003, the Spanish Instituto Nacional de Estadística gave a share of Catalan-speaking citizens in the total population of the city of Alicante of 33 percent.

Map of the hinterland of the city of Alicante 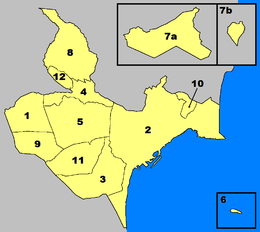 Districts of the core city

Among the main attractions of the city include the castle Castillo de Santa Barbara and the port of Alicante. The latter was highly controversial in 2006 and 2007 when the residents successfully prevented its industrialization. Santa Bárbara Castle is located on the Benacantil hill high above the city. The tower at its top is the oldest part of the castle, while parts of its substructure and foundation walls were constructed later in the 18th century.

The Explanada de España promenade , consisting of 6.5 million marble stones, lined with palm trees, is an evening meeting place for the people of Alicante. It is the place for the typical Spanish paseo or for music concerts in the open air. The promenade runs from the port, in which the replica of the " Santissima Trinidad " is located, to Gran Vía. At the end of the promenade is a 19th century monument to Vicente Bañuls.

The Santa Cruz neighborhood (Spanish: Barrio de la Santa Cruz) is a colorful part of the old town that is southwest of Santa Bárbara Castle. The small houses are built along the hill and lead up to the castle and the city walls in narrow streets decorated with flags and flower pots.

The main church in Alicante and the bishopric of the Orihuela-Alicante diocese is the Concatedral de San Nicolás de Bari. It dates from the 17th century and is in the Herrera style .

El Palmeral Park is one of the parks of Alicante. It originally emerged from a large palm garden with walking paths, children's playgrounds, lakes and streams, picnic tables, an auditorium for concerts and a view over the bay of Alicante.

Another park, the "Parque de la Ereta", is located on the Benacantil mountain and runs from the castle complex down to the old town of Alicante. The park was designed by the French landscape architects Marc and Frédéric Bonnet Bigarnet. As part of the renovation of the castle complex, the city administration organized a Europe-wide competition in 1994.

The island of Tabarca , a few kilometers away, is administered from Alicante . Once a haven for pirates, the island is now visited by tourists. The city fortifications with gates and entrenchments, the fortified church Iglesia de San Pedro y San Pablo, the governor's house, the Cueva del Llop Marí grotto with access from the sea and the Torre de San José, a 27 m high, stand-alone watchtower, are worth seeing whose construction is based on plans from the 14th century. The island can be reached by boat from the port of Alicante or Santa Pola.

An exhibition of the Archaeological Museum of Alicante Province (Museo Arqueológico Provincial de Alicante) shows local finds from the Stone Age to the early 20th century. The exhibition is divided into three rooms showing three archaeological methods (soil, water and underwater archeology) using dioramas, audio-visual and interactive elements. The museum was named European Museum of the Year in 2004.

The Museo de Bellas Artes Gravina (MUBAG) museum presents a wide variety of paintings and sculptures from the 16th to the early 20th centuries.

The Museum of Contemporary Art ( Museo de Arte Contemporáneo de Alicante, MACA ) in the Casa de La Asegurada from 1685 houses a large collection of works from the 20th century. The foundation is made up of 177 works by 114 artists (including Dalí, Picasso, Joan Miró, Kandinsky and Chagall) donated by Eusebio Sempere in 1977 . In addition, there are 134 works from the estate of the Alicante-born artist Juana Francés as well as over 500 works by Sempere, which the city council has bought since 1997.

The Volvo Ocean Race Museum opened in the port in June 2012 and is dedicated to sailing and the history of the regatta.

Other museums of lesser importance are:

The main festivity in Alicante is the Hogueras de San Juan from June 21st to 24th, which is similar to the Fallas in Valencia. During these midsummer bonfires, artistic sculptures as high as a house are burned throughout the city. A fireworks competition is also held at the Hogueras.

Before Easter, processions for Semana Santa take place in Alicante . The residents of the San Blas district celebrate the Moros y Cristianos . The second Thursday after Easter is the day of the “ Romería de la Santa Faz”, a pilgrimage to a monastery a little outside Alicante, where a sheet with the imprint of Christ on the face is venerated as a relic. The relic has been in the monastery since the 15th century and is said to have miracles.

There are regular ferry connections to the Balearic Islands and the Algerian Oran as well as an international airport nearby. Local public transport includes numerous bus lines and four light rail lines. In long-distance rail traffic, Alicante can be reached several times a day with direct trains from / to Madrid and Barcelona, ​​and since June 2013 there has also been a high-speed connection with the Spanish capital. Alicante has one of the oldest rail connections in Spain. The Alicante Terminal Station is the largest of the town.

Alicante has a partnership with Wenzhou , China.

A gastronomic specialty of the city is turrón (kat. Torró ). It usually consists mainly of almonds (approx. 60%), egg white and honey , but turrón is now also available with nougat and nuts as well as a few other variations. In the Chronicles of the Underworld book series , the name of the shadowhunter capital is also Alicante.

Panoramic view of Alicante from the Castillo de Santa Bárbara .

Municipalities in the province of Alicante