The egg white (from Middle High German eierklār ) or egg white ( Latin albumen ovi or album ovi , zoologically usually simply albumen or also called deutolecith ) is a mixture of thin and gelatinous components around the yolk (vitellus, protolecith) of the eggs of reptiles , birds and egg-laying Mammals ( monotremes ) (see amniotes ). It is used for protection and contains substances that are important for the growing embryo, such as waterProteins , ions and water-soluble vitamins . In contrast to the yolk, it is not part of the original egg cell , but is deposited in the fallopian tube (oviduct) by special glands.

Also “perivitelline”, i.e. liquid and gelatinous substances located between the yolk and the egg shell in the eggs of various invertebrates , are referred to in zoology as egg white or deutolecith . There, too, this egg component often plays an important role in nourishing the embryo. This is especially the case with the belt worms , " middle snails " and lung snails, which often live on dry land or in fresh water .

Egg whites of the chicken egg 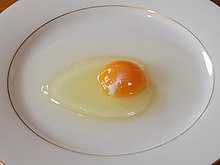 In terms of the egg component, the terms “egg white” and “protein” generally refer to bird eggs and in particular to chicken eggs , which of all bird eggs have the greatest importance as human food.

Egg white is an aqueous, slightly yellowish liquid that consists of three layers of differing viscosity . Inside, surrounded by the egg white, lies the yolk ball, which is fixed by two spirally twisted strands (hail cords, chalazes) that are attached to the yolk skin and merge into the egg white and that stick to the yolk when the egg is broken. Egg white is an approximately 10% aqueous solution of various globular proteins that contains ovomucin fibers . All other components take a back seat. The viscous egg white differs from the thin egg white only in that it contains about four times the amount of ovomucin. Besides water, egg white from chicken eggs consists of various proteins (11%), of which ovalbumin, with an average of 54% by weight, makes up the largest part. In addition, an average of 12% conalbumin (ovotransferrin), 11% ovomucoid , 3.5% ovomucin, about 3..4% G 1 , G 2 and G 3 globulin , 1% ovoglycoprotein, 0.8% flavoprotein , 0 , 5% ovomacroglobulin, 0.1% ovine inhibitor, 0.05% avidin and 0.05% cystatin . The denaturation temperature of the proteins is between 62 (conalbumin) and 92 ° C (G 2 globulin). Several egg white proteins have biological activity, for example as enzymes (lysozyme), enzyme inhibitors (ovomucoid, ovine inhibitor) and complexing agents for coenzymes (flavoprotein, avidin). This biological activity may be related to protecting the egg from microbial spoilage. The lipid content of egg white is negligibly small at 0.03%. The carbohydrates (about 1%) are about half protein-bound and free. 98% of the free carbohydrates consist of glucose, along with mannose, galactose, arabinose, xylose, ribose and deoxyribose. Free oligo- and polysaccharides are missing. The content of minerals in egg white is around 0.6%. These include mainly sulfur, sodium, potassium, as well as phosphorus, magnesium, calcium and iron. It also contains important electrolytes and trace elements . In 100 g egg white there are 170 mg sodium ions , 155 mg potassium ions , 11 mg calcium ions , 20 mg bound phosphorus and 0.2 mg bound iron , as well as vitamins B1, B2, B5, B6, B7, B9 and niacin .

The egg white itself is practically cholesterol free .

Egg white is a pseudoplastic liquid whose viscosity depends on the shear rate. The surface tension (12.5% ​​solution, pH 7.8, 24 ° C) is 0.0499 Nm −1 . The pH value of the albumen of a freshly laid egg is 7.6–7.9 and increases as a result of the diffusion of dissolved carbon dioxide through the shell during storage, depending on the temperature, up to 9.7.