Amniotes (Amniota) Amniotic animals or umbilical animals are a large group of terrestrial vertebrates (Tetrapoda). Their representatives are primarily characterized by the ability, unlike amphibians , to reproduce completely independently of water. Instead of a short embryonic phase followed by a free-living fully aquatic larval stage , their early ontogenesis takes place over a long embryonic or fetal phase without a free-living larval stage. The embryos or fetuses of the amniota develop in an amniotic cavity ( amniotic sac ) filled with amniotic fluid ( amniotic sac ), which is surrounded directly and completely by the amnion and indirectly more or less completely by additional extraembryonic membranes .

The amniota are considered a monophyletic taxon , i. That is , all recent and extinct species of this group go back to a single common original species . The more recent subgroups of the amniotes are the scaled lizards (Lepidosauria), the turtles (Testudines), the crocodiles (Crocodylia), the birds (Aves) and the mammals (Mammalia). 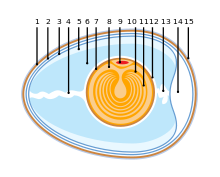 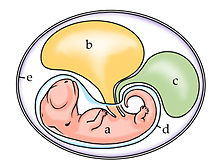 In addition to the large yolk ("egg yolk"), which mainly functions as a nutrient store (called food yolk or nutritional yolk), an amniotic egg also contains albumen ("egg white"), which serves as a fluid reservoir and shock absorber. It is enclosed by a relatively solid, either parchment-like or chalky shell. The solid shell, the high water content and the large supply of nutrients make the amniotic egg an autonomous survival capsule for the developing embryo, which actually makes a fetal stage possible in the first place.

With regard to their reproductive biology, all sauropsids , including birds , can be seen as recent basal amniotes. In their large yolk-like egg cells , food yolk and educational yolk (the actual germinal system, also educational plasma, germ stain and, in fully developed hen's eggs, also popularly known as “houndstooth”) are unevenly and asymmetrically distributed: the food yolk by far outweighs the peripheral educational yolk. This type of egg is called macrolecithal or telolecithal . In the case of macro- / telolecithal egg cells, the furrow in the initial stage of embryonic development only includes the yolk . The fact that the monotremes, as very original mammals, also have macro- / telolecithal ova or eggs shows that this type probably represents the original state in all amniotes.

The amniotic embryo forms four extraembryonic membranes in the early stages : the amnion, the chorion (serosa), the yolk sac and the allantois. The amnion immediately surrounds the embryo. It forms a bladder that is filled with a liquid (amniotic fluid) that is secreted by the amniotic cells . This fluid-filled cavity is called the amniotic cavity or, especially in connection with the fetal development of placental mammals, the amniotic sac . Among other things, it protects the embryo or fetus from dehydration. The extraembryonic coeloma, which is also filled with fluid, extends between the amnion and the chorion, the volume of which continuously shrinks as a result of the growth of the embryo or fetus and thus of the amniotic cavity and finally approaches zero. While the two embryonic envelopes amnion and chorion are not supplied with blood, the yolk sac and allantois, which protrude into the extraembryonic coelom and are connected to the intestines of the embryo or fetus, have a network of blood vessels. Nutrients from the yolk are supplied to the embryo or fetus via the yolk sac. A large part of the gas exchange takes place via the allantois; H. the supply of oxygen and the removal of carbon dioxide. In addition, the membrane sac, which is formed by the allantois, absorbs the nitrogen-containing metabolic end products, the embryonic or fetal urine ("embryonic urinary bladder").

Consequential modifications of the reproductive organs and the mode of fertilization

Oviduct of a domestic chicken : 1. Infundibulum (contact area of ​​the oviduct with the ovary), 2. Magnum (formation of the albumen), 3. Isthmus (formation of the egg shell skin), 4. Egg holder with shell gland (uterus, tubular uterus and uterus pocket - formation of the calcareous Egg shell), 5th vagina with internal egg ready to be deposited and cloaca opening. Functions according to Brade (2008).

As a result of the egg-laying outside of bodies of water and as a consequence of the solid egg shell, which is largely impermeable to liquids, internal fertilization that takes place well before the egg is laid is imperative for amniotes . This is handled via the oviduct , the “egg-laying organ” already present in anamnical vertebrates, in that the female's vagina takes in the male's sperm , from where they penetrate deeper into the oviduct and fertilize the egg cells that have migrated from the ovary .

Subsequently, during their migration through the oviduct in the direction of the cloaca , the albumen is secreted around the fertilized egg cells and finally the outer egg shell in the uterus .

For early anamniotic terrestrial vertebrates, being able to reproduce outside the water had the potential to open up new habitats and thus avoid competition from other anamniotic species. With the development of the amniote egg, as it occurs today in reptiles, birds and monotremal mammals, this potential could be used. The terrestrial vertebrates were now able to spread to very dry regions and to populate the continents across the board.

In the placental mammals , this strategy has been significantly developed. With them, the uterus is no longer the organ in which the egg shell is formed, but the organ in which the embryo and fetus develop within the mother's body until they are fully mature ( uterus ). Here part of the chorion grows together with part of the uterine wall and forms the placenta through which the embryo and fetus are fed and excreted . In marsupials , although the fetus does not mature in the uterus, it does mature in the mother's brood pouch equipped with a mammary gland. Due to these modifications of the mode of reproduction, the egg cells of "real" mammals (Theria) are no longer macro- / telolecithal, but poor in yolks with a symmetrical distribution of educational and food yolks ( isolecithal ).

The term was first introduced in 1866 by Ernst Haeckel ("Amnionthiere") for the "higher" vertebrate classes reptiles , birds and mammals - to distinguish them from the "lower" vertebrate classes, the fish and amphibians , which Haeckel summarized under the name " Anamnia " were. In the modern, cladistic systematics of recent land vertebrates, the clade of frog amphibians (Anura), caudal amphibians (Urodela) and caecilians (Gymnophiona) known as amphibia is the sister group of amniotes.

The amniotes did not develop in the parent group of today's amphibians, but from early, anamnical representatives of a group known as Reptiliomorpha . The latter also includes the amniotes in the modern system. Particularly in the anatomy of the vertebrae , the similarity between early reptiliomorphs and amniotes is greater than between early reptiliomorphs and the earliest terrestrial vertebrates or the putative fossil relatives of the amphibians living today.

The possible family relationships are illustrated by the following, greatly simplified cladogram : 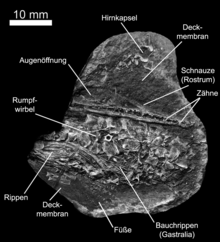 Mesosaurus fossil fetus from Uruguay. Its posture suggests that the animal was in an egg at the time of death and was probably about to hatch. The fossil shows no evidence of a mineralized egg shell.

The first amniotes probably did not lay eggs with calcified shells . Such eggs are very difficult to preserve in fossil form . The oldest relatively clear evidence of an amniotic egg including the fetus it contains comes from Mesosaurus from the Lower Permian of Uruguay. § However, Mesosaurus fossils occur in large numbers in these aquatic sedimentary rocks in a largely anatomical context (articulated) (see → Conservate deposit  ). This means that the paleoenvironment of that time offered good conditions for fossil conservation, so that the statistical probability that some Mesosaurus fetuses have survived is relatively high. However, the formation of the first amniotes probably took place in terrestrial, dry habitats, in which the conditions for the transmission of fossils were usually far less favorable. Furthermore, Mesosaurus is undisputedly a secondary (semi-) aquatic reptile, which means that the amniotes in the lower Permian must have already undergone a certain adaptive radiation . In fact, in other regions of the world (North America, Europe) with the " pelycosaurs " there is another undoubted line of development of the amniotes (see below) at the end of the Carboniferous and in the Unterperm with, among other things, herbivorous (herbivorous), that is, ecologically also already specialized , representatives verifiable.

When the first amniotes lived can therefore hardly be established from the fossil record of amniotic eggs alone. The systematic investigation and evaluation of the morphology of terrestrial vertebrate fossils provides a remedy to this question : In the modern, cladistic systematics , the amniota are a crown group , that is, they are defined by the most recent common ancestor (the hypothetical parent species) of all species living today that reproduce with the help of the amniotic egg (or a corresponding further development). By examining the morphology of recent amniotes and various fossil terrestrial vertebrate species, family trees (more precisely: cladograms ) can be constructed from which it is possible to read off which fossil species go back to this common parent species, even without any of these species or the time in which they lived , amniotic eggs are fossilized. The geologically oldest known species to which this applies are Hylonomus lyelli , Protoclepsydrops haplous , Paleothyris acadiana and Archaeothyris florensis , four rather small, lizard-like animals from the Upper Carboniferous of Nova Scotia (Canada).

Accordingly, the amniotes split into their two main lines before these four species appeared:

In fact, according to the analyzes carried out , Archaeothyris is a representative of the synapsid line and Hylonomus and Paleothyris are representatives of the sauropsid line. Which of the two lines belongs to Protoclepsydrops is still unclear. The division of the sauropsid line into eureptiles and parareptiles must have already taken place, because Hylonomus and Paleothyris are representatives of the Eureptilia. The oldest parareptile is Erpetonyx arsenaultorum from the youngest Carboniferous on Prince Edward Island (also Canada).

The relationship between the amniotes is illustrated by the following, greatly simplified cladogram (note the position of Archaeothyris or Hylonomus and Paleothyris at the base and the position of mammals or recent reptiles and birds at the "upper ends" of the two main branches of the cladogram ):

§ The next most recent (still indirect) evidence of amniotic eggs comes from the Lower Triassic of Arizona. These finds are imprints of suspected phytosaur or aetosaur eggs in sandstone.
¶ "Sauria" refers here in the sense of Gauthier et al. (1988) the common clade of Lepidosauromorpha and Archosauromorpha and should not be confused with the paraphyletic subtaxon lizards (also Lacertilia) of the Lepidosauromorpha, also called "Sauria" .