The gnathostomes (Gnathostomata) ( ancient Greek γνάθος gnathos " pine " and στόμα stoma "mouth", "mouth", "throat"), sometimes jaw animals or pine mouths , are a superclass within the sub-tribe of the vertebrates . With the exception of the primitive lampreys and hagfish with around 100 species, this superclass includes all ( recent ) vertebrates living today , i.e. the cartilage and bony fish , amphibians , reptiles , birds and mammals , a total of over 54,000 species (= 99.8 percent of all vertebrates) including humans.

The jaw mouths developed in the Paleozoic (ancient times), their fossil record begins with the spiny sharks (Acanthodii) in the early Silurian . They have represented the majority of all vertebrates since the middle of Devonian , i.e. for 380 million years.

The most important autapomorphy (characterizing feature) of the jaws is the strengthening of the edges of the mouth by articulated cartilage or bone braces. The result was a mostly toothed jaw , which enables the animals to grab food, hold it in place and chop it up. This opened up completely new nutritional options for the pine animals.

According to the classic model of the jaw revolution, the mandibular arch was formed from a gill arch , a supporting skeletal element between the gill pockets . It is not certain which gill arch it is. One hypothesis assumes that it is the third and that the two premandibular arches in front of it have receded. Cartilage (labial cartilage) in the skull of the Neoselachii (modern sharks and rays ) could be remnants of the reduced anterior two gill arches. The jaw arch of the jaw mouth consists only of the middle two arch elements, which are connected to one another by the primary jaw joint, in mammals by the secondary jaw joint . Strong adductor muscles are used to close the jaws.

The following the turned-arch gill arch gill arch is the hyoid arch made (Hyalbogen, hyoid arch), the other, with a few exceptions, mostly five gill arches remain the basic pattern of Gnathostoma as a carrier of the gill apparatus. The gill arches each have four skeletal rods (pharyngo-, epi-, cerato- and hypobranchial). In the basic pattern of the gnathostoma there is an injection hole between the mandibular arch and the hyoid arch through which respiratory water can be drawn in. Teeth formed from bone scales that can sit on the edges of the jaw, in the oral cavity and in the throat.

An alternative hypothesis sees the pine homologous cartilage parts in the velum of lamprey larvae (Ammocoeteslarven). The velum sits in the throat of these filtering organisms and, together with the gill muscles, creates the flow of water from the mouth opening to the gills. According to this hypothesis, the jaws developed from a structure that has always been used for food intake. 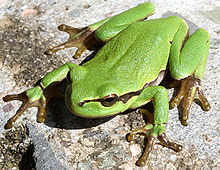 European tree frog : Four limbs are another feature of the jaw mouth

The caudal fin was originally heterocerk , that is, the end of the spine curves up and supports the upper, larger part of the caudal fin.

Another autapomorphy are the paired thoracic and pelvic or pelvic fins supported by skeletal elements , which above all improved the maneuverability of the gnathostoma and from which the front and rear legs of the terrestrial vertebrates emerged. The extinct, jawless Osteostraci also had paired pectoral fins, but they were skeletal and only supported by muscles.

The pectoral fins are articulated by the shoulder girdle , the pelvic fins by the pelvic girdle . The paired fins are moved by muscle groups, the elevators (lifters, straighteners) and the depressors (sinkers, flexors).

The eyes of the jaws have a real cornea . The location and innervation of the six external eye muscles differ from those of the jawless ones . The development of the inner eye muscles gives the eye the ability to image an object at any distance between the near and far point on the fovea of the retina of both eyes, so that a clear visual impression is created ( accommodation ). Two nostrils develop as an organ of smell. The organ of equilibrium has three semicircular canals , one for each level in three-dimensional space. A lateral line organ as well as electroreceptors probably belong to the basic pattern of the jaws.

The brain of the jaw mouth is divided into three parts, the prosencephalon (forebrain), mesencephalon (midbrain) and rhombencephalon (hindbrain). One spinal nerve emerges from the neural tube for each muscle segment and divides into a branch on the back and one on the abdomen. Glial cells on the axons of peripheral nerves enable information to be passed on quickly.

In the digestive tract one was gastric developed as a storage organ. In primitive gnathostomas, the surface of the intestine is enlarged by a spiral fold. The liver and pancreas are the largest intestinal pituitary glands and were formed from the endoderm . The digestive tract, kidneys and sex tract ( egg and spermatic ducts ) end in a cloaca .

Skull of the placoderma Dunkleosteus

The jaw mouths are a superclass of the sub-strain vertebrates (Vertebrata). Among all the jawless ones, the extinct Osteostraci (perhaps together with the Pituriaspida ) share the greatest number of autapomorphies with the jaws, especially paired muscular pectoral fins, a bone ring (scleral ring) around the eyes, and the heterocercial caudal fin. They may be the jaw-mouthed sister group .

The jaw mouths are classically divided into two sub-taxa, the fish (Pisces) and the terrestrial vertebrates (Tetrapoda). But since the latter emerged from the former, the fish are not a monophyletic taxon. They are therefore not recognized as a natural group (closed community of descent) in modern zoological systematics.

The phylogenetic relationships within the jaw mouths under the aspect of modern systematics are instead given by the following cladogram (as of 2004):

The Chondrichthyes comprise only 2% of the Gnathostomata species, the Euteleostomi on the other hand 98%. About half of all Euteleostomi are Actinopterygii (approx. 28,000 species), the other half are Sarcopterygii (including Tetrapoda). According to a molecular biological study, more than 85% of recent jaw mouth species emerged in six phases of adaptive radiation . The remaining 15 percent are more likely to be living fossils , i.e. species that had a comparatively long time to emerge.