This article is about the fish. For the aircraft type, see Focke Rochen .

Rays live in all seas worldwide, some species also in the deep sea . Real rays (Rajidae) and electric rays are more species-rich in marine areas of the temperate latitudes , the other families in tropical regions. Few species of the stingray family (Dasyatidae) also live in brackish and fresh water . In South America , with two exceptions , the Potamotrygonidae live in the major streams and rivers of the continent. 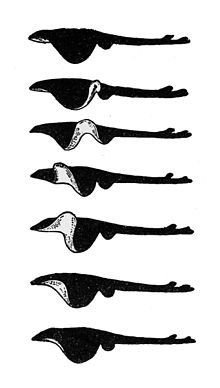 Rays have a very flattened body and large pectoral fins that are fused with the head. The shoulder girdle is ring-shaped and connected to the spine in a fixed or articulated manner. Some of the anterior vertebrae are fused into a synarcual. The mouth, the nostrils and five pairs of gill slits are located on the flattened, mostly light-colored underside. On the top there are eyes and the vented spray holes through which the water for breathing enters. The upper eyelid is firmly attached to the eyeball. The top is adapted to the respective habitat of the ray, so it can range from sand-colored speckled to black. The upper jaw , the palatoquadratum, is not connected to the neurocranium , but is only supported by the large hyomandibular .

Most rays feed on hard-shelled invertebrates such as clams , crabs, and echinoderms .

The fiddle rays as well as the saw rays and the electric ray-like move, like most plate gills (Elasmobranchi), by snaking the trunk of the body and the caudal fin. Real rays move their large pectoral fins in waves (undulation) and eagle rays flap them up and down like wings ("underwater flies").

All rays, with the exception of the common rays, which lay capsule-like eggs, are ovoviviparous . H. the young hatch in the mother's body or shortly after they have laid their eggs.

The rays have traditionally been viewed as a cartilaginous fish taxon of the same rank as the sharks . In 1996 the Neoselachii (a taxon that includes the modern sharks and rays) were divided independently by de Carvalho and Shirai into two monophyletic taxa according to morphological characteristics , the Galeomorphii (Galea near Shirai), among which mainly large ones, which inhabit the open water Sharks are assigned, and the squalea , to which many bottom-dwelling as well as deep-sea sharks and also the rays belong. The shark's taxon would therefore be a paraphyletic (a form taxon ), the rays a subgroup of the squalomorphic sharks.

In the meantime, however, there are several molecular biological studies that confirm a basic dichotomy between sharks and rays. The morphological correspondences of the squalomorphic sharks with the rays then developed convergent . Since the rays, like the modern sharks, can be traced back to the fossil record since the early Jurassic , an ancestry of the rays at the end of a long evolutionary line of the Squalea is not supported by paleontological data.

The internal systematics of the rays is highly controversial and there are several proposals. Wikipedia follows Aschliman and colleagues here, who take a phylogenetically oriented approach and divide the rays into two lines, the Rajiformes , which move through an undulating undulation of their pectoral fins and are called 'skates' in English, and a clade of all the other rays, in the English called 'rays', which, like most sharks, move by winding their trunk and tail fin or, as it were, fly through the water with even flaps of their wing-like pectoral fins (stingray-like).

The Rajiformes - most of the ray species occurring in the European marginal seas belong to this order - are now divided into four families, all of which used to belong to the family of real rays (Rajidae). The second large skate class combines the electric rays, the fiddle rays, the saw rays and the stingray, whereby the electric rays, together with their sister group , the thorn-back guitar rays (Platyrhinidae), occupy a basal position within this clade, followed by a clade of three genus of fiddle rays. The remaining rays are divided into a clade of fiddle rays and saw rays, for which Gavin JP Naylor and colleagues proposed the new order name Rhinopristiformes, and into the stingray-like (Myliobatoidei) with their sister group, the monotypical Zanobatoidei . The sawmills stand deep within a large fiddle- ray clade , with the fiddle- ray genus Glaucostegus as a sister group.

This concept of the relationship within the rays reflects the following systematics:

Rays from the originally considered group of fiddle rays appear in fossil records in the Upper Jurassic . The genera Aellopos and Asterodermus are known from the Solnhofen limestone . Another fiddle ray is Rhombopterygia from the Upper Cretaceous Lebanon. The recent genus of fiddling rays Rhinobatos , Trygonorrhina and Zapteryx have been fossilized since the Lower Cretaceous and the Eocene .