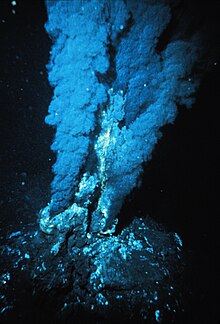 Black smoker on a mid-ocean ridge

The deep sea is usually the largely to completely lightless areas of the sea that are below a depth of at least 200 m. According to this definition, the deep sea covers around 88% of the area of ​​the oceans.

Apart from hydrothermal sources, also known as black smokers , there is no primary biological production in the deep sea , as the absence of light excludes plant life . Despite the apparently very hostile conditions, there is still a diverse animal world , including predators and scavengers, as well as animals that specialize in their diet on symbiotic bacteria or archaea .

The temperature is consistently low (−1 ° C to 4 ° C). At a depth of 10,000 m there is a pressure of around 1,000  bar . Strong currents are rare, and seasonal fluctuations are limited to the amount of detritus that sinks here from the illuminated areas and is the main food source of the deep sea.

The areas of the deep sea lying at a depth of 1,000 m and more cover an area of ​​around 318 million km², which represents around 62% of the total surface of the earth.

In the deep sea or at its edges there are tectonically remarkable zones:

The ridges and gullies have only been investigated using geophysical methods in the last few decades and have proven to be the "seams of plate tectonics ". Among other things, they make themselves felt in the earth's gravitational field and in the distribution of earthquakes .

The counterpart of the deep sea is the “flat sea”, especially the shelf areas off the continents .

The outline of the pelagial

The ocean is divided into two large areas:

The pelagial ( Greek pelagos , sea) is the habitat of free water. In lakes and the sea, the pelagic is the open water area away from the shore above the bottom zone ( benthal ).

In the sea, the pelagic is divided into five zones, according to the morphological division of the water floor:

According to some marine biologists , abyssopelagial, bathypelagial and pelagic hadal (also hadopelagial, hadal pelagial, hadopelagic zone) cannot be delimited due to their similar hydrological and biological properties, which is why they are combined into one zone of the deep sea.

Similar to the Benthal (analogous to the Litoral and Profundal ), the Pelagial can be divided into two biological production zones.

The boundary between the two zones is called the compensation level (the biomass built up through photosynthesis is broken down again through respiration processes, the net biogenic production is approximately zero). The remaining amount of light available for photosynthesis is so small that only a small amount of biomass can be built up by the plants ( producers ). This, like the oxygen generated , is completely consumed again by them through respiration. In the greater (i.e. tropholytic) water depths, all the oxygen and all nutrients necessary for the organisms to live must therefore come from the trophogenic layer by means of substance transport, or the inhabitants ascend (vertical migration) and actively fetch the required substances. The actual position of the trophogenic layer and thus also the compensation level depends on the current photosynthetic output, which in turn is influenced by various factors. The light permeability of the water is determined by the local conditions (water turbidity, plankton density ), the photosynthesis output fluctuates in higher latitudes directly with the course of the seasons.

The Benthal ( Greek ) is the area of ​​the sea floor, which is also divided into horizontal zones:

In the deep sea, 90 percent of the near-ground biomass consists of sea ​​cucumbers .

There are some ecosystems on the seabed that use inorganic substances for their energy production ( chemosynthesis , chemolithotrophy ). The starting point are chemoautotrophic bacteria that live in symbiosis with beard worms and mussels , on which other animals can feed. These ecosystems arise where water emerges from the soil, which is enriched with methane and hydrogen sulfide , for example . These locations can be found in the area of ​​the mid-ocean ridges as well as in the subduction zones and continental slopes .

In the area of ​​the ridge there are hot springs , where water up to 400 ° C exits, and warm springs , where the hot water begins to cool deeper in the ground and, after emerging from the ground, is only slightly warmer than the surrounding cold sea water . The warm thermal springs can also be created by an exothermic chemical process, serpentinization , in which peridotite is converted to serpentinite by absorbing large amounts of seawater , which also generates methane (CH 4 ), hydrogen sulfide (H 2 S) and hydrogen gas (H 2 ) can be. This mechanism is not tied to the mid-ocean ridges, so that such thermal springs can be observed, for example, in the spreading zone of a backarc basin . Such a source was first discovered in 2000 ( Lost City ). The heated water creates so-called black and white smokers , on average 20 m to 25 m high chimneys, which consist of precipitated minerals.

Cold springs can be found in subduction zones and continental slopes (see methane spring or Cold Seep ), whereby the water emerging from the ground is not heated. The ecosystem found at a cold spring is also based on the symbiosis with chemoautotrophic bacteria, but since these occur both at a depth of several thousand meters and on the edge of the deep sea on the continental slopes at a depth of several hundred meters, the range of species to be found can be larger. The cold spring area is characterized by the fact that calcium carbonate is deposited in crusts and that methane hydrates can be found.

The history of deep sea research is relatively young, since the extreme conditions prevailing in the deep sea place enormous technical demands on people.

Importance of the deep sea

Oceans can be roughly divided into the near-surface layers and the deep sea. While the former react with fluctuations in currents, temperatures and salinity within weeks and months due to the direct coupling to the rapidly changing atmospheric conditions, changes in the deep sea are caused and played out by fluctuations in surface conditions in limited areas of polar and subpolar latitudes because of the enormous masses of water involved in periods of many decades to centuries. The deep sea plays an important role, especially with regard to anthropogenic climate change , especially when it comes to questions relating to global climate change .

The importance of the polar or sub-polar areas is based on the density-related anomaly of the water (greatest density at approx. 4 ° C) or its modification by the salinity of the oceans. The salt content of the oceans averages around 34.7 ‰, which significantly changes the properties of the water. The temperature of the density maximum shifts at an average salinity of 34.7 ‰ to −3.8 ° C and thus falls below the freezing point of −1.9 ° C. As a result, when the sea cools down until the ice begins to form, a convection movement occurs : cooled (and therefore denser) water sinks, warmer (and less dense) rises from deeper layers. The warmer water releases its heat content into the atmosphere and sinks again when it cools down again. The water absorbs atmospheric gases (e.g. carbon dioxide ) and thus ensures that they are transported into the deep sea. For this reason, the convection areas are also those marine areas in which the highest proportions of anthropogenic carbon dioxide can be found.

In addition to these vertical convection movements, horizontal ocean currents also play an important role in the deep sea (see also: global conveyor belt ). Depending on the current surface conditions, cold water masses of different characteristics arise, which can be traced along their distribution routes in the deep sea. These cold water masses can be distinguished by their temperature, salinity and density values, the oxygen content or the content of anthropogenic trace gases from their area of ​​origin. The deepest waters are predominantly Antarctic origin, they are also called " Antarctic bottom water , called", and in English as "Antarctic Bottom Water" (AABW). The water masses of arctic origin have a somewhat lower density. These are called " North Atlantic Deep Water , referred to" or in English as "North Atlantic Deep Water" (NADW) which is as powerful intermediate layer above the ground water.

Although the deep sea takes up most of our planet, less is known about it than about the surface of the moon. This is due to their relative inaccessibility: Few countries have landers , deep-sea submarines or ships large enough to retrieve samples from the deep sea. Sampling at a depth of 8000 m already requires 11 km of cables. It also takes 24 hours to lower a device to this depth and to bring it up again. The equipment and ships are very expensive, a large research ship costs several tens of thousands of euros per day. Animals whose behavior is to be investigated must also be observed in their habitat or brought up in special pressure vessels, as they would not survive the enormous changes in pressure alive. Also, due to the scarcity of food, deep-sea animals are usually not very numerous, so many samples are required to even detect a species.

The deep sea in art and literature

The fascination of the unknown is also evident in literature, film and music: