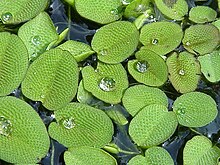 A swimming fern ( Salvinia minima ) as an example of a photoautotrophic organism: light energy, water, inorganic substances and carbon dioxide are sufficient for it as “food”.

Under Autotrophie (literally "self-eating" of ancient Greek αὐτός cars "self" and τροφή trophic " diet ") is in biology , the ability of living creatures understood their building materials (and organic reserve material ) exclusively of inorganic building materials. This structure of matter requires energy.

On the basis of the biomass production of autotrophic organisms, heterotrophy emerged, a form of nutrition in which organic compounds are used to form building materials. Animals , fungi and many bacteria and archaea live heterotrophically. They either feed themselves as consumers or are destructive .

According to the energy source, a distinction is made between photoautotrophy and chemoautotrophy.

Photoautotrophy is the use of light as an energy source in autotrophy . Living things with this ability are called photoautotroph. Almost all plants and algae and some bacteria, such as B. Purple sulfur bacteria and green sulfur bacteria , with the help of systems containing chlorophyll , convert light energy into chemical energy ( ATP ) ( phototrophy ), which they use to build up building and reserve materials from inorganic materials (see photosynthesis). In oxigenic photosynthesis, hydrogen is obtained from water for reductions in the assimilation of carbon dioxide and the oxygen in the water that is not required is released as molecular oxygen (O 2 ), which heterotrophic organisms use for breathing .

Chemoautotrophy is the use of chemical energy to use CO 2 to build biomass . Chemoautotrophy occurs in bacteria and archaea. Examples include a. Sulfur bacteria , nitrifying bacteria and some methane producers . The reducing agent for CO 2 fixation can gain from inorganic substances such organisms. That is why they are referred to as lithotrophic ("feeding on stones") or, in combination with their chemoautotrophy, as "chemolithoautotroph".

Carbon autotrophic organisms generally use carbon dioxide CO 2 as the inorganic carbon source for the formation of organic building materials . In some aquatic plants also the uptake of could carbonate - ions are detected. The inorganic carbon compounds are reduced and the carbon is incorporated into organic compounds. The main biological metabolic processes with the help of which carbon dioxide is assimilated are

All plants assimilate carbon dioxide with the help of the Calvin cycle, which is also the most energy-intensive. Some microorganisms have other ways of assimilating carbon dioxide (for example the reverse citric acid cycle).

Heterotrophic organisms can also cover smaller proportions of their carbon requirements through carbon dioxide assimilation. This reaction occurs, for example, during the carboxylation of pyruvate at the beginning of gluconeogenesis or as an anaplerotic reaction to fill the citric acid cycle. For this reason, by definition, only those organisms are considered autotrophic that meet their carbon needs exclusively from inorganic sources.