The gluconeogenesis ( latinisierte case of gluconeogenesis , a compound word from ancient Greek γλυκύς glykys "sweet", νέος Neos "new" and γένεσις genesis "generation") is the formation of D - glucose of organic non-carbohydrate precursors, such as pyruvate , oxaloacetate and dihydroxyacetone phosphate . The metabolic pathway can be found universally in all living things. In humans and vertebrates , the starting materials are amino acids that come from the breakdown of proteins . Plants , fungi , most bacteria and some invertebrates can use the glyoxylate cycle to produce glucose from acetyl-CoA and thus from fatty acids .

Need for gluconeogenesis in humans

The daily glucose requirement of an adult person is around 200 g at rest, 75% of which is used by the brain and a large part of the rest by erythrocytes . The amount of glycogen stored in the body is around 400 to 450 g. About two thirds of this is stored in the muscles and about one third in the liver. The amount of glucose available in the blood is about 5 mmol / L, which corresponds to about 900 mg / L.

The erythrocytes of humans and mammals do not have mitochondria and are therefore completely dependent on the supply of glucose to generate energy, which they break down via glycolysis and subsequent lactic acid fermentation . The brain meets its enormous need for quickly available energy mainly through the breakdown of glucose. This is the main reason why the synthesis of glucose begins even during relatively short periods of hunger, which takes place mainly in the liver and kidney cortex and less so in the brain, skeletal and heart muscles. Due to the build-up of glucose in gluconeogenesis, the glucose concentration never drops below 3.5 mmol / L (about 600 mg / L). Around 180 to 200 g of glucose can be formed per day.

The course of gluconeogenesis in eukaryotes is distributed over three compartments of a cell . The majority takes place in the cytosol . A reaction step takes place in the mitochondrion , another in the smooth endoplasmic reticulum (SER after English smooth endoplasmic reticulum ), since the necessary for each enzyme ( pyruvate carboxylase and glucose-6-phosphatase ) is present only here.

The starting materials for gluconeogenesis are either (1) pyruvate or oxaloacetate as products of amino acid breakdown and lactic acid fermentation (from lactate ), (2) pyruvate formed anaerobically in muscles ( Cori cycle ), (3) dihydroxyacetone phosphate as a derivative of glycerol from fat breakdown or ( 4) Propionate , which remains after the last step of β-oxidation when uneven-numbered fatty acids are broken down. This is converted by propionyl-CoA carboxylase and a racemase (methylmalonyl-CoA epimerase) into succinyl-CoA , from which oxaloacetate is formed in the course of the citric acid cycle .

The structure of glucose from L- lactate is shown below:

Gluconeogenesis only partially corresponds to the reverse reaction of glycolysis . In glycolysis, however, there are three reactions in which the chemical equilibrium is almost exclusively on the side of the reaction products. These steps, all catalyzed by kinases , are:

To reverse these reactions, the cell would have to be able to build up extreme concentrations. Therefore, these three steps in glycolysis are de facto irreversible and are circumvented in the reverse order in gluconeogenesis as follows:

The other conversion processes are in equilibrium, which is why they also play a role in gluconeogenesis. 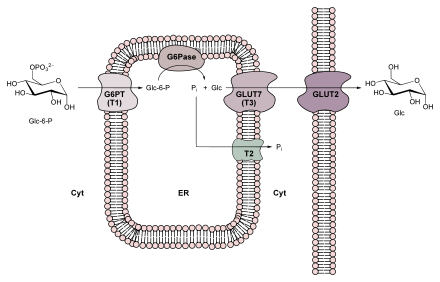 Pyruvate carboxylase is only active with its prosthetic group: biotin . Biotin acts as a mobile carrier of activated carbon dioxide . The biotin is bound to the ε-amino group of a specific lysine residue via its carboxy group . This creates a flexible arm, which allows the biotin group to “swing” from one active center to the second. The carboxylation takes place in two steps:

The first partial reaction depends on the presence of acetyl-CoA, without this no carboxylation of biotin is possible. This regulation is a form of allostery , as a high acetyl-CoA level is a sign of a greater need for oxaloacetate in the citric acid cycle. Acetyl-CoA is a powerful and the only effector of the enzyme. Oxaloacetate can either be used for glucogenesis or is incorporated into the citric acid cycle . The catalyzed reaction of pyruvate carboxylase is an example of an anaplerotic reaction . If there is an excess of ATP, the oxaloacetate is consumed in gluconeogenesis, which means that it is not enriched. The second reaction step of pyruvate carboxylase is acetyl-CoA independent.

Comparison of gluconeogenesis and glycolysis

For the biosynthesis of one molecule of glucose, starting from pyruvate, four molecules of ATP and two molecules each of GTP and NADH are required.

The balance shown below makes it clear that the upper reaction will take place preferentially, since a direct reversal of glycolysis represents a thermodynamically unfavorable reaction:

This means that six ATP equivalents (2 GTP + 4 ATP) are required so that gluconeogenesis can take place to build up one molecule of glucose.

Gluconeogenesis and glycolysis share several enzymatic reactions, but are two completely opposing metabolic pathways. Therefore there is a need for regulation. It takes place in two places: