The glycogen (also glycogen , animal starch or liver strength is) an oligosaccharide or a branched polysaccharide (multiple sugar) consisting of glucose is constructed monomers. As a carbohydrate stored in cells (especially the liver ), glycogen is used for the short to medium-term storage and provision of the energy source glucose in the animal, i.e. also human, organism. Also, fungi and some bacteria use this form of energy storage, while vegetable starch used as carbohydrate stores. The process of building glycogen from glucose is known as glycogen synthesis , and the reverse process of glycogen breakdown is known as glycogenolysis .

In liver and muscle cells in particular, if there is an oversupply of carbohydrates, glycogen is built up until its mass fraction in the liver is 20%. When there is an increased need for energy, the muscle cells use their stored glycogen. The glycogen stored in the liver and kidneys is also broken down into glucose again if necessary, with the glucose being made available to the entire organism via the blood.

Structure of the glycogen 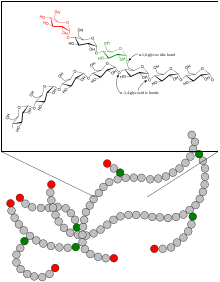 Structure of the glycogen

Glycogen consists of a central protein ( glycogenin ) to which up to 50,000 glucose components are linked, mostly α-1,4-glycosidically . Every 8 to 12 glucose / monosaccharide building blocks, in addition to the α-1,4-glycosidic bond, there is a further α-1,6-glycosidic linkage, whereby the molecule is branched like a tree. If necessary, glycogen can be broken down into glucose at many different points within a molecule. Amylopectin , a component of vegetable starch, has the same structure as glycogen, but has a lower degree of branching because only about every 25th glucose molecule has a 1,6-glycosidic linkage. The molar mass of glycogen is about 10 6 to 10 7 Daltons .

Glycogen in the human metabolism

Starch ingested with food is broken down by the enzyme alpha-amylase (more precisely ptyalin) in the mouth and in the duodenum into the two disaccharides maltose and isomaltose , which in turn are converted into glucose by further enzymes .

The muscles only use their glycogen supply themselves, the liver and kidneys serve as glycogen stores and mainly make it available to other cells. This is particularly important in the sleep state as an energy supply for cells of the adrenal medulla and erythrocytes , since these cells are dependent on glucose as an energy supplier.

The blood sugar level is regulated by means of glycogen build-up and breakdown by various hormones : adrenaline and glucagon stimulate glycogen breakdown, insulin promotes glycogen build-up . Insulin and glucagon are made in parts of the pancreas . The glycogen content of the liver varies depending on the nutritional status of the human body. When hungry, it is less than 1% of the liver's weight. With good nutritional status and a diet rich in carbohydrates, it can grow to up to 20% of the liver weight. Calculated per gram of tissue, the glycogen capacity of the kidneys is higher than that of the liver. But since the liver is the much larger organ, the absolute capacity of the liver is higher.

A so-called core protein is required for the synthesis of a glycogen molecule . This molecule , called glycogenin , forms the center of every glycogen molecule. It itself has a few molecules of α-1,4-glycosidically bound glucose, which are required by glycogen synthase as a primer - this enzyme slides along the existing chain of glucose molecules like a slide on a zipper and cannot itself determine a starting point .

Glucose rarely occurs in its free form in body cells, but is phosphorylated on its 6-carbon atom so that it does not diffuse out through the cell membrane and can also be more easily metabolized. In order for the glucose-6-phosphate to be grown on existing glycogen, it must first be isomerized to glucose-1-phosphate by the enzyme phosphoglucomutase and then activated by uridine triphosphate - UDP-glucose and free pyrophosphate are formed , which are used to drive the synthesis quickly is further broken down into 2 inorganic ( i = inorganic ) phosphate molecules . This activation is catalyzed by the enzyme UDP-glucose-pyrophosphorylase and follows the following equation:

The activated glucose is then attached to the primer or the existing glycogen chain at the non-reducing end by the glycogen synthase :

While the glycogen synthase generates a long chain, another is the enzyme for the branch in charge: The 1,4-α-glucan branching enzyme ( branching enzyme ), cuts the chain every 7 to 12 glucose molecules and adds the cut piece "Laterally" (alpha-1,6-glycosidic) on a chain at least 11 molecules long.

The linear part of the glycogen is broken down by the enzyme glycogen phosphorylase . This is pyridoxal phosphate- dependent. It catalyzes the binding of free phosphate to the C 1 atom of glucose . The glycosidic bond between the glucose molecules is split and glucose-1-phosphate is formed. This can be converted into glucose-6-phosphate by a mutase . Glucose-6-phosphate is the normal form of glucose in a cell. If free glucose were produced, hexokinase IV , an enzyme that also plays a role in glycolysis , would have to produce glucose-6-phosphate from ATP using a phosphoryl group . In addition, an increased concentration of glucose in the cell causes a decrease in the concentration gradient between the cytosol and the extracellular space , so that the glucose transport into the cell is reduced.

In terms of quantity, the muscles have the largest amount of glycogen. But it lacks the enzyme glucose-6-phosphatase , which can split off the phosphate residue on C atom 6 of glucose. This occurs only in liver cells , kidney cells and enterocytes . This means that the liver and kidneys can use their glycogen stores effectively to buffer low blood sugar levels (e.g. at night).

Hormonal regulation of the build-up and breakdown of glycogen 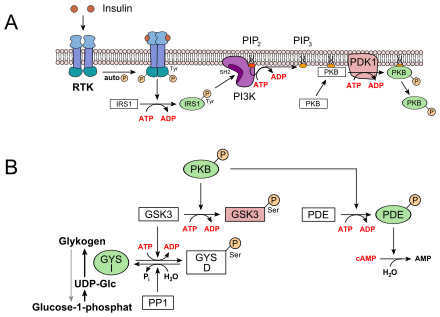 The consequence of this cascade activation is an enormous amplification of the original hormone signal (the nanomolar first messenger ) to a metabolic reaction in the millimole range. CAMP is broken down again by a phosphodiesterase , so that the signal remains for a limited time.

The processes in muscles are analogous, but the typical hunger hormone glucagon does not work there. Insulin, on the other hand, activates protein phosphatase (PP1) and phosphodiesterase (PDE) and thus has an antagonistic effect on stress and hunger signals. Glycogen synthesis is regulated in opposite directions, i.e. That is, it is inactivated by phosphorylation and activated by dephosphorylation, in any case the same kinases and phosphatases being involved in this regulation. The a-form is therefore the dephosphorylated, the b-form the phosphorylated. The latter is only active in the presence of high concentrations of glucose-6-phosphate , such as when there is a large excess of food glucose in the liver. The hormonal regulation is to be understood accordingly, i.e. i.e., insulin stimulates, adrenaline and glucagon inhibit glycogen synthase .