The protein kinase A ( PKA ) is a cAMP-dependent protein kinase and is one of the serine / threonine kinases. Compared to other protein kinases, it is best studied and characterized. PKA is involved in the regulation of energy metabolism ( glycogen , lipids , carbohydrates ). PKA also plays an important role in modifying synapses and controlling ion channels. Finally, special transcription factors are activated via PKA , the so-called cAMP-responsive element-binding protein (CREB). A coactivator ( CREB-binding protein ) enables the transcription of target genes that have a cAMP response element ( cAMP responsive element ).

It is named after the activation by cyclic AMP ( cAMP ), a secondary messenger substance , the intracellular formation of which is triggered by a series of hydrophilic hormones .

In more advanced eukaryotes, in the absence of cAMP, the enzyme is present as a tetramer , consisting of two different protein subunits . This makes it a so-called heterotetramer (R 2 C 2 ). The complex consists of

In lower, unicellular eukaryotes, for example in baker's yeast , in the slime mold Dictyostelium discoideum or in the malaria pathogen Plasmodium falciparum , PKA is present as a heterodimer consisting of one R and one C subunit.

Four isoforms of the R subunit (RIα, RIβ, RIIα, and RIIβ) and three types of the C subunit (Cα, Cβ, and Cγ) have been detected in mammals. The different isoforms can result in a large number of different heterotetramers. This diversity contributes to the specificity and variability in the PKA signaling pathway in the cell.

The R subunits all have a similar structure and differ in overall length. A dimerization domain is located at the N terminus, through which both R subunits contact each other. In addition, the so-called A-kinase anchor proteins (AKAP) can bind to the PKA through this N-terminal domain. At the C-terminus there are two cAMP binding domains that enable cAMP to bind. There is an autoinhibitory sequence between the N and C terminus. It serves as a recognition sequence for the C subunit. As a result, the substrate binding site of the C subunit is blocked until the C subunit is released after activation of cAMP.

The N-terminus of the C-subunit is modified with myristic acid . However, the meaning of this is not yet understood. 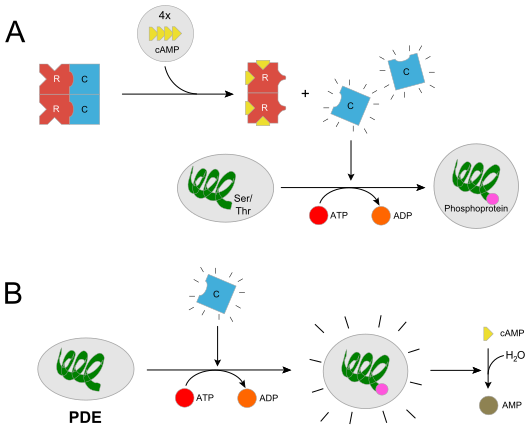 (A): Activation of protein kinase A from higher eukaryotes. General activation mechanism through cAMP. The free C subunits phosphorylate a number of substrates on specific serine or threonine residues with consumption of ATP. (B) A substrate for PKA is phosphodiesterase (PDE). After phosphorylation, it is in an active state. As a result, the PDE catalyzes the hydrolysis of cAMP to AMP, so that the activity of the PKA is reduced or goes out (feedback control).

In higher eukaryotes the R 2 C 2 complex is inactive because the regulatory subunits block the catalytic center of the C subunit. The cooperative binding of two molecules of cAMP to the R subunits leads to dissociation of the complex into an R 2 complex and two active C subunits. The enzyme complex is already activated by cAMP concentrations of the order of 10 nM (10 −9 mol·l −1 ). A large conformational change is triggered by binding of cAMP to the R subunit. In higher eukaryotes four molecules of cAMP are bound, in lower two molecules. As a result, the affinity between the R and the C subunits is lowered by a factor of 10,000 to 100,000, so that the C subunits can dissociate. The free C subunits can now phosphorylate a number of substrates, the PKA is active. Here, substrates are phosphorylated on specific threonine or serine residues by transferring the γ-phosphate group to ATPs. The activity of the PKA extends over several minutes in cytosolic substrates. If the PKA phosphorylates transcription factors in the cell nucleus, their duration of action is extended by several hours.

PKA has a multitude of effects both in the cytosol of a cell ( interconversion of enzymes) and in its nucleus (activation of transcription factors ). In the cytosol, it mediates both glycogen ( glycogenolysis ) and lipid breakdown ( lipolysis ).

The hydrolysis of fats ( triglycerides ) is controlled by PKA-regulated lipases . At the same time, a pacemaker enzyme for fatty acid synthesis , acetyl-CoA carboxylase , is inhibited, which further increases the lipolytic effect of cAMP.

The protein sequence that is the target of phosphorylation by the PKA has the consensus sequence Arg -Arg-x-Ser-x, where x is preferably a small, hydrophobic amino acid.

The subunits of the PKA each come in different forms, e.g. B.

the latter differs from the RI isoform in that it can be autophosphorylated. The RII subunit can be phosphorylated at one site by the C subunit of the holoenzyme (R 2 C 2 ). However, this does not cancel the inactive status.

The C subunit has two specific serine / threonine phosphorylation sites. These are threonine 197 and serine 338, the former is in the activation loop of the C-subunit. Thr 197 is the target of autophosphorylation. Three amino acids are important for the catalytic activity of the C-subunit: aspartate 166, lysine 168 and aspartate 171. These three amino acids are highly conserved in all serine / threonine protein kinases.

The PKA is not only regulated by the amount of cAMP. It is known that it can also be regulated by its subcellular location. The PKA, which has an RII subunit, associates with the cytoskeleton and with the Golgi apparatus. This is mediated by a special protein, the protein kinase A anchor protein .

There is also a feedback control mechanism. Here the PKA activates a cAMP phosphodiesterase (PDE; see Fig. (B)). The activated PDE hydrolyzes cAMP to AMP. This shuts down the activity of the PKA itself or comes to a standstill. This is particularly useful when there is no longer any extracellular signal for the formation of cAMP. Under these circumstances, this second messenger should be deactivated quickly.