Adrenaline (formed 1901 from latin ad on 'and reindeer , kidney') or epinephrine (1900 formed from ancient Greek ἐπί epi on 'and νεφρός nephros , kidney') is a adrenal medulla formed hormone belonging to the group of catecholamines belongs. Adrenaline also occurs in the central nervous system , where it is present as a neurotransmitter in adrenergic nerve cells . Adrenaline mediates its effects by activating G-protein-coupled receptors , the adrenoceptors . The more effective form L-adrenaline came on the market as suprarenine (from the Latin supra , 'over') before 1919 .

Once released into the blood, adrenaline mediates an increase in the heart rate , an increase in blood pressure caused by constriction of blood vessels and a dilation of the bronchioles . The hormone also causes a rapid supply of energy through fat breakdown ( lipolysis ) and the release and biosynthesis of glucose . It regulates the blood circulation (centralization) and the stomach - intestinal -Tätigkeit (inhibition). As a stress hormone , it is involved in the " fight-or-flight response ".

Adrenaline has a stereocenter, so there are two enantiomers . If the name "adrenaline" is not identified by a descriptor , the naturally occurring ( R ) - (-) - adrenaline is meant. ( S ) - (+) - Adrenaline, on the other hand, has practically no meaning.

The first evidence of a substance occurring in the adrenal medulla and released from there into the bloodstream, which could be stained with iron (III) chloride , was found in 1856 by the French physiologist Alfred Vulpian . The practicing physician George Oliver and the physiologist Edward Albert Schäfer established in 1893/94 that this substance must have extraordinary pharmacological properties . The same was achieved in 1894 by the Krakow physiologist Napoleon Cybulski with his assistant Władysław Szymonowicz . In 1896 the ophthalmologist William Bates published his observations.

John Jacob Abel presented the still impure substance in 1897 and 1900 respectively and gave it the name "Epinephrine". Inspired by his work, Jokichi Takamine and Thomas Bell Aldrich (1861–1938) isolated these in 1901 and had them marketed by Parke, Davis & Co. under the name “Adrenalin”. Although Abel's epinephrine later turned out to be an artifact of isolation, the name epinephrine is still used as a synonym for adrenaline.

In 1904, the formula and chemical synthesis followed by Stolz in Höchst . In 1908 Fritz Flaecher (1876–1938) succeeded in separating the racemate into the two enantiomers , with the more effective L-form being brought onto the market under the name Suprarenin . In 1919 Reinhard von den Velden (1880–1941) carried out the first intracardiac adrenaline injection.

Adrenaline was the first hormone to be manufactured and its structure determined. Further adrenaline research led to the body's other two catecholamines, noradrenaline and dopamine .

The biosynthesis of adrenaline starts from the α- amino acids L - tyrosine or L - phenylalanine . These are hydroxylated to L-DOPA . After decarboxylation to biologically active dopamine, enantioselective hydroxylation to noradrenaline takes place , which can also be released from the adrenal medulla and also acts as a transmitter in sympathetic neurons. The N -methylation of noradrenaline ultimately supplies the adrenaline. The normal concentration of adrenaline in the blood is below 100 ng / l (around 500 pmol / l).

Biosynthesis of adrenaline: excerpt from the phenylalanine-tyrosine metabolism

The biosynthesis and release of adrenaline can be controlled by nerve stimuli, hormones or drugs. Nerve irritation promotes the conversion of L- tyrosine to L- dopa and of dopamine to norepinephrine. Cortisol , the hormone in the adrenal cortex , promotes the subsequent conversion of noradrenaline to adrenaline.

After its release, adrenaline is broken down again relatively quickly. The plasma half-life of adrenaline is only one to three minutes when administered intravenously. The enzymes catechol-O-methyltransferase (COMT) and monoamine oxidase (MAO) are particularly involved in the breakdown of adrenaline . The primary degradation product metanephrine (see metanephrine ) formed by O-methylation (COMT) no longer has any significant biological activity. Metabolism to vanillin-mandelic acid and 3-methoxy-4-hydroxyphenylethylene glycol (MOPEG) is possible through further, in particular oxidative, metabolic processes involving monoamine oxidase . These metabolic products are excreted in the urine in conjugated (e.g. as sulfates ) and unconjugated form . The reliable qualitative and quantitative detection of all metabolites is achieved through the coupling of different chromatographic methods.

Adrenaline is a stress hormone and as such creates the prerequisites for the rapid provision of energy reserves that are supposed to ensure survival in dangerous situations ( fight or flight ). These effects are mediated at the subcellular level through activation of the G-protein- coupled adrenergic receptors.

Of particular importance is the effect of adrenaline on the cardiovascular system. This includes u. a. the increase in the central blood volume, which occurs through contraction of small blood vessels , especially in the skin and in the kidneys , via the activation of α 1 -adrenoceptors . At the same time, a β 2 -adrenoceptor -mediated expansion of central and muscle supplying blood vessels is observed.

Chronically elevated adrenaline levels have been associated with hypertrophy of the heart.

Observed central nervous effects as a stress hormone are viewed as reflective, since adrenaline formed in the adrenal gland can not cross the blood-brain barrier . Regardless of this, locally produced adrenaline could be detected as a neurotransmitter in some neurons of the central nervous system. These neurons occur particularly in the area of ​​reticularis superficialis ventrolateralis . The exact function of these adrenergic neurons is not yet known, but a role in central blood pressure regulation and the baroreceptor reflex is being discussed. The central nervous system perceives the stressor, then the hypothalamus becomes active and activates the sympatheticus. Its stimulating effect on the adrenal medulla causes it to release adrenaline and noradrenaline.

As a result of the release of adrenaline or a local application of adrenaline, sweat production , goose bumps (pilomotor reflex) and pupillary dilation ( mydriasis ) can be observed. You also get a dry mouth. Adrenaline is also involved in blood clotting and fibrinolysis . 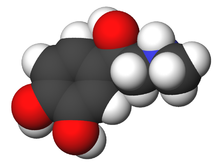 Adrenaline (chemically: ( R ) -1- (3,4-dihydroxyphenyl) -2- ( N -methylamino) ethanol) belongs to the group of catecholamines , which also includes noradrenaline and dopamine. The effective form ( eutomer ) of adrenaline has stereochemically an ( R ) configuration [( R ) -adrenaline or (-) - adrenaline]. ( R ) -Adrenaline is about 20 to 50 times more effective than ( S ) -adrenaline.

Several processes are described in the literature for the synthesis of adrenaline. The classic synthesis process comprises three steps: Pyrocatechol ( 1 ) is acylated with chloroacetic acid chloride ( 2 ) to give 3,4-dihydroxy-ω-chloroacetophenone ( 3 ) . The reaction corresponds indirectly to the Friedel-Crafts acylation , the preferred route nevertheless leads via the ester intermediate and thus includes a Fries rearrangement . Amination of the chloroacetophenone with methylamine gives the adrenalone ( 4 ); the subsequent reduction yields racemic adrenaline ( 5 ). The racemate resolution is possible with the help of (2 R , 3 R ) - tartaric acid .

Alternatively, 3,4-dimethoxybenzaldehyde can also be reacted with hydrocyanic acid to form cyanohydrin , the oxidation of which then yields a nitriloketone. Catalytic reduction produces an amino ketone , whose gentle N - methylation then yields the secondary amine . Adrenaline is then obtained through hydrolysis of the phenyl ether functions , reduction and racemate resolution.

Adrenaline as a drug

In medicine , adrenaline is mainly used as an emergency medication for cardiopulmonary resuscitation in cardiac arrest and anaphylactic shock . It is available in various dosage forms and requires a prescription .

For use in emergency medicine , adrenaline is administered intravenously , alternatively intraosseously or, very rarely, intracardially . In the current recommendations of the European Resuscitation Council , the administration of adrenaline during resuscitation is recommended as the standard. In a large placebo-controlled study, the use of adrenaline during resuscitation outside the hospital was shown to improve survival, but this was also associated with a higher number of neurological damage.

Another main area of ​​application of adrenaline in medicine is circulatory shock , for example in anaphylactic reactions or sepsis . Treatment of anaphylactic reactions and anaphylactic shock is via intramuscular administration of adrenaline. If there is no improvement in condition with intramuscular administration during acute shock , adrenaline can also be administered intravenously titrated. For patients with severe allergic reactions in the past (. Eg impending suffocation due to swelling of the glottis ( glottis )) are adrenaline-filled syringes are available, which then can be applied by the person concerned after allergen exposure with early symptoms themselves.

For use in cardiopulmonary resuscitation and in shock, the centralizing effects of adrenaline are in the foreground. Activation of α 1 -adrenoceptors constricts small blood vessels in the skin and kidneys, while large central blood vessels are widened. In this way, adrenaline is said to increase coronary and cerebral perfusion pressure.

Adrenaline is available as an inhalation solution (InfectoKrupp Inhal ® ) for use as additional medication in acute subglottic laryngitis (" pseudo-croup ") . Up to 2002, inhalation preparations containing adrenaline were also approved for the acute treatment of bronchial asthma in Germany. However, when the CFC ban came into force , these were withdrawn from the market. The inhalative use of other adrenaline preparations for the acute treatment of asthmatic complaints is therefore outside of the drug approval and corresponds to off-label use .

The use of adrenaline in respiratory diseases is based on its bronchial relaxing effect, which is mediated by activation of β 2 -adrenoceptors. However, systemic side effects after absorption must be accepted.

Adrenaline can also be used to narrow the blood vessels locally in the event of bleeding. The vasoconstricting effect is also used to close cuts in boxing . This vasoconstrictive effect is based on the activation of α 1 -adrenoceptors of small blood vessels in the skin and muscle tissue and their subsequent narrowing.

Adrenaline is also used as a vasoconstrictive additive to local anesthetics to slow down their removal and thus extend their duration of action.

Adrenaline is the drug of second choice for beta blocker poisoning and can be used when no specific beta agonist is available. However, there is also no drug approval ( off-label use ) for this emergency use .

The side effects of adrenaline largely correspond to its main effects and are due to its importance as a stress hormone. Adrenaline leads to a contraction of small blood vessels, especially the skin and kidneys, combined with an increase in blood pressure and, especially when applied locally, occasional necrosis . With systemic use, cardiac side effects such as B. heart failure, angina pectoris attacks , myocardial infarction, tachycardiac arrhythmias, up to ventricular fibrillation and cardiac arrest in the foreground. Therefore its application is partly controversial. The systemic use of adrenaline can also lead to an increase in the blood sugar level ( hyperglycaemia ), a decrease in the potassium level ( hypokalaemia ), metabolic acidosis and a decrease in the magnesium concentration ( hypomagnesaemia ). Furthermore, mydriasis, micturition difficulties , salivation, sweating with simultaneous feeling of cold in the extremities, nausea , vomiting , dizziness and headache can be observed. The psychological side effects of the use of adrenaline can include restlessness, nervousness, anxiety, hallucinations, convulsions and even psychoses.

Some inhalation anesthetics, which sensitize the heart to catecholamines, lead to an increased effect of adrenaline on the heart and thus to an increased risk of heart failure, angina pectoris attacks, myocardial infarction and tachycardiac arrhythmias.

The effects and side effects of adrenaline can also be increased by inhibiting the depletion of adrenaline or by increasing the release of (nor-) adrenaline. This can be observed particularly with simultaneous use of MAO inhibitors , levodopa, L-thyroxine , theophylline , tricyclic antidepressants and reserpine .

In turn, adrenaline inhibits the antihypertensive effects of alpha blockers and the cardiac effects of beta blockers. Since adrenaline increases blood sugar levels, the effectiveness of oral antidiabetic drugs is reduced.

Trade names according to dosage form

Example of an auto-injector (with the protective cap removed), as it is often carried by allergy sufferers as emergency care.