The gentle slope of the continental slopes has not yet been satisfactorily clarified, because sediment packages could form stable slopes under water with a slope of up to 15 °. One explanation for the low inclination is the influence of so-called internal waves , waves at the interface of water layers of different densities. Despite the slight incline of the slopes, it happens that their sediments start moving in the form of streams of suspension .

Mudslides on the ocean floor

As part of the Ocean Drilling Program (ODP), geoscientists are investigating the existence of solid gas-water connections (so-called gas hydrates ) on several continental margins. It was possible to show the possible connection between gas hydrates and submarine "mudslides", so-called suspension or turbidity flows, which today sometimes cause damage to submarine cables or drilling rigs . On the basis of the time delay with regard to the occurrence of the functional failure of the submarine cables during the passage of turbid currents, their speed could already be determined in the first half of the 20th century. The turbidity flows are traced back to the sliding of unstable, water-saturated sediments from the shelf edge, triggered for example by earthquakes . Sedimentary rocks that are formed during such events, called turbidites , can be found today in the Alps, for example. These originate from the time when a deep sea basin, the Alpine pre-depth , was expanding north of the emerging Alps and the tectonic processes often led to severe earthquakes. In other parts of the world, too, turbidites can often be detected in the sedimentary sequences of former continental margins. 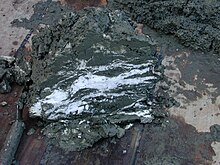 The so-called methane hydrates , chemical compounds mainly consisting of methane and water, which, due to the high pressure and low temperatures in the depths, are present in solid form in the sea floor as "methane ice" , apparently have a special influence on the formation of turbidity currents . If the pressure decreases or the temperature increases, they become unstable, disintegrate and the methane escapes from the sediment. This in turn destabilizes the sediment layers. Particularly towards the sea from estuaries , where a lot of sediment is delivered and therefore dangerously steep slope angles arise, the disintegration of methane hydrate can trigger the sliding of sediment masses, which then make their way down the continental slope, similar to a snow or dust avalanche on a mountainside.

Digital 3D elevation model of the North Atlantic with marking of the position of the Storegga slide. The relief is shown here extremely exaggerated , so that the continental slope appears very steep.

If particularly large clods slide off the shelf edge, the associated displacement of seawater can trigger tsunamis . The same probably happened with the Storegga slide, of which a huge rubble and mud pile on the continental slope off central Norway is evidence. So much methane leaked here in the early Holocene (around 8,200 years before today) that large areas of the shelf edge slipped several times.

In such processes, the submarine cables, which are so important for IT and the Internet, are at risk. ODP experts point out that the offshore production of natural gas and crude oil in the vicinity of gas hydrate deposits could contribute to the destabilization of these deposits. They could endanger oil rigs not only in the North Sea , but also off the North American Atlantic coast (Blake Ridge) and off Oregon or in the Gulf of Mexico , where natural gas is already being produced or in the near future.

The research carried out in the area of ​​the continental slopes gives clear indications that large amounts of hydrocarbons are stored in the seabed here . In our latitudes, apart from Norway, for example, the seabed north-west of Ireland or south-west of Spain should be mentioned. Methane gas accumulation is also suspected in the Mediterranean.