The ocean floor (including sea esboden or seabed called) is that of sea water covered part of the lithosphere of the Earth and takes 71% of the planet's surface one. In the area of ​​the continental margin it consists of continental crust , in the other areas of oceanic crust .

On the global average, ocean floors are around 3.8 km below sea ​​level (Kossinna, 1921). The vast and deep sea basins contrast with a much lower mean height of the continents , which is only around 800 m, which is due to the extensive flatlands, which cover around ten times more area than the mountains .

While general language under the ocean floor of the more or less solid ground of the oceans, so the sea floor , regardless of sediment covering and composition of magmatic resulting substrate , it is understood the term ocean floor (but not the sea floor ) in the geology and there specially in connection with the Plate tectonics largely identical in meaning to the expression oceanic crust . This means that it only relates to the igneous parts below any existing sediment cover and only to those parts with a chemical composition that corresponds to that of so-called MOR basalts .

The relief of the ocean floors 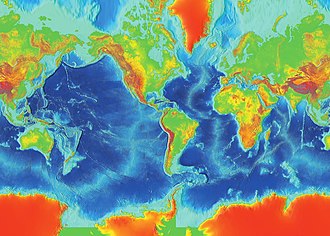 Physical world map showing the relief of the ocean floors (World Data Center for Marine Geology & Geophysics, 2000). Among other things, clearly recognizable the shelves and the network of mid-ocean ridges.

The nature of the seabed is more uniform than the mainland , because it is exposed to significantly less erosion than large parts of the mainland surface. Erosion on the seabed occurs mainly through wave movement , currents and mass movements , and to a lesser extent also through icebergs . The deep sea in particular is therefore hardly affected by erosion.

The large-scale relief of the ocean floors or the presence of certain surface shapes is closely related to plate tectonics . These surface forms, caused by plate tectonics, include the mid-ocean ridges and the deep-sea channels .

From the continental shelf to the deep sea

Like a belt, a Flachsee region, the shelf , also known as the continental shelf , lines the mainland areas of the continents . The shelf represents stretched and thinned continental crust and is usually only a few hundred meters deep. Its width varies between a few kilometers and 1500 km in the Arctic Ocean off Siberia . An example of a very extensive and deep shelf area is Zealandia in the Southwest Pacific.

During the cold periods of the Pleistocene (“Ice Age”), when global sea ​​levels were significantly lower than today, large parts of the shelves were dry, so that larger currents could cut deeply there. These ice age river valleys exist today in the form of so-called submariner canyons and are further shaped by submarine erosion processes.

The mid-ocean ridges , with a total length of 60,000 km, form the longest connected mountain system on earth. The mid-Atlantic ridge alone is over 15,000 km long. Despite their name, mid-ocean ridges do not necessarily run in the middle of an ocean basin. The mid-Atlantic ridge can serve as a prime example of a mid-ocean ridge that runs exactly along the longitudinal axis of the ocean basin. The East Pacific Ridge, on the other hand, is anything but “mid-ocean”. One of the reasons for this is that the Atlantic, as an ocean basin, is geologically much younger than the Pacific.

The mid-ocean ridges rarely rise so far that they are visible as islands on the sea surface. An extreme case is the extremely large island of Iceland , in which several geological phenomena interact. The crest of the mid-ocean ridges is criss-crossed by a central rift zone along its entire length. The crest and rift zone are often offset from one another by transverse fractures , the transform faults .

The mid-ocean ridges are the result of very productive volcanic activity along the seams of two diverging tectonic plates (divergent plate boundaries). There, basaltic magma rises from the earth's mantle and solidifies to form a new sea floor. The corresponding process is called ocean floor spreading and the rock that is primarily formed is called MOR basalt . The appearance of the spreading zones as submarine mountain ranges is caused by the fact that the young basalt, which is still warm deep inside the crust, has a lower density and therefore more buoyancy than the many millions of years older and cooled basalt that underlies the deep sea plains.

At certain points in the oceans there are narrow, elongated, arched depressions. These structures, known as deep sea ​​trenches (outdated deep sea trenches ), are on average 40 km wide and 6 km deep. There are the deepest parts of the oceans. In some of these channels, the seabed is up to 11 km deep.

Deep sea women can only be found in so-called subduction zones . This means that they follow a different form of plate boundaries of the earth's crust: There, heavier oceanic crust parts push themselves under lighter continental or oceanic crust (convergent plate boundary) with a few centimeters per year. The deep-sea channels represent the areas where the crust of the submerged plate bends downwards. In addition to the deep sea, subduction has other side effects. This includes pronounced volcanism on the non-submerged plate, through which arched volcanic mountain or island chains are formed in the immediate vicinity of the channels. In the Pacific , the only ocean at the edges of which there are extensive subduction zones, this volcanic chain system is known as the " Pacific Ring of Fire ".

Only a fraction of the life forms that can live under the extreme conditions of lack of light and the high pressure at the bottom of the deep sea have been researched. Because almost all the sediments of the deep sea floor are lost or at least heavily tectonically stressed during subduction, relatively little is known about the living world of the oceanic deep sea of ​​past geological ages.

In addition to the mid-ocean ridges, there are also underwater mountains and mountains that are not directly related to plate tectonics. Its origin is also volcanic, but this volcanism is caused by individual hot spots ("hot spots") in the upper mantle. This creates submarine basaltic mountains ( seamounts ) and plateaus , mostly far away from the plate boundaries , which can grow up to the surface of the sea. The basalt is chemically slightly different from the basalt of the mid-ocean ridge and is known as OIB basalt ( Ocean Island Basalt ). Well-known examples of such mountains and plateaus are the Hawaiian Archipelago in the Central Pacific and the Kerguelen Plateau in the southern Indian Ocean . The Hawaiian Archipelago is also only the geologically youngest section of an elongated chain of islands and seamounts, which was formed over the course of many millions of years primarily by the drift of the Pacific plate over a hot spot (see →  Hawaii-Emperor chain ).

The soils of most inland seas are relatively poorly structured, as can be seen in the examples of the Baltic Sea (a shelf or epicontinental sea) and the Caspian Sea (an isolated, old, tectonically largely calm ocean basin). The Mediterranean is an exception : it is also the remainder of an old ocean basin (see →  Tethys ), but lies in the tectonically highly active area of tension between the African and Eurasian plates , which is particularly evident in the eastern Mediterranean. In the Hellenic Trench off the west coast of the Peloponnese , it reaches a depth of around 5000 meters, while in the center of the Aegean Sea it is only a few 100 meters deep at most. As Africa moves steadily north, the Mediterranean basin closes. It will therefore become ever narrower in the geological future, silt up and finally be lifted out as an extensive mountain range of folds .

Age of the ocean floors 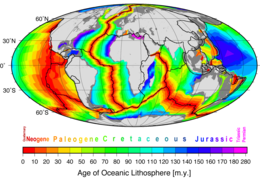 World map showing the age of the ocean floors. Note the almost perfectly mirror-symmetrical pattern of the crustal strips of the same age, at least in the Atlantic.

The present-day oceanic crust (i.e. the ocean floor in the narrower, plate-tectonic sense) found in deep boreholes in the sea floor was mainly formed in the geological periods of the Jurassic , Cretaceous and Cenozoic Era , based on radiometric dating . The fact that older crust is only preserved in exceptional cases is due to the fact that the crust continuously formed in the oceanic spreading zones is destroyed again in the subduction zones (see above ). The weak but measurable magnetization of the oceanic crust generated by the earth's magnetic field is used to determine the age of rocks that cannot be dated radiometrically (see →  magnetostratigraphy ).

Sediments of the ocean floors

Ocean floors are mostly covered with deep-sea sediments , the thickness of which averages 800 m, but in extreme cases varies between 0 and 5 km. Since ocean floors constantly renew themselves from the mid-ocean ridges and submerge again at the ocean margins in the subduction zones , the sediment thickness increases with increasing distance from the ridges. Depending on the water depth, the deposits are divided into shallow sea and deep sea deposits. Roughly simplified, it can be said that the size of the sediment particles decreases the further you are from the coast.

The shallow sea comprises the part of the continental shelf that is washed over by the ocean, also called the continental shelf . This area is sometimes heavily moved by surf , tides and currents . There the sediments also consist of sand and gravel , and in the tropics also to a large extent of carbonate material (e.g. coral reefs ).

Far more than half of the sea floor consists of deep-sea deposits. These so-called offshore muds contain almost exclusively very fine-grained material and consist of clay particles and carbonate and / or silicate residues of micro and nannoplankton .

Systematic exploration of the seabed began with depth measurements, which have been carried out with echo sounders since 1922 . During the journey, sound waves are sent to the sea floor, which are reflected there and recorded as an echo by a receiver.

The first printed, still very detailed bathymetric map of a larger oceanic area appeared in 1853 on the basis of plumb measurements by the US research vessel Dolphin under the later Rear Admiral Samuel Rhoads Franklin . The Dolphin was to explore the Central Atlantic for a suitable route for laying a transantlantic telegraph cable.

Later, researchers tried to dive into greater depths themselves. Thus achieved Jacques Piccard and Don Walsh with a submersible vessel in Marianengraben a depth of 10,916 m.

A well-known physical world map , which also includes the relief of the ocean floors, was drawn, probably in 1977, by the Austrian graphic artist Heinrich C. Berann . The map was based on the oceanographic mapping work carried out from 1957 by geoscientists from the Lamont-Doherty Earth Observatory Marie Tharp and Bruce C. Heezen .