The title of this article is ambiguous. Further meanings are listed under Remanence (explanation of terms ) . 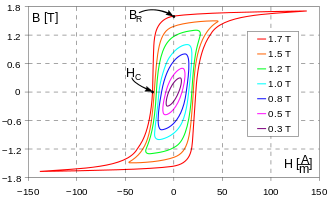 Under the ( magnetic ) remanence M R , and retentive or ( back ) permanent magnetism , residual magnetism or remanence mentioned, is meant those magnetization that a previously by an external magnetic field H , z. B. saturated with a current-carrying coil (i.e. maximally) magnetized particles, after removal of the external field. In diagrams that plot the magnetic flux density B over H , the remanent flux density remains for H = 0 . Magnetic remanence is inherent in all ferromagnetic materials and, depending on the area of ​​application, desirable or undesirable, even if it has different degrees of strength.

Magnetic remanence forms the basis for all storage methods based on magnetism such as hard disks , floppy disks , magnetic tapes ( tape , compact cassette , MAZ , streamers ), in which magnetic materials such as iron (III) oxide - or Chromium (IV) oxide crystals are magnetized on the surface of the data carrier and retain their remanence even after the magnetic field has been removed - i.e. after the writing or speaking head has moved away again. Magnetic data storage media such as hard disks, magnetic tapes, magnetic cards are inconceivable without remanence, as are the permanent magnets found in many everyday applications, such as loudspeakers or bicycle dynamos .

In contrast, magnetic remanence z. B. for switching on transformers , since these can then no longer be switched on optimally in the voltage peak without inrush current, as the (outdated) textbook theory says.

Magnetic remanence is also undesirable in cutting tools such as scissors, knives and turning tools. The accidental contact of tools with permanent magnets or their mechanical overload can lead to them becoming permanent magnets, so that afterwards chips or objects can stick to them.

With relays , when the actuating coil is de-energized, the armature is safely dropped by an air gap (brass rivet, foil, etc.).

Even lifting magnets can sometimes not "let go" of magnetizable loads and require an air gap.

In the event of unwanted magnetization, magnetic heads can show altered playback properties or change the recording.

The mask in color picture tubes , if it is magnetized, leads to errors in the color reproduction.

In the wild, remanently magnetized material is found in the form of rocks that contain ferromagnetic minerals (e.g. magnetite ). The external magnetic field that is responsible for this remanent magnetization is usually the earth's magnetic field .

The magnetization can take place in different ways. In igneous rocks , all ferromagnetic mineral particles align themselves with the earth's magnetic field when the melt cools down when it reaches its Curie temperature , whereby the rock is permanently magnetized. This process is called thermoremanence or thermal remanence .

In the case of metamorphic rocks or rocks that have been transformed in some other way (e.g. by chemical weathering or during diagenesis ), the newly formed ferromagnetic particles have grown in alignment with the earth's magnetic field. This process is called chemoremanence or chemical remanence. A special form of chemoremanence is biogenic chemoremanence, which only affects sedimentary rocks : some anaerobic or microaerophilic bacteria (different groups) have iron-rich, membrane-enclosed structures in the cytoplasm, the so-called magnetosome . The magnetosomes consist of small magnetite (Fe III 2 Fe II O 4 ) or more rarely greigite crystals (Fe III 2 Fe II S 4 ), which are surrounded by a double lipid layer. The magnetosome contains up to one hundred magnetite crystals (around 0.1 μm in size), each of which acts as small permanent magnets. These magnetite crystals are usually arranged in chains that add the effect of the small permanent magnets and align the bacterium in the magnetic field like a compass needle ( magnetotaxis ). After the bacteria die, the chains of magnetically aligned magnetic crystals are preserved and document the magnetic field at a certain time in the history of the earth.

Detritic ferromagnetic particles in a sediment are also regulated according to the earth's magnetic field. One then speaks of sedimentation remanence . In this case, coarse particles are fixed in the grain structure relatively early after they are deposited, while finer particles are still mobile in the water-saturated area and can, if necessary, realign themselves if the prevailing geomagnetic field changes. Only with increasing compaction of the sediment into a sedimentary rock are the finer particles and with them the information about the geomagnetic field prevailing at this point in time fixed. This delayed fixation is referred to as post-sedimentation remanence .

The point in time or rather the period in which the magnetization took place can be many millions or hundreds of millions of years ago. Therefore, the corresponding rocks are information carriers regarding the earth's magnetic field in the geological past ( paleo-earth magnetic field ). A well-known example of this are the normal and inverse thermoremanent magnetized strips of oceanic crust that run parallel to the mid-ocean ridges (see →  ocean floor spreading , →  magnetostratigraphy ).

An effect similar to magnetic remanence is the dielectric absorption of electrical capacitors (see also electrets ).