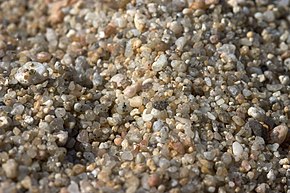 Close up of beach sand . Most of the grains are likely to be made of quartz, but there are also a few rock fragments (dark-stained) clearly visible.

In geology, detritus ( Latin: detritus "abraded") stands for loose mineral substance that is removed from its place of origin by erosion and deposited again in another place. These are either more or less small grains of a particular mineral or correspondingly large fragments of very fine-grained (dense) rock .

Detritus transported and deposited in this way is also referred to in the association as detritic sediment and the corresponding mineral substance in diagenetically modified sedimentary rocks as allothigenic material .

The discharging medium can be both flowing air and flowing water, less often glacier ice. Whilst in a terrestrial environment weathering is responsible for the generation of loose material from surrounding rock , bioerosion plays a not insignificant role in shallow marine environments and the mineral substance often comes from the calcareous skeletons of marine organisms.

While carbonate (primarily calcitic ) detritus is chemically long-term stable (i.e. protected from dissolution) only in a shallow marine environment (see chemical weathering ), silicate detritus, especially quartz and some heavy minerals , is generally not attacked by fresh water either. The place of origin of mainly such silicate detritus is called the delivery area . These are the exposed high areas (above the erosion base ) in the area around a sedimentary basin , in particular the corresponding areas of the catchment areas of the permanent and temporary waters through which the detritus is transported ("delivered") and through or in which it is ultimately is deposited. The size of the detritus grains or particles or the breadth of the size spectrum of the same (grain sorting, also referred to as textural maturity in relation to the sediment ) and their mineral uniformity (homogeneity, in relation to the sediment also referred to as compositional maturity ) provide information the distance from the storage location to the delivery area. The coarser and / or more inhomogeneous the detritus (ie the “more immature” the sediment), the closer ( proximal ) the delivery area, the more fine-grained and more homogeneous the detritus, the further away ( distal it) was the delivery area.

There is a similar detritus term in soil science and water science , but there it mainly stands for remains of living beings, i.e. for decayed (d) organic material.