The Tarim sedimentary basin with the Taklamakan desert, an intermontane basin without drainage. Lower right the highlands of Tibet

A sedimentary basin is an area that is deepened into the uppermost part of the lithosphere as a result of subsidence movements of the earth's crust and which is filled with sediments over geological time periods .

Section through the northwestern edge of the Molasse basin in Hegau . The basement, shown here only by its uppermost rock unit, the White Jura , dips to the southeast, burdened by the thickened crust in the area of ​​the Alps, and the thickness of the molasses (USM, OMM, OSM) increases accordingly to the southeast.

The migration of salt rock from the subsurface in the course of halokinesis results in the formation of relatively small-scale depressions. Sedimentary basins with a very small footprint can also be the result of volcanic activity or weathering . The Eocene sediments of the Messel Pit, known for their mammalian fossils, were deposited in a maar lake , and the hollow forms in which the geologically somewhat younger layers of Oberleichtersbach and Sieblos in the Rhön were deposited are interpreted as collapse dolines .

A sedimentary basin is divided structurally roughly in the filling consisting of sediments and sedimentary rocks is, but also in no small extent volcanic effusion and dykes and pyroclastic sediments may include, and in the lowered bedrock or base member surrounding the underlain the filling and at margins. The floor plan of a sedimentary basin depends on the mechanism of formation. Simple tectonic expansion usually creates elongated structures, pull-apart basins and basins that are created by thermal subsidence can also have more rounded shapes. Also continental margins are called sedimentary basins, although they are only bounded on one side by a high area.

Open contact between the sediment filling and the basement at the edge of the Fundy Basin: red, arcotic sandstones of the Wolfville Formation (in the traditional sense; Central or Lower Upper Triassic, Newark Supergroup ) overlap from about the center of the picture, to the left with increasing thickness, an angular discordant one steep, partly clearly visible folded alternation of grayish and blackish clay , silt and sandstones of the Horton Bluff Formation ( lower carbon ); Rainy Cove, south coast of the Minas Basin, Bay of Fundy , Nova Scotia , Canada. 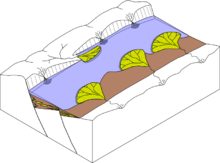 Simplified representation of a sediment basin, here in the form of a half-ditch, in a block diagram. The basement is shown in gray, delta sediments yellowish, rubble fans greenish and other sediments brown.

The amount of subsidence of the basement per unit of time ( subsidence rate ), which is usually on the order of millimeters per year, generally increases from the edge to the center of a sedimentary basin. Because areas of higher subsidence can absorb more sediments than those with lower subsidence, the thickness of the basin filling generally decreases from the center of the basin to the edges. Tectonically caused basins are characterized by so-called basin edge faults (see fault ), where, especially in fossil, partially eroded sedimentary basins, the filling is relatively sharply delimited from the basement at the edge. But even further in the pelvic inside the bedrock is often subjected to interference and can regions of stronger and less severe subsidence have, from which an internal (paleo) morphological structure in thresholds and troughs or sub-basins results (the same applies to regions which are heavily by Halokinese are characterized , for example the North German-Polish Basin). The sub-pool, that is, the areas of greatest subsidence, which thus have the most powerful sediment filling are, as Depozentren (Sing. Depozentrum hereinafter). In the course of the geological history of a sedimentary basin, its depocenters can shift, which is reflected in fluctuating thicknesses of different age stratification intervals in different regions of the basin. How much the subsidence manifests itself morphologically in an active sediment basin depends on the amount of sediment supplied per unit of time (sedimentation rate). If the sedimentation rate fully compensates for or exceeds the subsidence rate, the morphologically highest areas of the basin are at least at the same height as the erosion base, and above it at the basin edges, otherwise they are below.

The introduction of sediment into the basin takes place from the surrounding high areas , which are exposed to erosion , almost always by flowing water, i.e. by rivers and streams as well as by ocean currents. In certain areas of a sediment basin that are characterized by a relatively steep relief, mass movements such as suspension or debris flows are important for the transport or input of sediments.

When subsidence rates are high, the level of the basin often falls below sea level, and the sea then usually penetrates into the corresponding region, especially at the continental margins. Sedimentary basins are therefore often sea basins (see shelf ) with marine sedimentation . With lower subsidence rates or a position very far from the coast, sedimentation tends to occur in lakes and alluvial plains . In geological time periods there is often no sharp boundary between an alluvial or coastal plain and the adjacent sea basin, but this shifts with the rise or fall of the relative or absolute sea level (see transgression and regression ).

The first deposited in a sedimentary basin layers fall with continuing subsidence in an increasingly greater depth, are the weight of deposited layers subsequently compressed ( compaction ) and long term in sedimentary rocks such as sandstone or mudstone transformed ( diagenesis ). In mainland sedimentary basins, the younger (upper) layers of gravel and other loose material often contain significant reservoirs of groundwater .

In mountain formations , stretched crustal areas, on which sedimentary basins with an often complex history had formed, are compressed (inverted) and the deposited sediments are folded and / or stacked , sometimes together with the underlying basement , sometimes also sunk deep into the earth's crust and under high Pressure and high temperatures ( metamorphosis ). It is not uncommon for large parts of a mountain range to consist of the deformed filling of sedimentary basins, for example the Alps and the Himalayas , the rocks of which are largely derived from the deposits on the edges of the Tethys Ocean . From the observation that marine sediments are now found in high mountains, the geosynclinal theory , which is outdated today, arose .

In the course of the gradual subsidence, billions of tons of remains of dead plants (including algae ) collect in the subsidence area and are successively covered by gravel, sand and layers of clay . Where this is done in the absence of air , the organic residues can form coal , crude oil and natural gas . The coalification or thermal ripening of the remains is promoted by the further sinking of the sediment basin, continuous deposition and the rising temperature of the subsoil.

Examples of sedimentary basins in Central Europe are

Examples of sedimentary basins outside Central Europe are

The large plains - a large part of which arose from sinking basins - are not only good soil for settlement , agriculture and industry , but also have many natural resources . Since a large part of mankind also live in the flat and hilly areas of basin landscapes and numerous mineral resources - especially oil, gas and coal - can be found in sedimentary basins, these have been carefully examined and used for centuries. Even today, sedimentary basins, especially outside Europe and North America, are the target of intensive commercial exploration, among other things because the mineral resources of the sedimentary basins in industrialized countries have long been subject to degradation.