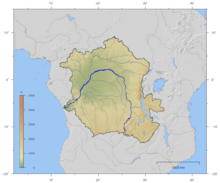 The Congo and its catchment area 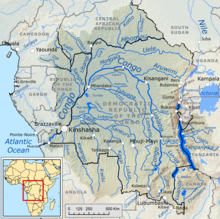 Course and drainage basin of the Congo 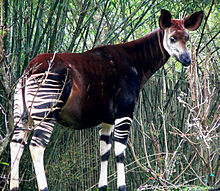 The Congo Basin is located in Africa , in the equatorial region , in a very extensive lowland - basins that the catchment area of Congo - stream includes.

Around a quarter of the world's remaining tropical rainforests are located in this large , bowl-like landscape . After the rainforest of the South American Amazon basin, the Congo Basin contains the second largest uninterrupted tropical jungle area on earth .

Its name, ostensibly determined by the river that flows through it, comes from the historical Kingdom of the Congo , which mainly extended to areas west of the Congo Basin around its outlet, the mouth of the Congo.

The Congo Basin is located in the center of the African continent , in the southern part of the (mainly politically) part of Central Africa , mostly in the area of ​​the Democratic Republic of the Congo , as well as the neighboring Republic of the Congo ; its catchment area extends with the foothills of the basin or with its rainforest areas into the neighboring states of Central African Republic , Cameroon , Equatorial Guinea , Gabon , Angola , and Zambia .

In the west, northwest and north this large landscape or the Congo catchment area, the center of which is only about 300 to 400 m high, merges into the merging mountainous countries, some of which belong to the great north equatorial threshold , of the aforementioned states. In the northeast, east and southeast the Congo Basin borders on the high mountain ranges of the elongated Central African Sill , which slopes down to the East African Rift Valley to the east . It borders Uganda , Rwanda , Burundi and Tanzania as well as the Rwenzori Mountains , which are up to 5,109 m high - the highest point in the Democratic Republic of Congo on the border with Uganda.

In the southeast, the catchment area of ​​the Congo Basin extends over the Mitumba Mountains even to the Muchinga Mountains and thus to Zambia . In the south it reaches the up to 1,500 m high Lundaschwelle and even the highlands of Bié ; so it extends to Angola . In the southwest, the area around the Congo estuary on the southern Atlantic merges into the narrow Zaire coastal lowlands, which are rich in rivers and water . The western part of the core of the Congo Basin slopes down to the Lower Guinea Sill east of the Atlantic, over which the river plunges into the aforementioned lowlands.

Research by NASA (e.g. LIS ) has shown that the Congo Basin, especially west of the Central African Sill , has the world's greatest frequency of lightning.

In particular, the landscape of the Congo Basin is determined by the dense and evergreen rainforests , some of which grow trees over 50 m high, and by the large and water-rich Congo River. Hundreds of small and large tributaries run radially towards the elongated left arch of the Congo.

Almost the entire area is drained via the Congo (mouth 42,000 m³ / s). Only on the Atlantic coast between Cameroon and Angola do the rainforests drain directly into the ocean via smaller rivers.

Because wood export is a very important sector for the Central African economy , over 80% of the rainforests are no longer in an untouched state ; they are more likely to be described as destroyed or disturbed ( secondary forest ). In this regard, the annual forest loss in the Congo Basin, in which around half of the rainforest has been cleared for fell, covers an area of ​​up to 15,000 km². The number of unreported cases , which is based on the illegal clearing and is largely undocumented, makes this value even higher. As in the other remaining rainforest areas worldwide, in addition to illegal logging, improper forestry work (such as slash and burn without subsequent reforestation), lawlessness and corruption are the order of the day in Africa . The mostly embittered indigenous people and other responsible environmentalists , who sometimes vigorously defend themselves against these methods and the human rights violations associated with them , are rarely heard worldwide.

The rainforest of the Congo Basin is an extremely important area for the African fauna , in which thousands of animal species live.