In the original and narrower sense, clearing is the removal of woody plants , i.e. trees or bushes , including their roots . In further detailed explanation, deforestation and the mere cases of trees ( " blow clearing ") without reforestation and the slash and burn and Schwenden ; in these cases, the tree stumps or the roots often remain in the ground.

The aim of clearing forest areas is usually to be able to use the soil for another use ( pasture , arable farming , housing development , traffic route construction ). This is the difference to clear cutting in forestry use, which is usually followed by reforestation. The Austrian Forest Act defines clearing as “the use of forest soil for purposes other than forest culture”. But clearing is also used in the areas of horticulture and viticulture (clearing of vines ). Clearing can also affect only a single tree or bush or a single rootstock.

Clearance, and in particular slash and burn, are the main cause of increasing deforestation in many countries. However, deforestation can also be a consequence of other factors (e.g. unsustainable management, drought , forest fires and storms).

Clearing is a word formation to clear ( mnd. Clearing , mhd. Riuten, reuten , ahd. Riuten ). The variant reuten remained in the south of the German-speaking area as a dialect word well into modern times . Linguistically related is eradicate , a word formation for the outdated verb rotten (mhd. Red , subsidiary form of riuten, reuten ).

The words clearing and clearing can be related both to the affected vegetation (trees and bushes, forest and bushes are cleared) and to the land area (a piece of land, an area is cleared). The similar term deforestation , on the other hand, is always related to the land area (a country, an area is deforested). Clearance is the standard term in the historical context (see the technical term clearing time ). In particular, when naming the specific work, the word clearing and terms such as rootstock clearing or clearing device are used . The modern term deforestation is preferred when it comes to the extent of forest loss, especially when considering large-scale areas (e.g. deforestation in the Amazon region or deforestation of the earth ).

The cleared area can also be described as clearing . Numerous clearing names are a linguistic testimony to medieval clearing in Europe. Like clearing, many of them go back to Middle High German riuten , for example Reutte , Kreuth , Werningerode .

In the case of a (complete) tree clearing, the trees including the tree stump (also called "stick") are cleared in one work cycle. This is possible using chaining , for example . A chain or a wire rope is stretched between two heavy bulldozers to pull out the trees and their roots. In the case of weak trees, the use of a single tractor is sufficient. This practice takes place in forests that have only an insignificant proportion of economically interesting trees.

Often only tree stumps are cleared after the trees have been felled at some point before, or a single tree stump is cleared ( rootstock clearing, stick clearing, root clearing). When clearing roots, the roots are either largely removed (complete clearing) or parts of the root wood are left in the ground (partial clearing).

The rhizome can be torn out with an excavator, leaving the long roots in the ground if they have not been exposed beforehand. Complete clearing can only be achieved with an excavator if it works with a special clearing knife . Special milling machines can mill the stump to a depth of just under one meter, but complete clearing with a milling cutter is difficult. If a stump grinder is used, it is also known as a root stock grinder .

Historically, all kinds of mechanical devices that transmitted strong leverage , for example the forest devil , and later also motorized lifting devices, such as a steam-powered lifting crane, were used to clear root stocks. Alternatively, the tractive effort was provided by a tractor. Explosives were also used.

In manual clearing, the trees are felled with axes or saws and the stumps are removed with a hoe (“Reuthaue”), sometimes with the help of animals (e.g. oxen ).

With mechanical clearing, the tree trunks are felled with so-called wood harvesters (also called "harvesters"), delimbed and sawn into sections (see wood harvesting ). Above all, excavators and special cutters are used to remove the rhizomes (see above).

Felling wood with a chainsaw takes an intermediate position. The sawing work is done by the chainsaw, but it is still strenuous physical work.

Deforestation in the broader sense

The following methods do not remove the stumps or roots. It is therefore imperfect clearing and not clearing in the narrower sense.

Condition after slash and burn south of Santa Fé , Panama

In the case of slash and burn , the cutting off and burning of the vegetation is usually combined. A biology lexicon notes that the word " clearing" is misleading because the root stocks are left in the ground. 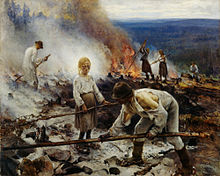 Swinging with fire in a painting by Eero Järnefelt (1893)

The term Schwenden mostly describes a historical method of land reclamation. During Schwenden, the tree population was often first dried out by curling . Undergrowth and undergrowth were removed, as well as branches and again and again the newly emerging shoots ( Schneitelung ). After the tree withered, the following options were available:

The dictionary by Adelung (1793–1801) explains the word schwenden as “to burn down a forest to turn it into portable fields”. Duden states to schwenden : " make arable by slash and burn ". According to the German dictionary of the Brothers Grimm, Schwenden in Austria included burning, debarking, mutilating or drilling trees that were supposed to wither as a result. With reference to a Bavarian source, the meaning of the word is stated: “Remove obstructive trees, approaches to wood, bushes by hacking, drilling, peeling them off, etc. the like first makes it stand up and wither, and then put it away or burns ”. Otherwise there is a lot of variation in the assignment of methods and designations in the old sources. For example, in a Swiss spring, wasting is supposed to denote the thinning of forest, bushes or hedges by means of cuts or hewing - and guard against burning.

In laminar clearing is generally referred to surface clearance . If all the trees are cut on a larger area in a day or in a short time, it is called a clear-cutting or clear-cutting .

Smaller cleared areas are more often referred to as clearing islands (isolated, forest-free areas) or clearing lanes (clearing, for example, along rivers or other guidelines). The cleared islands are often at the beginning of extensive cultivation. 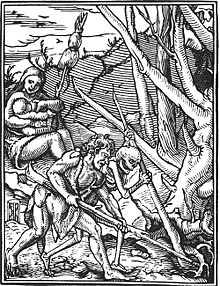 Clearing a forest to gain arable land. Detail from the wood engraving Dance of the Dead (1538) by Hans Holbein the Younger .

View of the hamlet of Hof Steinbach in Baden-Württemberg, which was built as a clearing settlement in the High Middle Ages

Large-scale deforestation have passed since the Neolithic occupied, including through Aulehm deposits in the river valleys and pollen analysis . Slash and burn is likely to have been predominant, as the Neolithic were hardly able to cut up and transport giant trees. After the trees had been previously ringed , which led to their death and drying out, slash and burn was easy. However, the Schwenden can only be proven in historical times.

When swiveling, the time-consuming removal of the roots was not necessary. Another advantage was the lower risk of erosion of the cleared areas, especially in sloping locations, as the roots held the soil. Hacking was possible between the tree stump . The method was unsuitable for plow farming, especially because of the heavy weight of the plows, which were not easy to move.

Many towns and villages in Central Europe originated in the respective clearing time in Rode - or clearing landscapes as a form of internal colonization . An example of this is the settlement of people in the low mountain ranges in forest-hoofed villages .

Forestry has developed from the negative consequences of clearing . Historical descriptions from Central Europe basically coincide with today's images from the tropics. However, due to technical progress and higher population density, the speed of large-scale forest destruction has increased by orders of magnitude, and the consequences for tropical primary forest communities are more permanent. Worldwide, the proportion of forest areas in the total land area is still falling.

Today, clearing activity in Europe mostly only takes place due to infrastructural construction measures and is associated with corresponding requirements for new foundations and reforestation . In other parts of the world - especially the taiga belts of Canada and Siberia , as well as the tropical forest areas  - large-scale clearing is common.