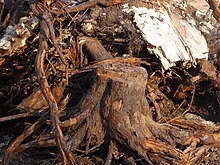 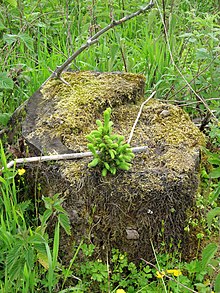 A tree stump (also Strunk , stumps , stumps , Stuken , stuccoes , rootstock , South German Knorz ), forestry Stock timber or Erdstammblock is the remnant of a tree which, after Baumfällung temporarily remains at the Hiebort and out of the soil extends. A tree stump remains also after breaking a dead tree (tree body) or wind break .

A rhizome consists of:

This root system has a lower utility value for wood and can only be salvaged with great effort. However, it is of ecological value.

A tree stump belongs to dead wood and forms a biotope z. B. for certain rare insects or fungi such as the sticky horn . On the other hand, it also forms entry gates for forest pests such as B. the root sponge , which penetrates the roots through stumps and can infect the roots of the surrounding trees in the soil.

In forestry , the tree stump usually remains standing. In the mountain forest he helps to fortify the slope in the meantime until the new stock has grown. It is roughly estimated that one year of rotting time per ten centimeters of stalk height. Problems are sometimes caused by tree stumps with attached root plates, which were torn from the earth during severe storm damage .

In gardening and landscaping , the stumps are often undesirable. They can be dug up for quick removal, which is usually done with an excavator for older trees . For complete removal, a clearing knife , an attachment for excavators, or a stump grinder can also be used as part of the rootstock clearing . A stump is carried out only in exceptional cases, particularly in difficult terrain. In order to encourage the stump to rot more quickly , grooves can be cut into the surface to make it easier for wood-decomposing fungi and bacteria to colonize.

However, some trees, especially hardwood , do not die after felling, but sprout again. These shoots are called stick rash . They can grow into a multi-stemmed tree, but also grow together into a single trunk. This property is used in coppice forest management to regenerate stands. Chestnut , willow , hornbeam and ash are known for this .

Sometimes you can also observe that stumps overwhelm without budding, or that tree stumps do not die off even after many years, although no growth is noticeable. The root system of the remaining tree stump then receives nutrients from the neighboring trees and can thus continue to live for a while.

In the past, clearing tree stumps was a difficult and time-consuming job that had to be done by hand because no suitable machines were available. This work was partly left to poorer people who were allowed to use the excavated stump as firewood as payment.